A better view at the new alignment. 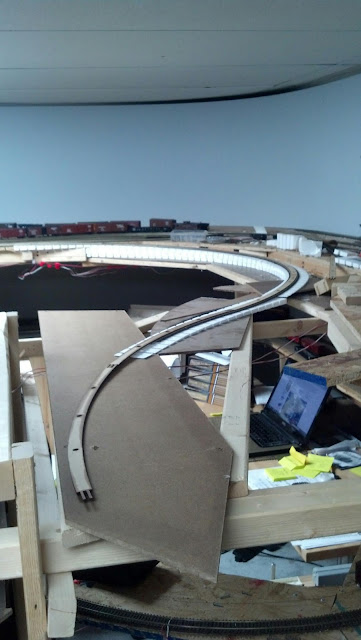 Working on the new alignment for the Berlin Line (this will be the third). It will now be a 2% grade on 30" radius curves and a 36" radius S-curve. The mainline over it will be 28" and 30" radius. Clearance is my minimum - 2.75". But the yard lead will be level for 5 to 6 feet now, and there will be a 4' long 2% grade on the mainline before another level section on top of the helix.
This should help a lot with operations because the whole lead and the passing siding were on a grade before. 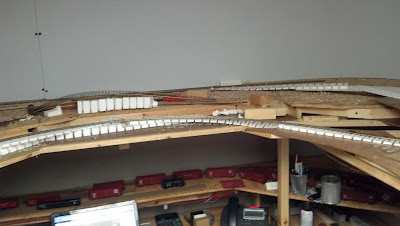 Now both helices are disconnected

Replacing a turnout and modifying the curve while I have ready access. Since I'm improving three clearance here I decided to replace the Atlas turnout with a Micro Enigineering one. It will still probably need a powered switch machine because of its location.
The reason for the Atlas one initially was the cheap and easily installed power switch machine, and because the points are supposed to be flexible enough to run through them if need be, like a spring switch. This would have worked well in this location because of the traffic pattern. It didn't work as week as I would have liked, so I'm swapping it to my standard turnout. Instead I will probably use detection to automatically line the turnout. 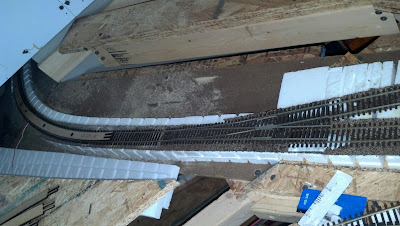 I just cut between the tracks with a circular saw... 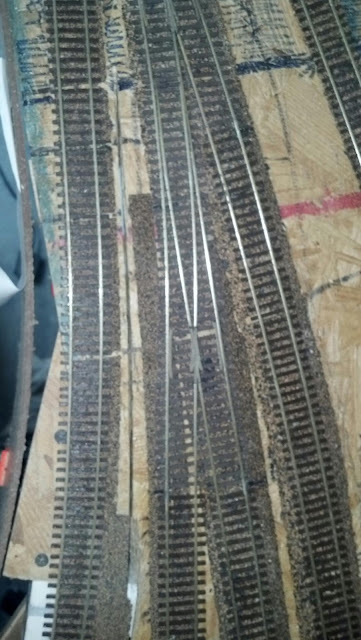 I need to work on getting regular updates here instead of just the True Line Trains Twitter/Facebook/Webpage.

So I'm working on cleaning up the basement, and identifying what I need to work on next. I can lay out some additional trackwork with what I have on hand, but the budget won't allow much more right now. So instead I'm working on specifically planning what needs to be done so when I can coordinate the budget and the help I can make some significant progress.

I did start up the layout and was surprised that I didn't have anything laying across the track and causing a short. Cleaned some locomotive wheels and track and it's still working pretty well. I really want to finish the connection to the east helix again, though. Then I can have trains running continuously while working.

I need to make a small modification on the west end of the layout as well. Fortunately, the track isn't in place yet. I'll be cutting out a section of the OSB deck and replacing it with masonite over the track that leads into the helix. I need about 1/8" (minimum) greater clearance for the TLT U-2-g coal load to fit. I can run it without a coal load, or a shorter one. But pictures of some New Haven locomotives show that it wasn't uncommon for a tender to be loaded above the height of the cab, and I'd like to be able to do that.

This extra clearance it also going to impact the rebuilding of the east side, but I think it will be worth it for the appearance of the locomotives.
Posted by Randy at 11:54 AM No comments: 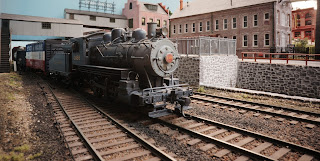 Randy
Posted by Randy at 9:41 PM No comments: