Here are links to Part I and Part II of this series of posts on modeling the NH DERS-2b (RS-2) locomotives.
I covered the pilot grab irons in Part I (although I've started using the jewelers pliers to make the curved bends since it's easier to be consistent), but one of the most challenging parts of identifying what needs to be done is the additions to the pilot that the New Haven made. There are similar modifications to the DERS-1b (RS-1) and DERS-2c (RS-3), but each class has a different configuration.
My original plan was to use the Custom Finishing part #347 RS-2 End Platform Railing Mounted MU hoses. However, closer examination showed that it wasn't an accurate representation.
Here's a picture of 0502 in Pittsfield in c1947/8. You can see that there are two MU receptacles, along with some air hoses mounted on the end railing. Two pipes run down the front of the pilot and work around the buffer. But it looks like there is another pipe of some sort behind the railing, just to the left of center. 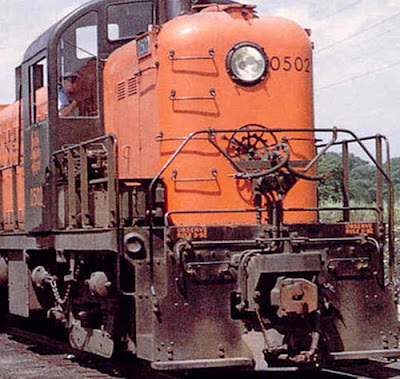 It was the builders photo that clarified that for me. This is 0500.
First, you'll notice that the air hoses weren't installed by Alco, at least prior to this builder's photo. But you can see (particularly if you look at the left end railing), that the MU stands are the pipes that go down into the walkway, just left and right of center.
The air hoses are bent to come in front of the end railing just below the MU receptacles, and the piping is then bent to go to the left of the buffer, and then have elbows connecting them to pipes behind the pilot.
Because these were equipped for passenger service, they also had BARCO steam line pipes. You can see it sticking out of the door beneath the coupler.
Mike Robbins has a photo here that clearly shows the set of doors beneath the coupler, and the BARCO steam line. You can also see how the air lines and other pilot details.
He has another photo, that shows the pilot details even better. I also used this photo to identify details below the walkway on this engineer's side of the locomotive. It also shows the brake equalizer (?) in great detail mounted on the box behind the engineer.
The second group of RS-2s, 0510-0516, delivered in November and December 1948 had the piping routed down through the walkway, there is a single MU receptacle, and also looks like they didn't have the doors over the BARCO air hose, as seen in this Sweetland photo of 0516 in 1954: 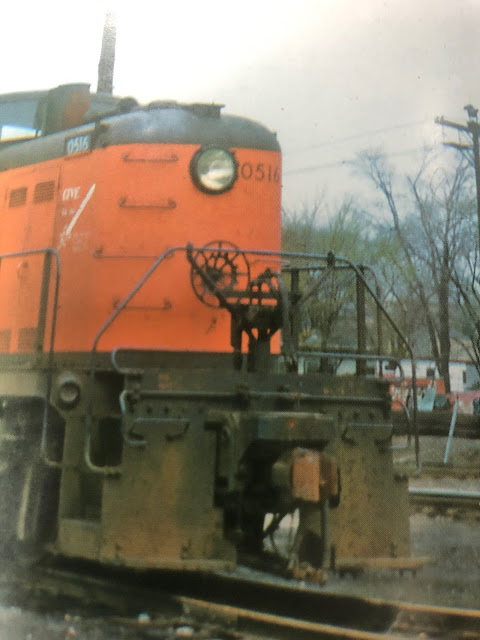 Looking more closely, the end railings are also attached differently than the original delivery, and the uncoupling lever is longer too. These better match the model, but because the railing are so fine and well rendered on the P1k model, I decided not to replace them (I tried though!). I don't have a builders' photo of the second group handy, to see how they were delivered from Alco.
Since 0502 and 0503 are from the first delivery, I'll need the dual MU receptacles and to have the piping visible on the pilot. So instead of using the Custom Finishing part, I cobbled together the ends from several parts.
First, the Kato end railings have the correct MU receptacles (minus the piping that goes into the walkway). I considered using them as is, but the Proto railings are significantly thinner and better looking. So instead I cut the MU receptacles off of the Kato end railings, and glued them to the Proto ones. 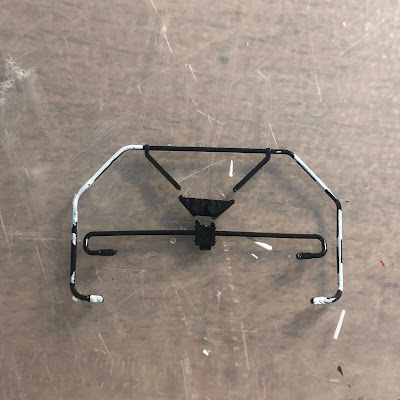 This is the Kato end, showing where I made the cuts.
I then filed the back of the part to eliminate the portion of the railing, and to thin the part. 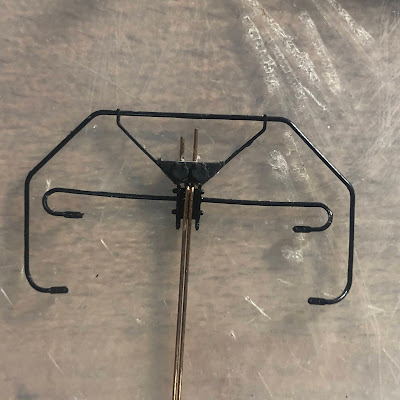 This is the Proto end with the MU receptacles and wires bent and installed. 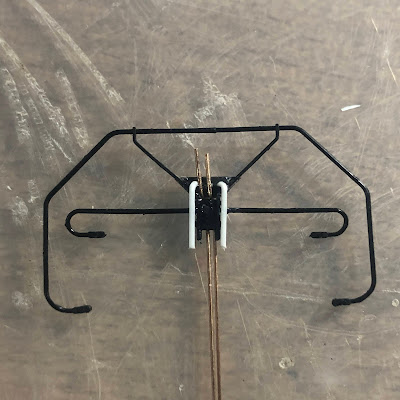 On the back I used .030" styrene rod, and bent the end to represent the MU pipes. In reality, there are more rectangular box-like structures at the top, but I didn't take the time to figure out a way to make those.
The next step was to bend the wires and cut them to go around where the buffer will be, then cut to length. It was trickier than I expected. 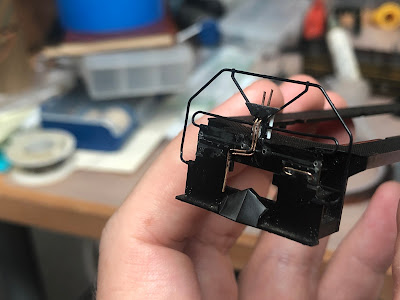 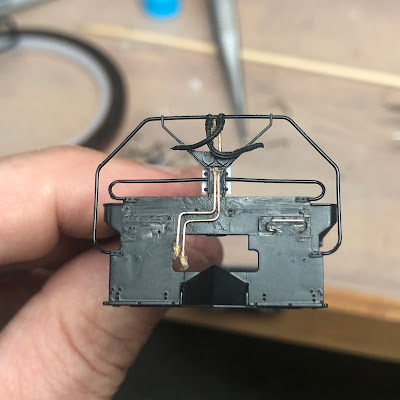 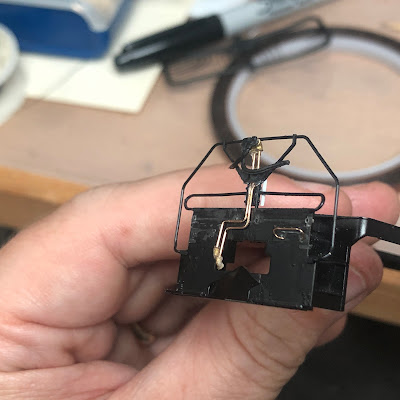 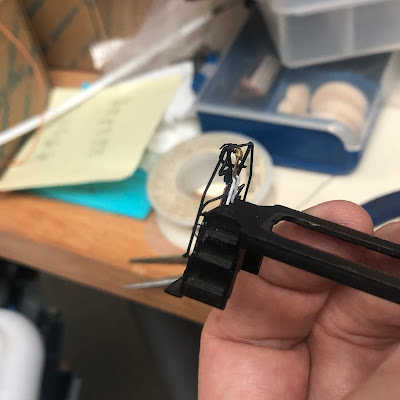 Next up were uncoupling levers. I originally started with the Kato ones, since they have the correct brackets. However, I found it very difficult to measure and drill holes in the precise locations needed for the one-piece part.
So I decided the try the new Cal Scale Coupler Lift Bar Mount Brackets. I already had some Detail Associates Uncoupling Levers. I believe the brackets are from the forthcoming RS-3 models. They are tiny, and have two mounting pins. However, I didn't think I could drill that many holes that accurately, so I cut off one of the mounting pins, and installed it so the mounting pin went into a hole underneath the lever. The bracket fits over the bar and with styrene cement, the second pin isn't necessary. Because they are separate parts, you don't have to be as precise with your drilling. 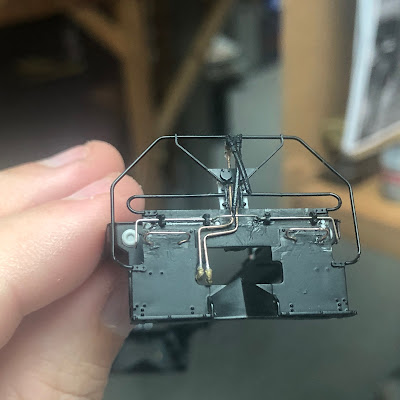 I also added the Cal Scale poling pockets. Since I've seen the air hoses pulled to the side, and also left to hang, I modeled this one with the hoses just hanging.
I will complete the buffer once the walkway is installed on the chassis, since I'll have to build it around the coupler box. There's also a second stiffening piece of strap steel (which looks like where the piping was attached on the back side) above the receptacles. I missed it here, but added them later.
Next up was the brake equalization lever. Thanks to that photo, I was able to see how to best mount the part (it's not really an exact match but it looks good), and also add some additional piping. 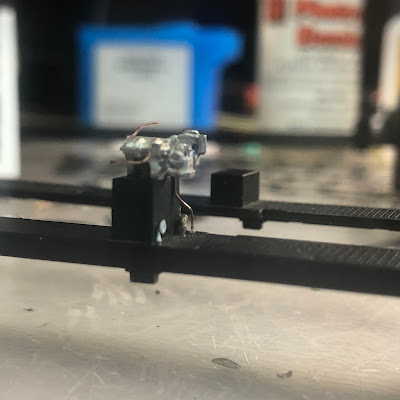 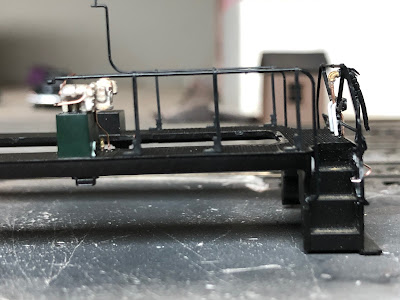 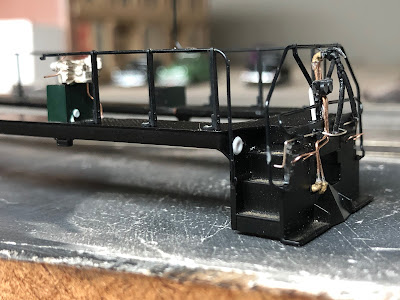 It's .010" wire, except for the short piece beneath the elbow which is .020" wire. I cut a small piece of .030" styrene rod and even a tiny triangle for the bracket next to it. I think the extra piping helps tie it into the model. I also tried to carve out the square-shaped hole on the front of the styrene rod (I couldn't find a part...)
I've also attached the railing so I could paint everything black. I'll brush paint the front and side of the box Hunter Green.
Parts Used in this post:
The model is a Life-Like Proto 1000 (now Walthers Proto) RS-2
Cal Scale (order from Bowser Trains)

2205 Diesel Uncoupling Levers
I had them on-hand, otherwise I would have used Cal Scale 190-514 Coupler Lift Bar

Just the MU receptacles from the RS-2 end railings. The handrail set is out of stock at Kato. Otherwise I would have made the steel strap from styrene and used the Cal Scale 190-618 MU Receptacle Set or Detail Associates 1507 (or several similar ones that come with these parts) 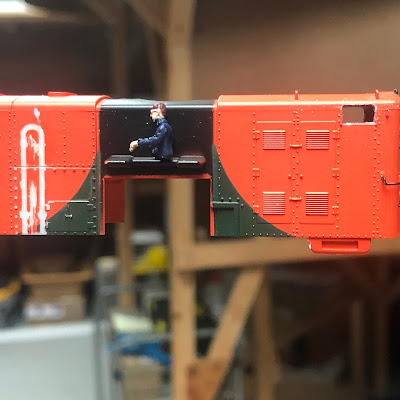