OK, so I had a little time last night and decided to work on the layout a bit... 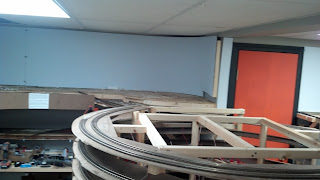 More pictures later!
Posted by Randy at 10:50 AM No comments:

Well, that's the primary railroad activity right now. Other projects are keeping me busy at the moment, but as soon as I complete the big one (moving the laundry upstairs), then Chris and I will get started on additional benchwork.

So that's what the planning is about. I have a pretty good idea of how it will play out. Where the Whiting Street Yard is now will be the block between Whiting and Park Streets. This includes part of the Stanley Rule & Level division of Stanley Works with one siding, Fafnir Bearing (one siding), and the New Britain Gas Light Company, also with one siding. All turnouts will be to the right of the closet door this time so the lead will be visible instead of under the rest of the layout. The door itself will be removed, with the portion above the layout behind the backdrop. It's a small closet and not used for much so I can deal with it being a crawl-in.

I'm particularly excited about the Gas Light Company. Because of where it's situated it's a perfect place to flare out the shelf to allow more space to build the company.

Beyond this will be the swing up section to allow access to the basement, and the track will go into the utility room. The Whiting Street Yard will be rebuilt in a better representation. It will include at least 3 yard tracks, two house tracks, and two bulk tracks. From there it will head into staging.

That should all be pretty straightforward. It's the other major change that will be a bit more interesting. I want to lower the upper deck above the east helix. Clearance will be at the absolute minimum (2 5/8" is what I think I'll settle on). This will allow me to eliminate all but 3' of grade on the mainline for switching purposes, which will help a lot. In addition, the first 3-6' of the helix will also be level, and I'll be adding a (curved) crossover for switching moves. Of course, I'd like to do all of this while pulling up as little track as possible.

It also depends on my ability to reroute the Berlin Line enough to get the clearance there without resorting to a steeper grade.

I'm not sure how soon I'll be able to get to all of this, but I'll probably start whittling away at it a little at a time. I can start removing the track when I get a chance, and remove the upper deck. We can build the new deck for the Berlin Line at that point. Then we'll see what we need to do to reconfigure the helix.

I've ordered some curved turnouts to see if they might work for the crossover. Otherwise I'll have to build it.

So that's it for now, I'll have to take some before, during, and after pictures once I get moving.