The second post covered scratchbuilding side sills and measuring and installing stake pockets. The third post covered how I was handling the rivets with an addendum from my buddy Bill Gill here. The fourth covered some additional prototypes.

I figured I would probably build an MoW flat car at some point, but it wasn't a high priority. But when I learned that the CT Trolley Museum had one of the cars, I decided I really wanted to model it.

Underframe for the NH Car

I went up a couple of times to take some detail photos and measurements and one of the first things I noticed that was quite different from the Tichy model was the underframe so I'll go over how I modeled that in this post. 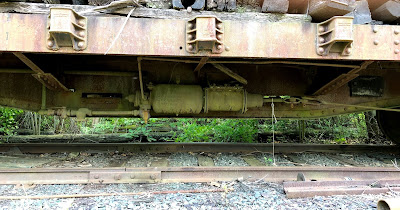 Unlike the Tichy model, the crossbearers go through the center sill, instead of reaching all the way to the bottom of it. It's also not nearly as deep a fishbelly as the kit. I wasn't surprised to see that it still had KC brakes, simply because they were all retired from revenue service prior to K-brakes being outlawed in 1953.

I started looking at options and found that the underframe for the then-new Accurail 36' Double-Sheathed box car was a very good match for this one. 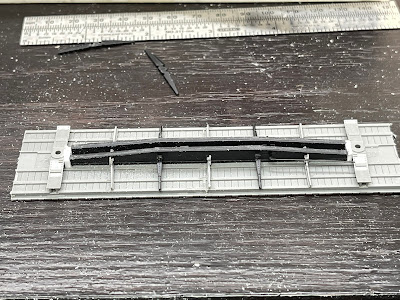 This is what it will look like assembled. This is being test fit on one of the lengthened cars (note the white styrene spacers), because I wanted to assemble it prior to cutting it shorter to fit the NH car. 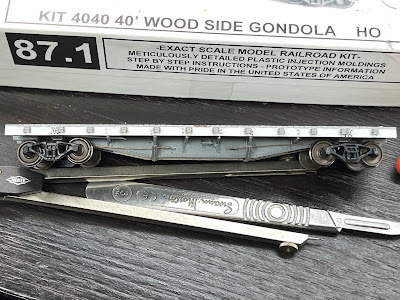 This photo is a view of the Tichy underframe as designed to compare with its deeper center sill and more substantial crossbearers.

While the Accurail center sill and crossbearers looked good, I felt the crossties weren't. They were all tapered instead of straight across, and were very narrow where they met the side sill. So I modified some of the Tichy ones to fit instead. These set the two sills wider apart, so I had to file the slot for the crossbearers to be a little wider as well. 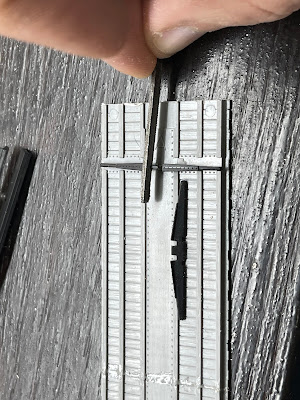 Because the underframe fits on the stringers differently, I had to file the slots in the Accurail crossbearers deeper so everything would fit properly. 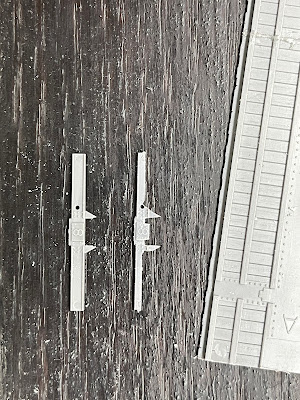 This shows the modifications I made to the Tichy crossties. The one on the left is unmodified. I first cut off the top flange, and then filed it down until it fit properly without showing below the side sills. 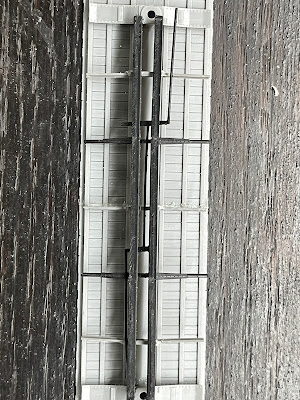 The center sill is too long, so I made sure I cut off equal amounts from each end. I chose to use the Accurail brake system since it looks nice, and the levers and rods are a single piece that's easy to work with. This does mean, however, that the brake cylinder/reservoir sits too close to the B-end of the car. On the NH car this is centered. Moving it would have required cutting a new slot and moving the lever and I didn't think it was worth the effort for this project. Likewise, it wouldn't be that difficult to scratchbuild the underframe entirely to the proper dimensions. I also didn't add a train line.

Getting ahead of myself, but part of the design of the Tichy underframe is there is a weight that fits between the center sills with notches in appropriate places to fit around the other parts. Obviously that wouldn't work here. Instead, this is the first model that I decided to try Liquid Gravity. I believe this product is basically tungsten shot, or something very similar. 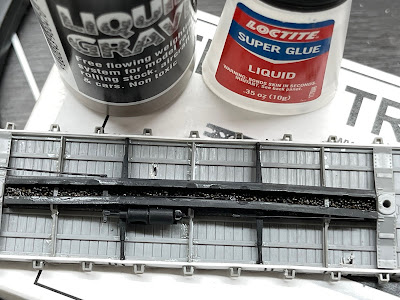 I flooded it with CA and it seems to be holding well. I considered gluing strip styrene as a 'cover' to hold the shot in, but for now it seems fine without it. It weighs 3/4 oz with trucks, wheelsets, and couplers, which is about 1/8 oz more than the kit as designed. Obviously it's very light, but I haven't had any issues running empty Kadee hoppers so we'll see how it does.
Posted by Randy at 9:13 PM