I just got a small stack of NH train orders which provides some insight to the era. All of them at Berlin, CT. 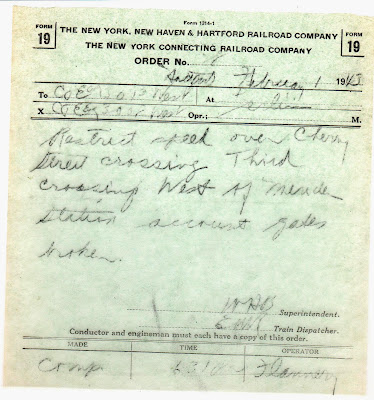 Engine number 3010 is addressed in the first order, presumably they received their own orders as well. Engine 356 is a K-1 mogul, so I doubt it's double-heading with 3010, but it also seems odd that a Mogul would be working at 3.29 AM.
-- 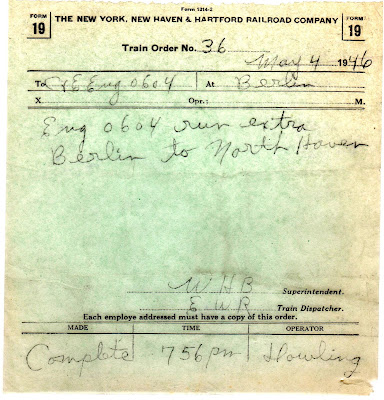 This is also for the YN-x train but by now it's DEY-5 (S-2) 0604. It's nice to see confirmation that these locomotives are handling this job in May of '46. Further proof that if I want to run all steam I would need to go back to 1945.
The Form 19 is now Form 1314-2, the difference being that the the header no longer includes "The New York Connecting Railroad Company"
Superintendent is still WHB, the operator is EWR again.
-- 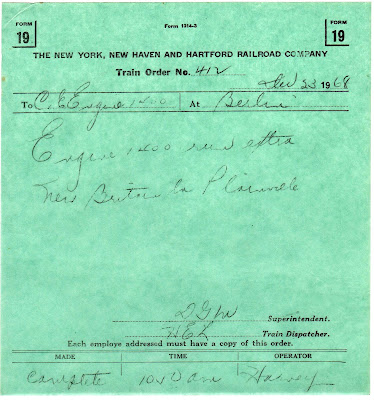 This is a jump of more than 20 years, about a week before the New Haven is folded into the Penn Central. The order numbers are much higher because the Hartford Division had been eliminated in the early '50s, so these are now New Haven Division orders covering a larger territory, so more total orders for the day.
This is a DERS-5 (Alco DL-701) and is most likely still the Holyoke freight.
The Superintendent is now DGW (could be DGM), and the Train Dispatcher is HEL.
-- 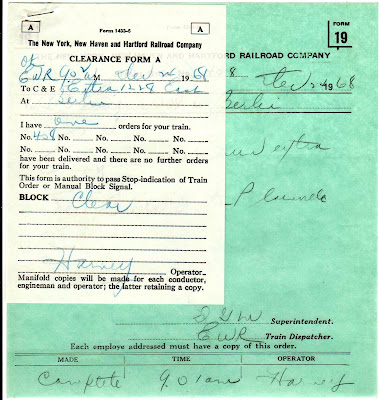 Another DERS-4 (GP-9). Like several of these, it gives orders only as far as Plainville, where they would have received orders to continue towards Westfield. Some of the earlier orders go all the way to Westfield.
The Superintendent for these last two is still DGW, but the Dispatcher is EWR again, covering 26 years.
Posted by Randy at 10:01 PM No comments:

With the Swift and Armour distribution plants in the center of town I know I need meat reefers. But do I need produce reefers? Especially since most sessions won't have Maybrook-Hartford freights where they would be on through trains. And if so, which ones?
I suspect that a lot of the region received produce by truck, serviced by the large Produce Terminal in Hartford. Since refrigerated trucks aren't common in this era, the range of service is probably somewhat limited though. Today that's about 10 miles and a 20-minute drive to East Main St, New Britain where Miner, Read & Tullock and Cohen William, two grocery wholesalers, are located. Both are served by the railroad, though. Would they receive reefers?
I have plenty of evidence that a box car could be loaded for multiple destinations, but I think that's also unlikely in regards to reefers because they would need to be sent to Hartford for re-icing. Since reefers were frequently pre-cooled before icing, opening a car for even an hour for a partial unload is probably not practical. Which means I need to determine whether full reefers would be received in New Britain.
With a population of ~75,000 in my era, combined with the fact that these two industries could also serve neighboring towns, I think the answer is yes. They would receive full carloads of produce reefers.
Which Reefers?
The reason is that the railroads were very selective in loading reefers. While the car service rules prevented roads from loading home road cars in preference to foreign cars, reefers were generally owned by subsidiaries. The New Haven was part owner of FGEX and companies, and their loading rules specified:

"FGE controlled cars (FGEX, BREX, FWDX, WFEX, CX, FHIX, WHIX, BHIX, FOBX) must be used for all refrigerator car loading. Loading of all other private line cars of any type is prohibited except as authorized by car owner, lessee, or this office."

The SP and UP had a similar rule for PFE cars, as did ATSF for SFRD cars.
Since there are no industries in New Britain loading reefers, the cars I'll need will be dependent upon what is being received. My modeling month is November, I can further narrow down the options by looking at commodities are shipping in November.
Will I need that many FGEX cars, or will it lean toward the massive PFE and SFRD fleets?
PFE and SFRD
Looking at the Pacific Fruit Express book, combined with the 1% waybill study, I can identify commodities that would be shipping in November, and whether those were part of the 1% waybill study from AZ, CA, OR, or TX, the states that PFE served.
Another great resource is www.pickyourown.org which has harvest calendars for every State in addition to Canadian Provinces, such as this one for California.
These specific commodities match both those criteria:
In addition, there is a category of Fresh Vegetables for many commodities not called out individually. These could include:
These could all be in PFE reefers, and some may be appropriate for SFRD as well. I'll need to do some more research regarding producers and the towns served by SFRD.
That covers PFE and to some degree SFRD, but what about other produce reefers?
ART, FGEX, MDT, etc.
We can look at the other states that shipped enough produce to CT to be captured in the 1% Waybill Study:
New Mexico would be SFRD territory.
The FGEX consortium serves Florida, Georgia, Mississippi, South Carolina, Tennessee, Virginia, and Washington among other States. So these cars are probably less common than PFE, but about the same, or perhaps a bit more common than SFRD.
New York is served by MDT,  as well as Alabama, Mississipi, and Tennessee via the GM&O.
Canada is served by Canadian National and Canadian Pacific.
The Missouri Pacific and Wabash owned ART, and according to an article by Ed Hawkins they served Southern Texas like the Rio Grande Valley and Uvalde among other areas. So some of the Texas traffic could be in ART reefers.
Obviously, loading isn't 100% to the rules, and even though the 1% waybill study shows what were the most common originating points for such loads, there were undoubtedly there were others.
Roster
It appears that PFE, FGEX and SFRD should be the most common produce reefers in New Britain in November, in that order.
I currently have 10 PFE cars (in several paint schemes since they were changing during the years I'm modeling), all Intermountain.
I have an Intermountain and Athearn SFRD reefer, but the Athearn is a 50-footer. Resin Car Works released a resin kit of other SFRD classes, which replaces the need for earlier versions released by Sunshine, although the RCW cars are currently out of production too.
I also have an NWX (Branchline, now Atlas), and two ART (Intermountain), which should be sufficient, plus the CP 8-hatch reefer that we released at True Line Trains.
But it appears I will need a decent number of FGEX consortium cars, so I'll continue with my plans as detailed in my earlier posts here and here.
Accurate MDT reefers are also hard to find, although I have a Sunshine kit or two to build.
This doesn't cover use of such reefers in ventilation service, or service other than produce, but it forms the foundation of a roster of produce reefers.
Posted by Randy at 12:12 PM No comments:

The June 1945 Along the Line has an article called "We play a part in FREEDOM OF THE PRESS"  which largely covers the movement of newsprint on the New Haven. It's an interesting read, and you can find it in the UCONN collection of Along the Line.
It reports that in 1944 the NH received 8.501 cars of newsprint, with 4,796 of those delivered online.
The newsprint "came from 11 different places in Maine, two in New Hampshire, one in Vermont, one in New Brunswick, and six in Quebec. They were delivered to practically every city in our territory."
In my case, the New Britain Herald is a daily newspaper that would receive newsprint via the bulk tracks, or possibly the freight house, since they aren't served directly by rail. I'm always looking to identify loads to deliver to the bulk tracks, so this is a great place to start.
So poking around online I found a 1950 Congressional Hearing regarding antitrust investigations into the newsprint and paper industries. The copy at Hathitrust.org is more complete, with the appendices. Of course, this is fascinating, but a very long read, and it's tough to find the sort of information I'm looking for. But there was some testimony from John A. Guthrie who apparently wrote a book on the subject prior to being called for this hearing. It's a little pricy on Amazon for my purposes...
His testimony indicated that by 1949 the number of mills in North America are:
Canada

He also describes the general movement of newsprint:
61% of Canadian newsprint moved by rail, 37% by water, 2% by rail and water, although water traffic is only during summer (Great Lakes and ocean).
The largest shipments by water from American mills is Oregon and Washington.
Newsprint from Quebec, New Brunswick, Nova Scotia, Newfoundland and Maine is shipped to New England and Middle and South Atlantic States, and some to the Southern States.
Newsprint from Washington, Oregon, and British Columbia is shipped to Mountain and Pacific States.
Newsprint from Alabama and Texas is shipped to Southern States and Mexico.
Some of the most interesting information is that many of the mills are majority owned by certain publishers.
Most of the US mills are majority owned by a publisher or group of publishers and provides some very useful information for populating waybills.
This inquiry may have been brought about in part due to a newsprint shortage following WWII as described in this paper and it goes into more detail about some of the arrangements with various mills and publishers.
--
Looking at the average number of cars to CT from the 1% waybill study shows that an average of just a bit more than 3,000 cars were delivered annually 1950-54. 80% of those from Canada, and 20% from Maine.
--
I found another book of House Records, that includes a great table of newsprint production in 1950, though, and combined with John's testimony, can narrow down the options a bit more.
By my era, starting only two years after the Along the Line article, there are no mills in New Hampshire or Vermont.
The largest, and only mill in Maine not owned by a publishing company, is the Great Northern Paper Co, with mills in Millinocket and East Millinocket, both served by the Bangor & Aroostook.
For Canadian mills, the Canadian International Paper Co in Quebec is the largest, shipping out of six mills
The second largest is the New Brunswick International Paper Co, in Dalhousie New Brunswick on the CN.
From the largest to smallest producers, the others that are not are not affiliated with a publisher are:
RS - Roberville Saguenay Railway, a short line owned at this time by Alcan, an aluminum manufacturing company. It served local industries, including the Price Bros mills, and had a connection with the CN.
QRL&P - Quebec Railway Light & Power, a short line east of Quebec, taken over by CN in 1951.
It's unclear what railroad(s) serve some of the mills based on what little information I have.
--
This gives me all I'll need to generate waybills for carloads of newsprint and I learned a lot in the process too! Time to get back to some modeling - I have been working on a number of projects and just need to make some time to write the posts. More soon!
Posted by Randy at 3:33 PM 1 comment: