After the oils, I wanted to try to do a layer of soot and dust using the airbrush. Having never done this, I decided to start with tinting a clear coat with a little black. The idea being that not only will I add the layer of grunge that I want, but it will also seal the oils. 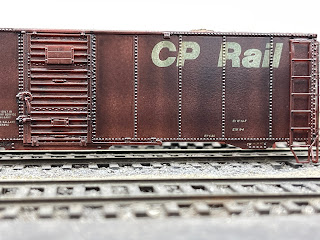 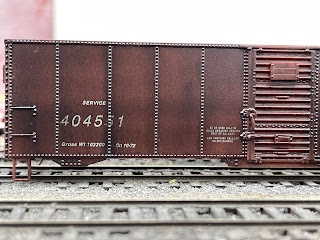 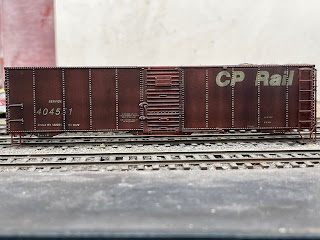 It took some work, and I did test it on a couple of spare models first. It was quite challenging to not get stripes. Since the coverage is light, when you do the next pass, the overlap is darker than the areas that don't overlap. It also basically obliterated the oil weathering I had done, probably being too heavy. It's still there, but not nearly as prominent as before.

I also think that this had a slightly different effect than I was hoping, although subtle. It almost looks too even, to my eye. Overall I think it will be fine, but needs something else to make it less uniform. But I either need a lot more practice, or to find a different approach to get that overall layer of soot and dust I'm looking for.

With the oils, I was ready to get started on the actual model immediately. I'm glad I didn't as I work through further processes. I think I need to weather another scrap model (or a few) with oils for practice, but also so I can compare them side-by-side as I try other approaches layer by layer.

This is a new paint, too. Dale and I stopped at Time Machine because I wanted to get some Vallejo Model Air black. They didn't have any, but they had a new rack with Mission Models paints, which neither of us had tried. Since we were going back to work on the layout, and Dale was going to show me some airbrushing tips, it seemed like a good opportunity to try them. 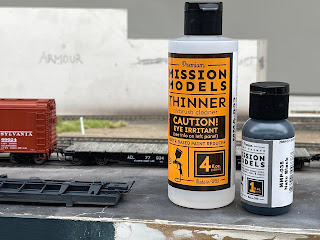 They were thicker than we expected, but airbrushed very well, with or without thinning. I think we both really liked how they handled. He did another coat on the X31a underframe and the color is good, not jet black, but much darker than the Vallejo color that I thought was a match for Grimy Black.
They were out of the gray primer, but I'm quite interested in trying it. It's a two-part mix and must be "activated" with up to 1/4 of their primer. I guess it's supposed to help it adhere better. They also recommend spraying at quite a low PSI - 10-15 PSI. So far I'm quite impressed. 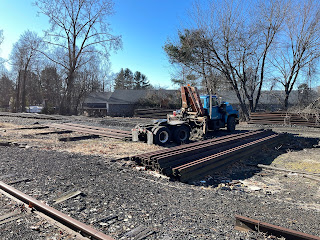 Getting ready to move a pile of rail from here to there at Depot St. I walked about 3 miles around the circumference of a 20’ radius circle in an afternoon.

What I also found interesting is the ratio we were moving. It was rolled in 1915 and 1922 for the NH, 107 lb rail taken out of the Canal Line near the Massachusetts border.

What’s the length of a piece of rail? The conventional knowledge is 39-feet, so it would fit in 40-foot gondolas. While that is true, 40-foot gondolas weren’t always the standard length pre-depression. In addition the surveying, real estate, and railroad industries use some standard systems of measurement.

These rails are two rods long, or 33-feet long, a rod being 16.5-feet. Of course, that worked well since it fit in 36-foot cars. The NH didn’t have 40’ gondolas (or flat cars) until the 58000-series of gondolas were built in 1929. (For more on those, including a diagram, see this post.) So they may have continued to receive 33-foot rail until those cars were built.

So for those modeling earlier eras (pre-depression to a large degree), it may be more appropriate to put those joint bars every 33 feet instead of 39 feet. This is appropriate on some lines even today, large portions of the CNZR is CNE/NH rail from pre-1926, the oldest I think from 1896-7. The Highland Line is still largely 107 lb NH rail, so I’ll have to go take a closer look at when it was produced. I suspect that I’ll need to go with that measurement on the layout.

I'm making some modifications to one of the Rapido X31a box cars that recently arrived. Since I'm going through that process, I want to complete the car, weathering and all. To that end, I've grabbed a spare body (I removed the roof for another project) to attempt to develop a basic process.
Because the X31a cars were built 1934-6 and still in their delivery scheme, I'm using several of Jack Delano's excellent photos as inspiration. I believe these photos are c1942. I also found that there's a book of his railroad pictures, which I immediately added to my Christmas list.
The late '40s/early '50s is still the steam era, so the cars will still weather in a similar manner, so I think these are a good reference for any car that is still in the same paint scheme in my era. 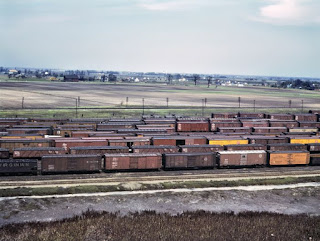 While all of these are useful, I'm focusing on the Pennsy cars, like the X29 in the front. 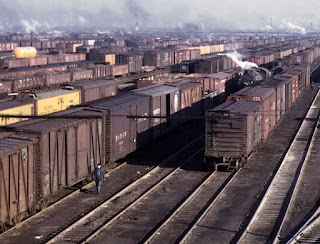 There are two X31a box cars in this photo. 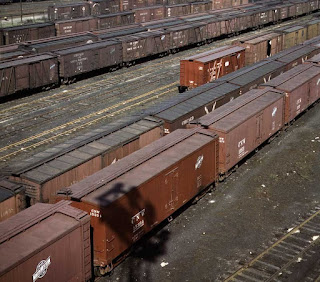 Base Weathering with Oil Paints

Using this as a guideline, I started with painting along the rivets and other raised elements (including the door) with burnt umber oil paint. I really like working with this medium, and expect that it will form the base of most of my weathering. These photos show the process of working the oils. 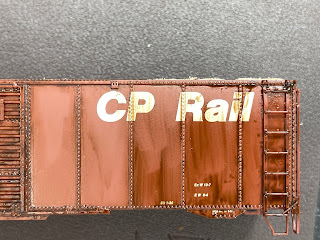 You can apply it fairly heavily, since it's easy to remove. 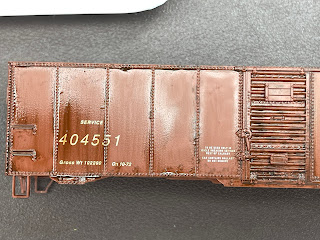 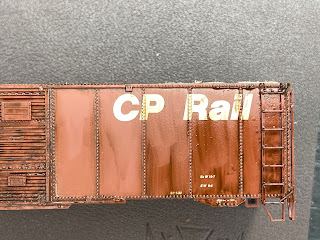 After drying, I was seeing more streaks than I wanted. 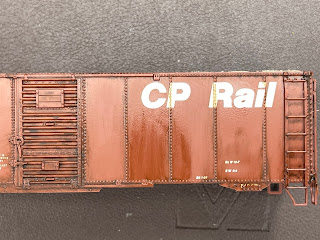 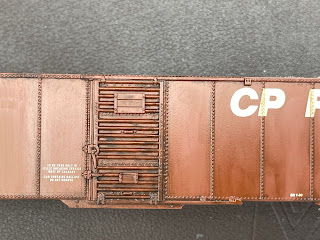 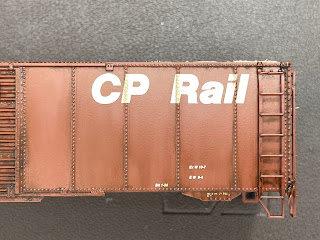 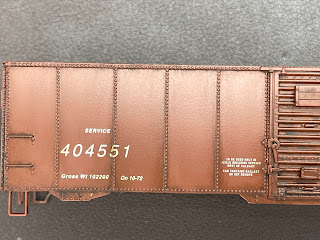 I found that removing the excess on the panels with a paper towel was more consistent than a brush. 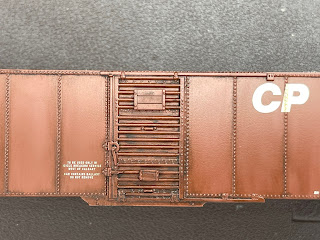 Here's a few photos on the layout after it had dried. 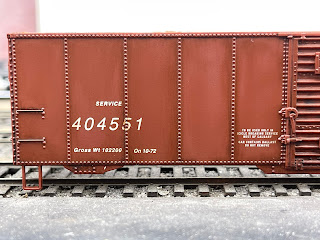 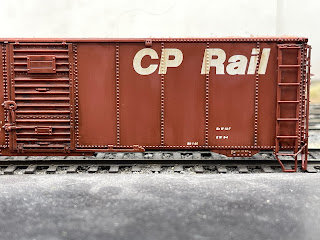 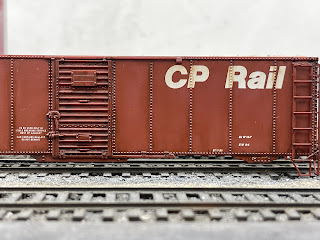 I tried a number of approaches, all of which worked pretty well. Wetting with (odorless) mineral spirits first, or not. Applying as a wash vs. a thicker application and taking away/thinning with a brush and mineral spirits, and similar variations.
I did find that I preferred upstrokes (from the bottom of the car) with fairly thick paint to apply the color, and down strokes with a damp brush to remove it. This was basically a brush that had been cleaned with mineral spirits and then dried with a paper towel.
I wanted there to be more dirt under the rivets than on top. I used a very fine brush to work on other fine details to ensure they received as much dirt as I wanted. Thinned paint, but not to the point of a wash, on a very fine brush worked well for along the panel lines.
A generous wash in large depressions, such as the door corrugations, did a nice job of providing a random application or dirt. Once dry I used a brush or paper towel to remove excess on the corrugations themselves, particularly along the top.
I wanted a very thin coating to dull the bright white of the lettering.
So far I'm quite happy with the approach, and I can see how it would be easy to do a number of cars at once time.
Posted by Randy at 2:30 PM No comments:

So here it is, a week, a week and a half, ummm, nearly two weeks since my last post. After being very consistent all year, my busy schedule has caught up with me. In this case it's been extra hours at all of my work/business endeavors, plus it was my birthday, etc.

That's not to say that I haven't been able to do anything.

After the last post, I was able to finish soldering all of the feeders to the rail at Whiting St. Yard that evening. I have also connected enough under the layout that it's even operating!

AML Modeling buddy Mark Stafford pointed me in the direction of Krone connectors. These are a type of punch block (well, several types) where you can terminate dozens of wires that are then connected to an output wire. In the US we have similar punchdown blocks for phone, and sometimes network systems. These look like a great idea, but getting it done now was more important, so I went ahead with my original plan of wire nuts and T-Tap Connectors.

As is typical, a few models have crossed the desk. I started working on a Wright Track (ex-Smoky Mountain Model Works, potentially available from Southbound Model Works & Decal Co). This has turned out to be quite a challenge, which I'll explain when I get to actually building it. I also cleaned up all the parts for a Resin Car Works DSS&A box car. This will be a fun (and quick) build, just not sure when.

Work at CNZR has been great, naturally. I take a lot of photos like these: 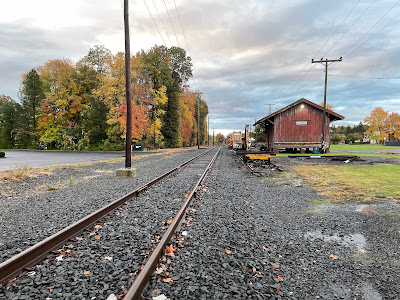 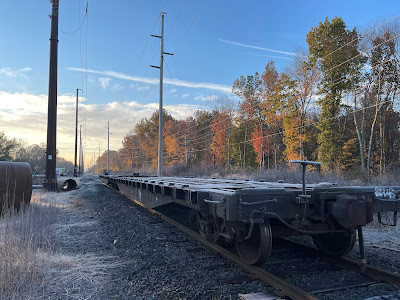 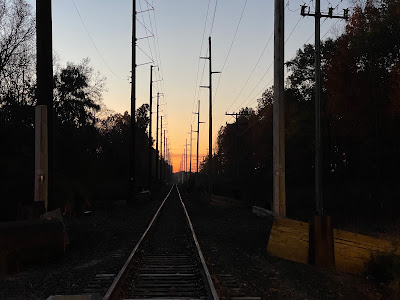 Morning (prior to daylight savings) at Tobey St.
There's also a lot of wildlife, like this deer right near the Copaco cattle chute. 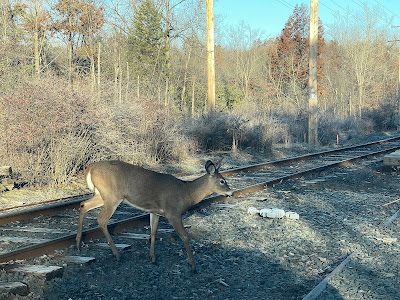 I've seen bobcats, foxes, turkeys, a bear, lots of snakes and frogs, a very large praying mantis, and others I'm probably forgetting.
For fun I sent my daughter a few pictures like these: 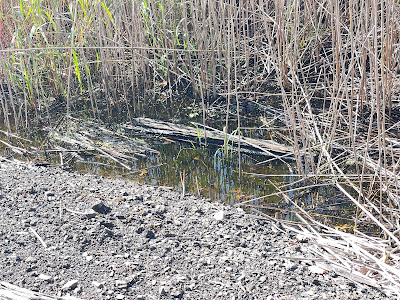 There's a frog in this photo. 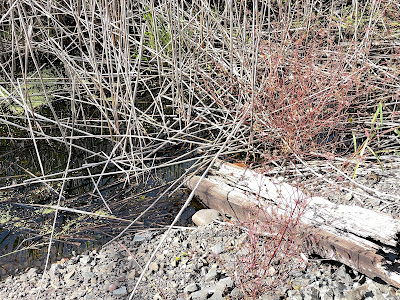 There are two frogs in this one.
But I'm not sure how much of this I want to keep including things like these on a blog about modeling and my layout. So I've decided to start a group on Facebook where I can post things like this, and also be able to communicate more directly. It's also a place where I can provide more informal updates and previews for what will often end up on the blog.
You can let me know in the comments what you think, and of course on the Facebook Group.
--
I plan on trying to post to this blog weekly (instead of the three times/week I've been doing for about the last year). I have several posts in progress, but there are a few other priorities right now:
1. Complete the update of the website (I have to switch over by the end of the year).
2. Finish a clinic for the December Hindsight 20/20 meet.
3. Build a website for a friend's model train business - I'm very excited about this one, but can't say anything else yet...
In addition, I'll have work, business, and family things to manage, with Thanksgiving and Christmas right around the corner.
Posts I'm working on:
1. A tour of my buddy Dale's layout.
2. Modifications to a couple of Rapido's X31a models.
3. (Semi) handlaid switches with CVMW tie strips and Proto 87 Stores parts, among others (I have to build two), and Fast Tracks Diamond Line crossing.
4. More work on the Proto S-1, Atlas S-2, Bachmann/W&R 44-tonners, and Crown Custom I-2 locomotives.
5. Upgrading NE-5 and NE-6 cabooses.
--
So that's where things stand today. It's really adding 40+ additional hours working at the railroad that has restricted the amount of time I have to work on the layout/blog for now. But it's an adjustment, and it's not uncommon for me to get more accomplished when I'm very busy compared to when I have more free time.
Posted by Randy at 9:58 PM No comments: