Wow. Two posts in one night. Here are some photos from the Second Official Valley Line Ops Session. Due to some technical difficulties I couldn't get these posted until now.

I wasn't running trains this time. I helped get things started, and experimented with a few photos before helping out upstairs for the Photo Library Night that was happening at the same time. 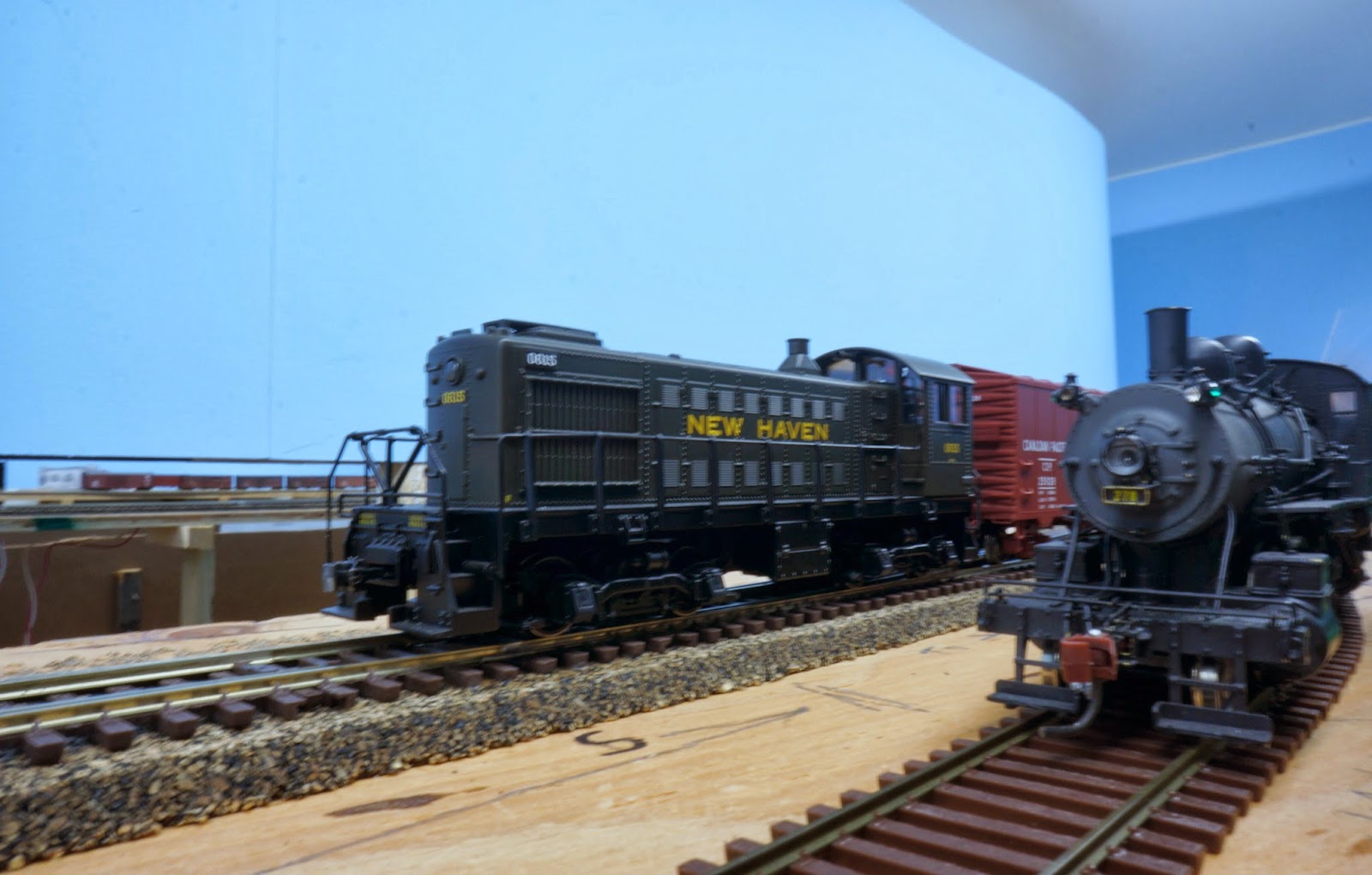 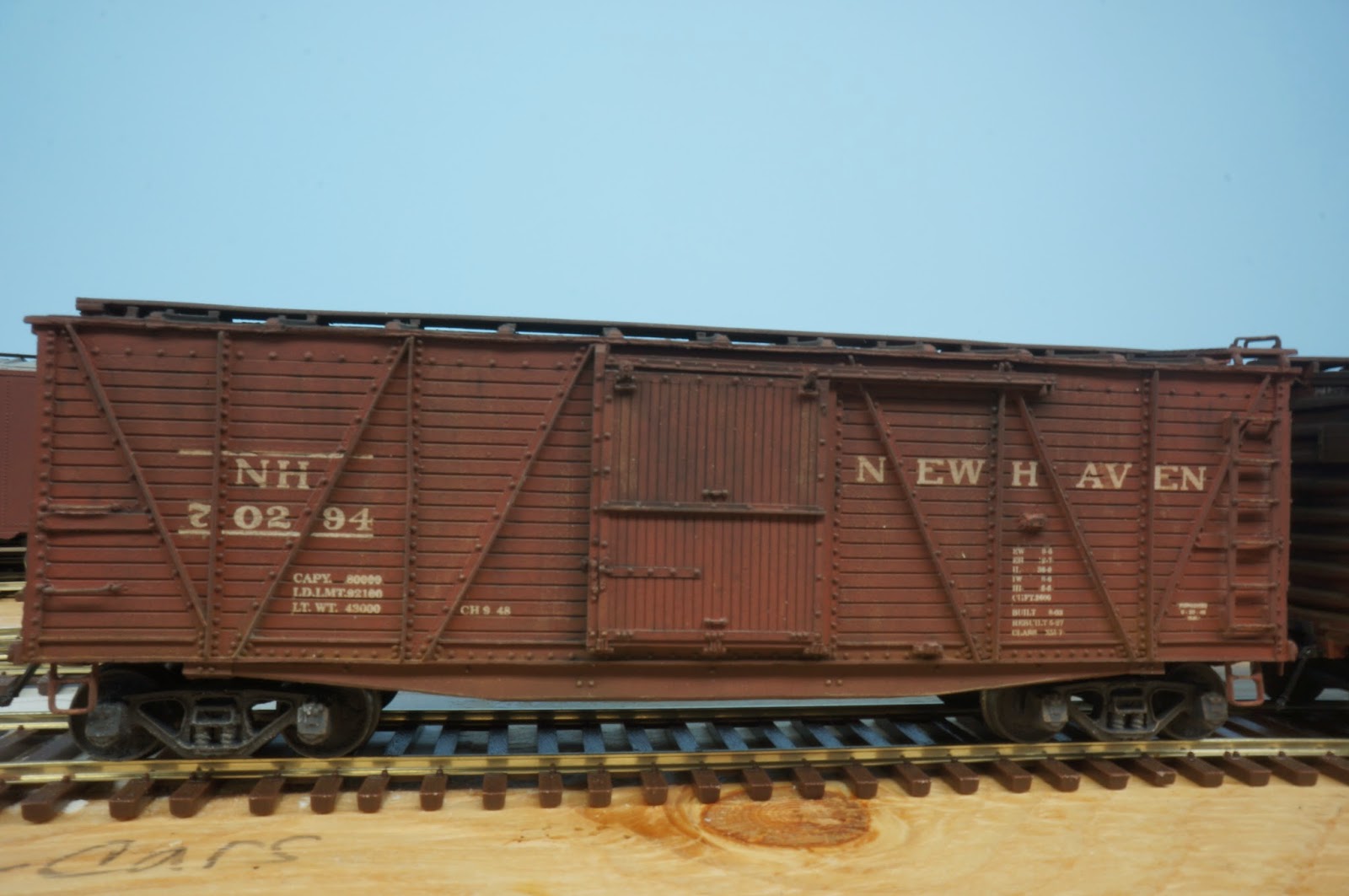 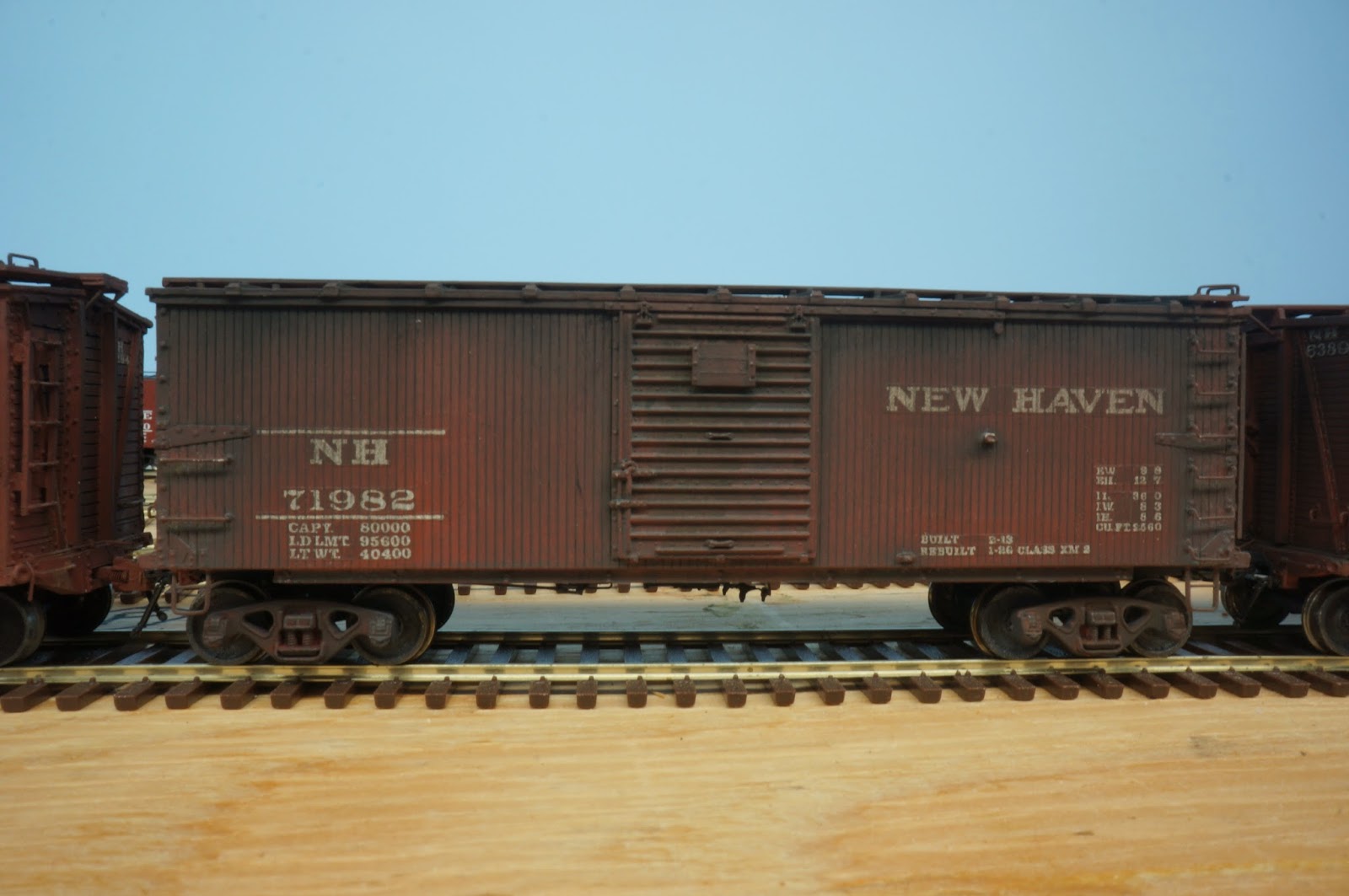 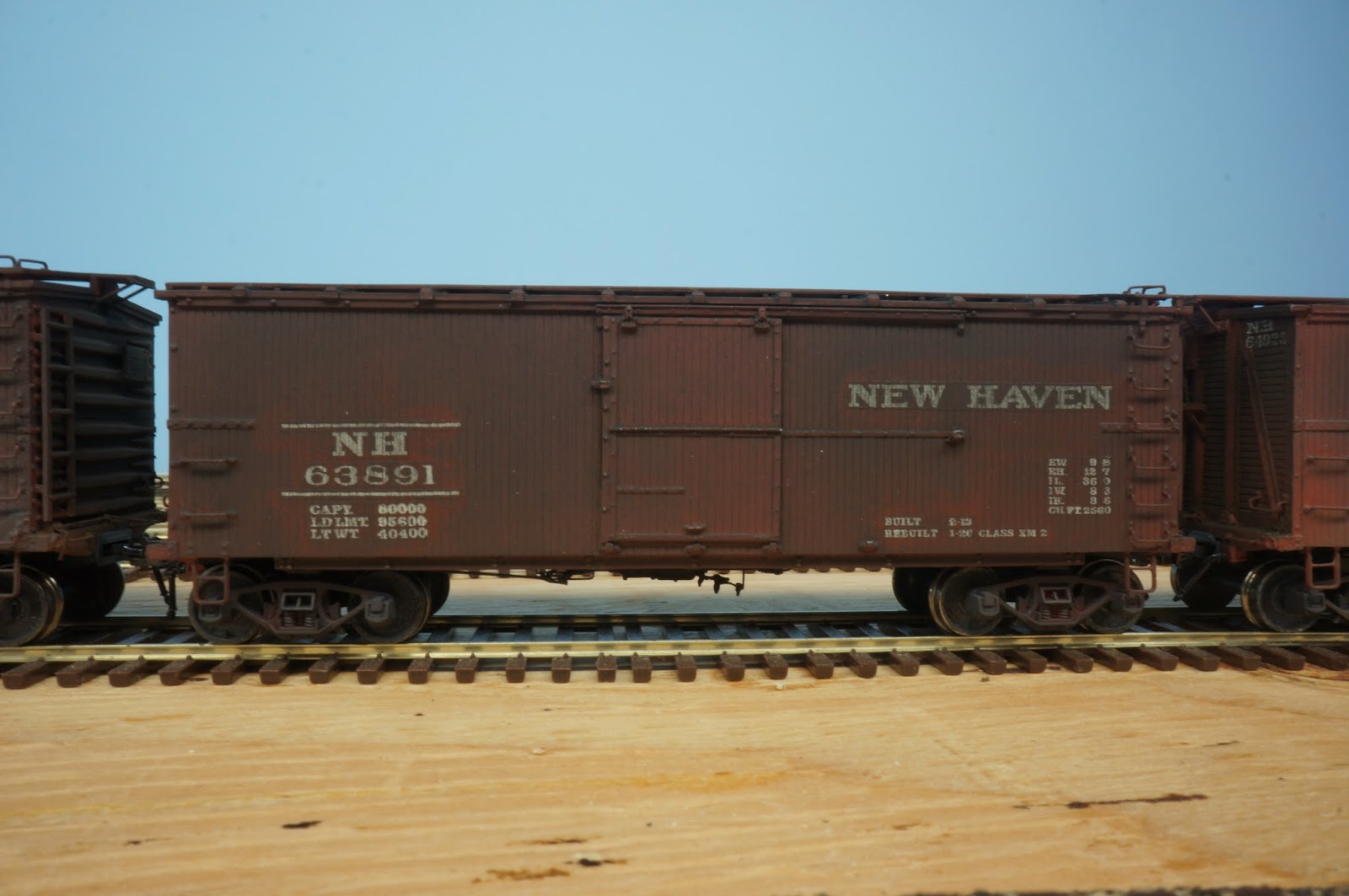 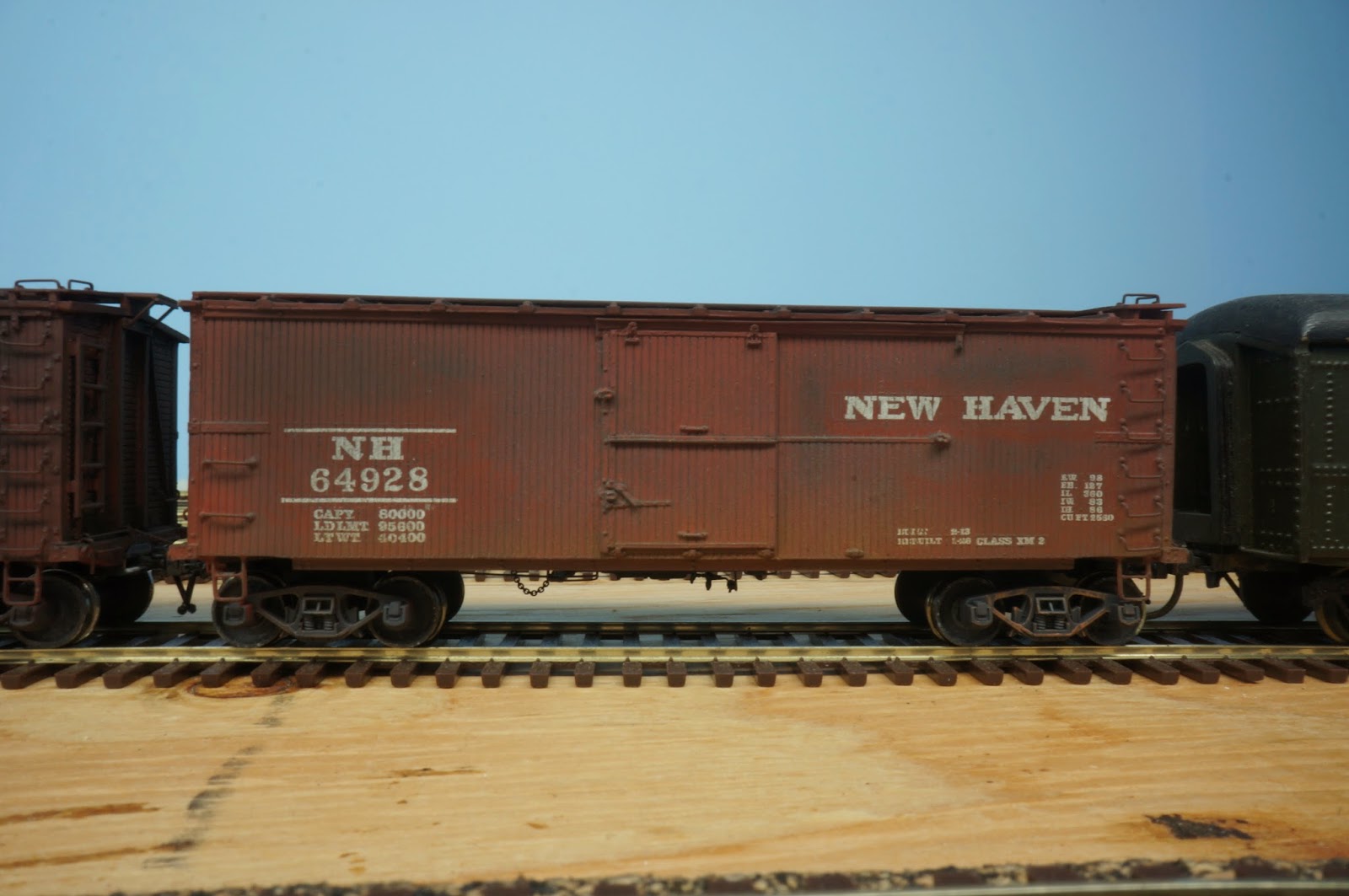 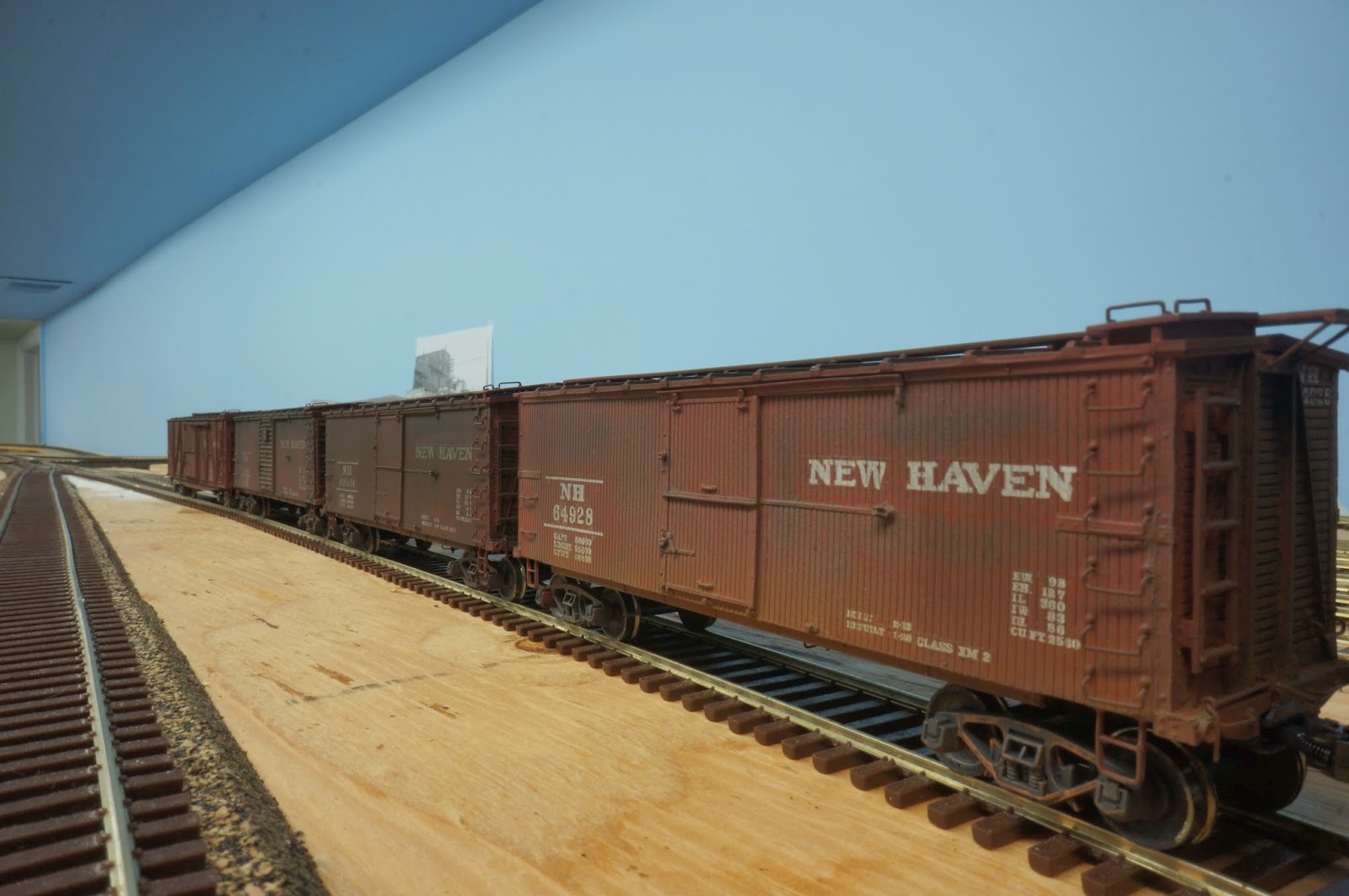 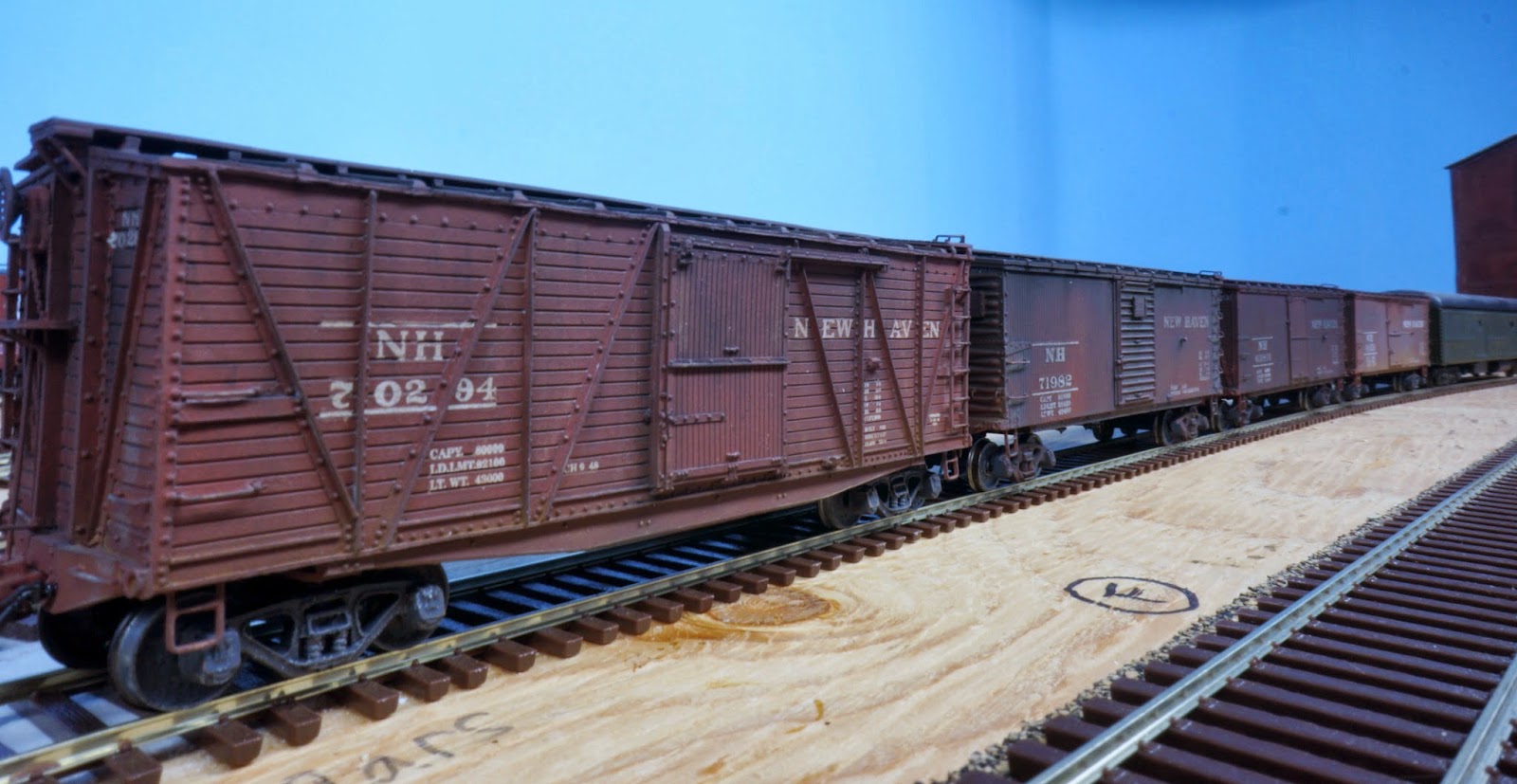 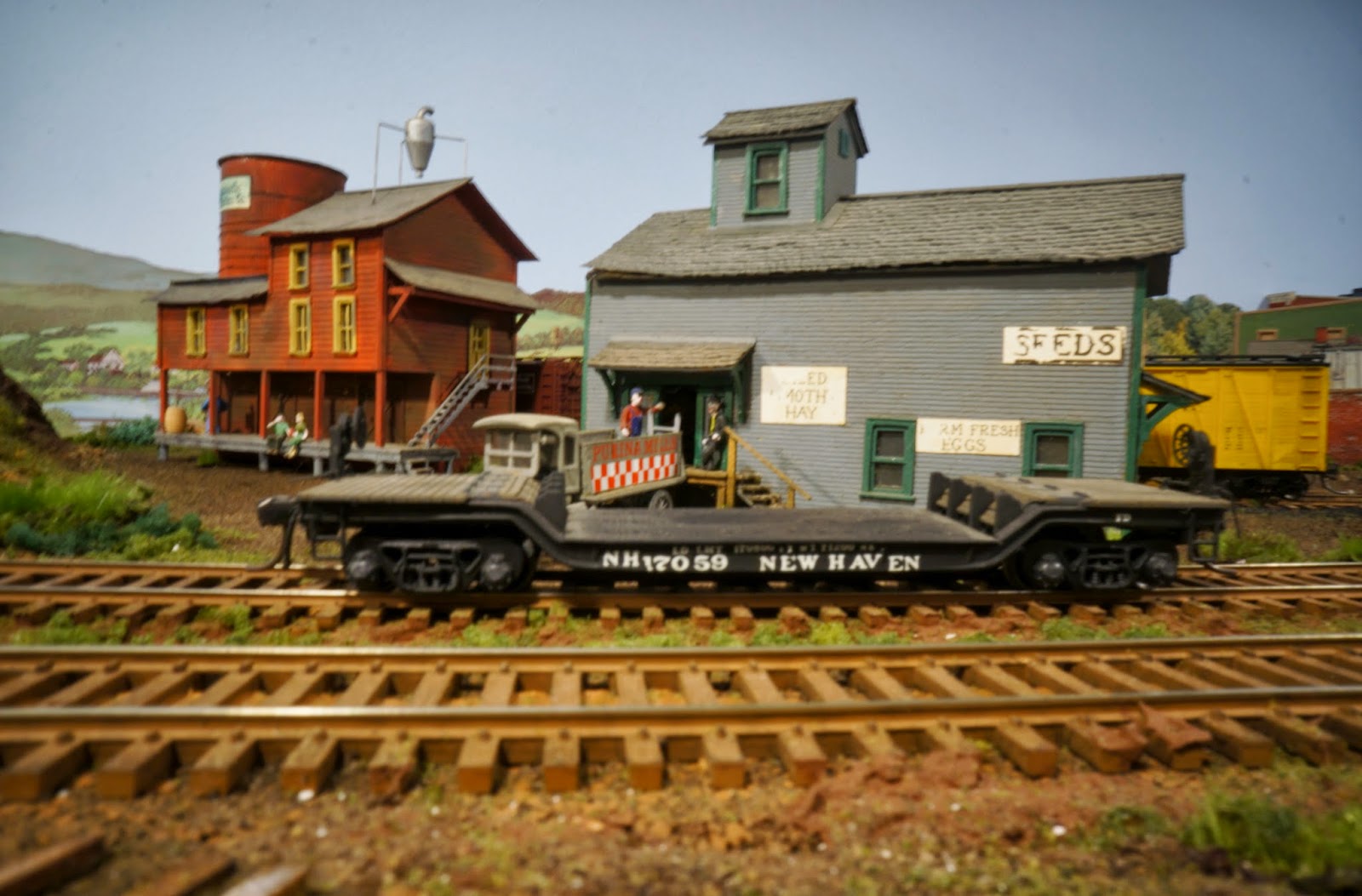 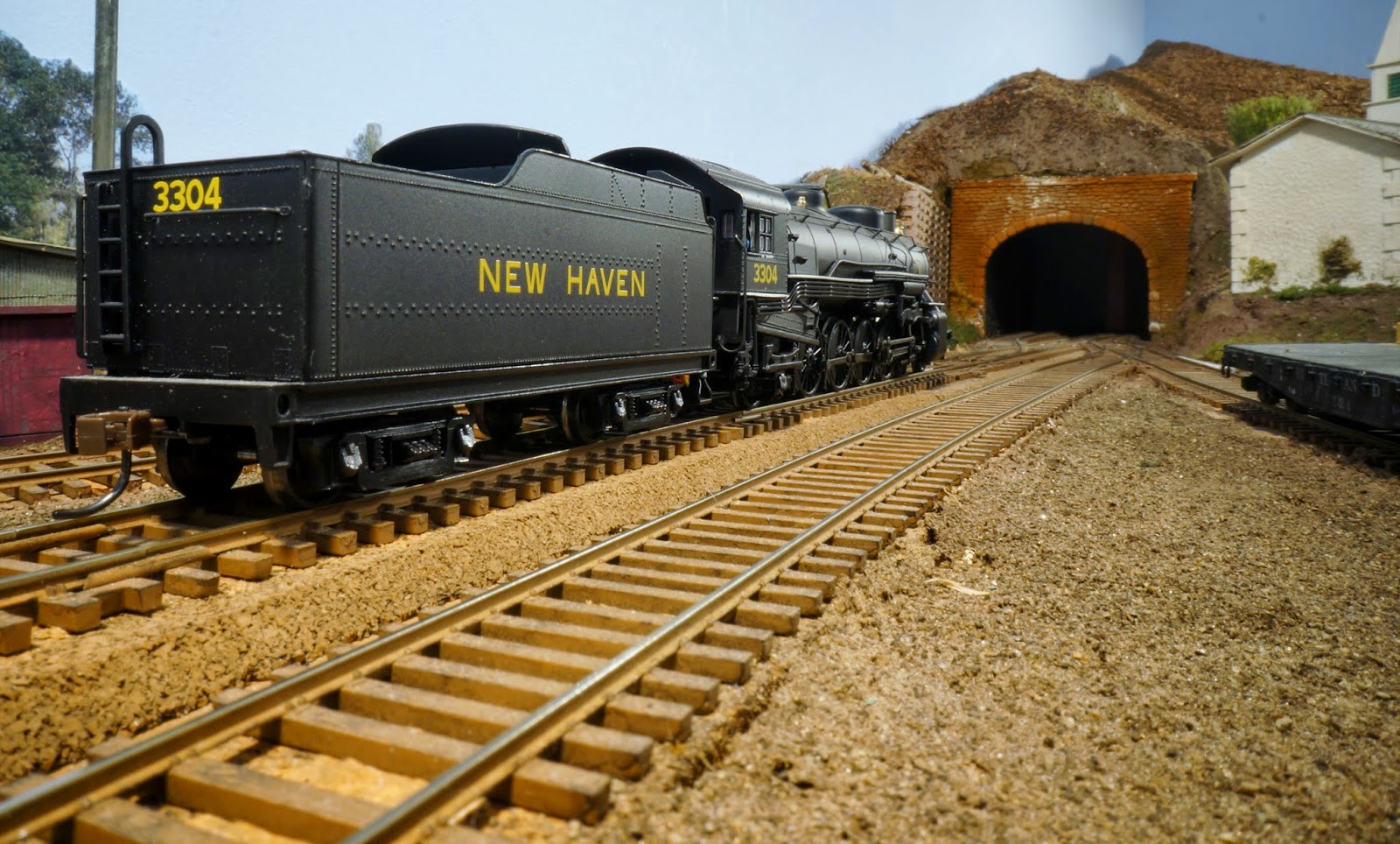 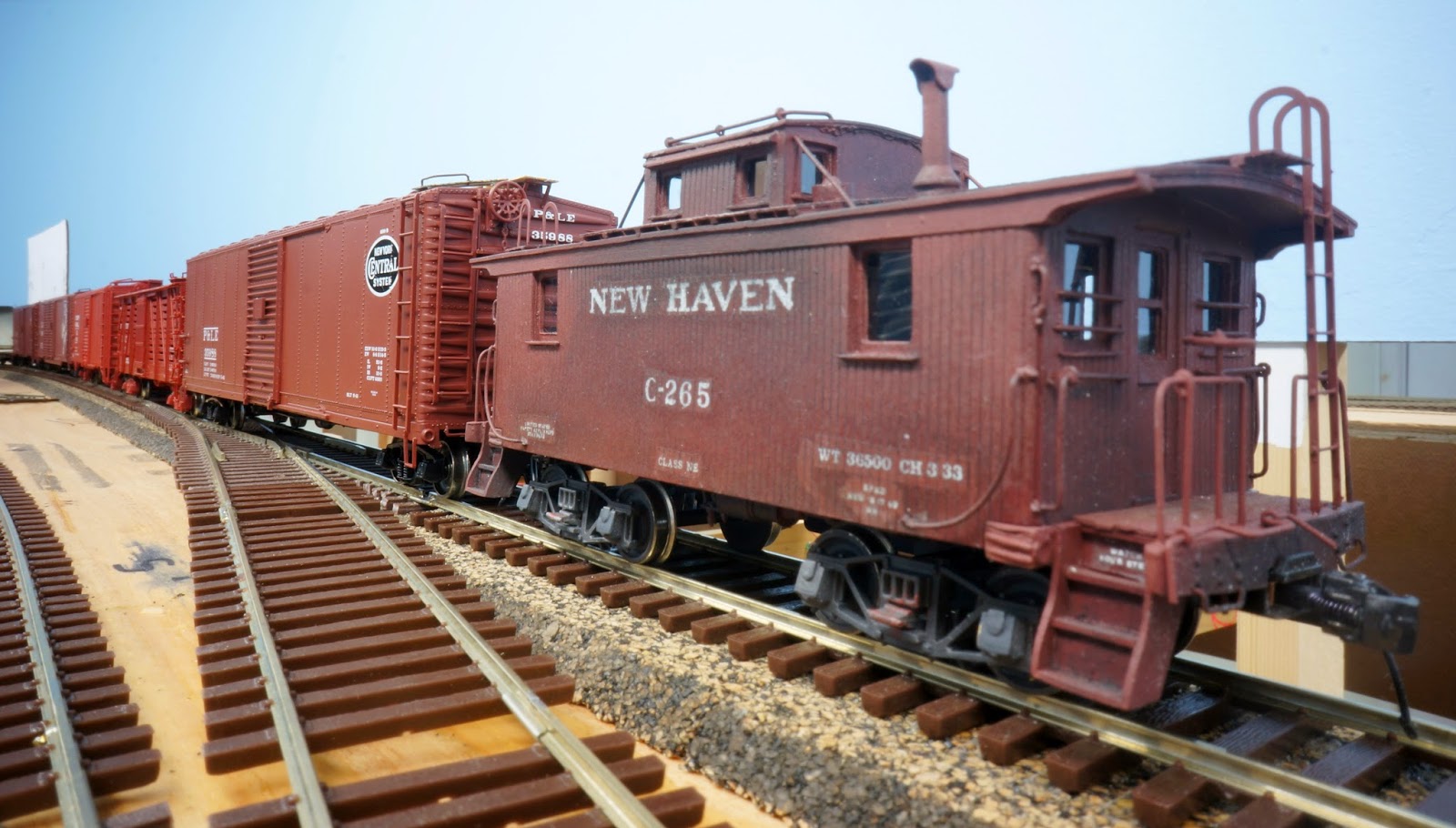 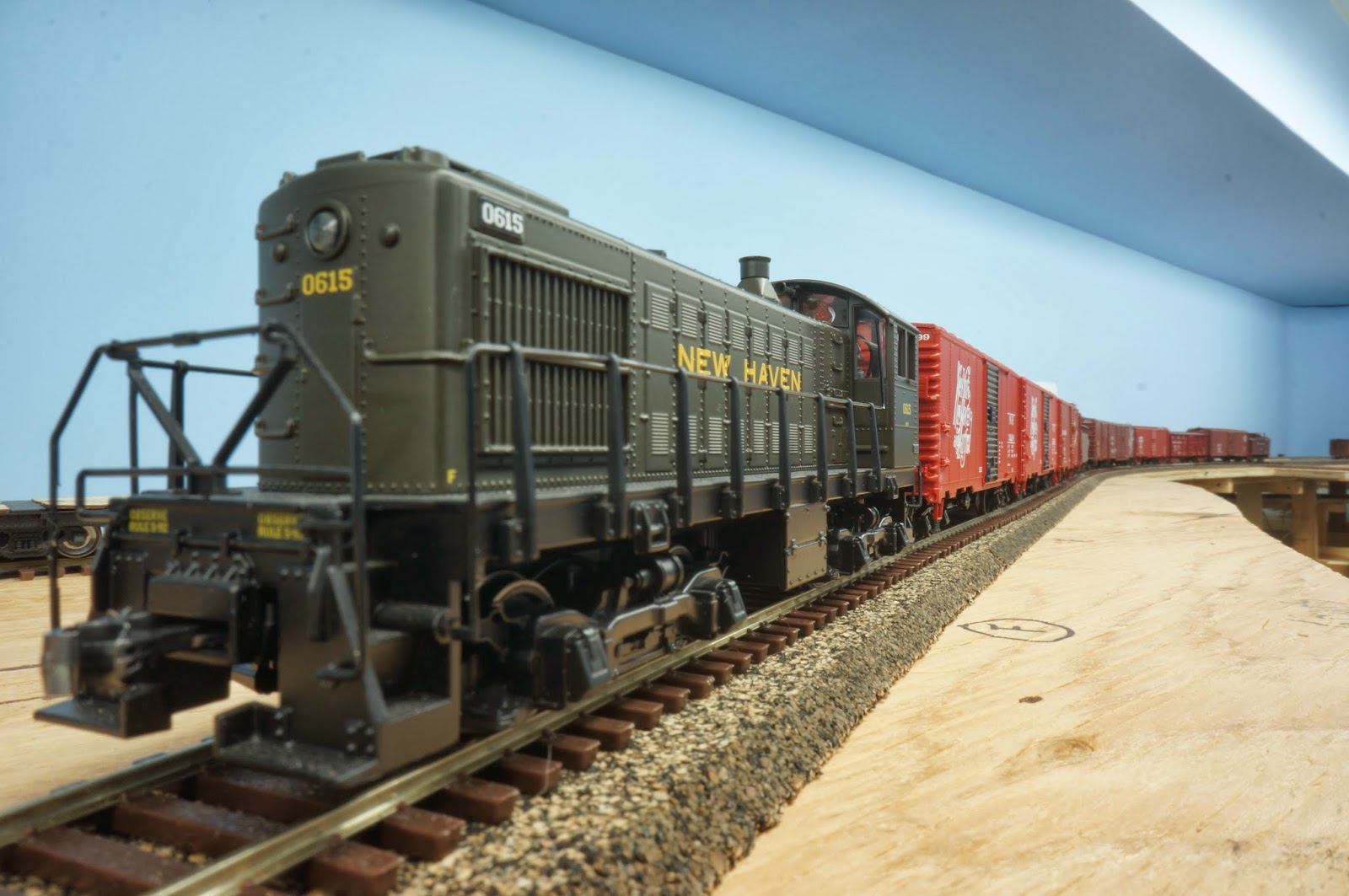 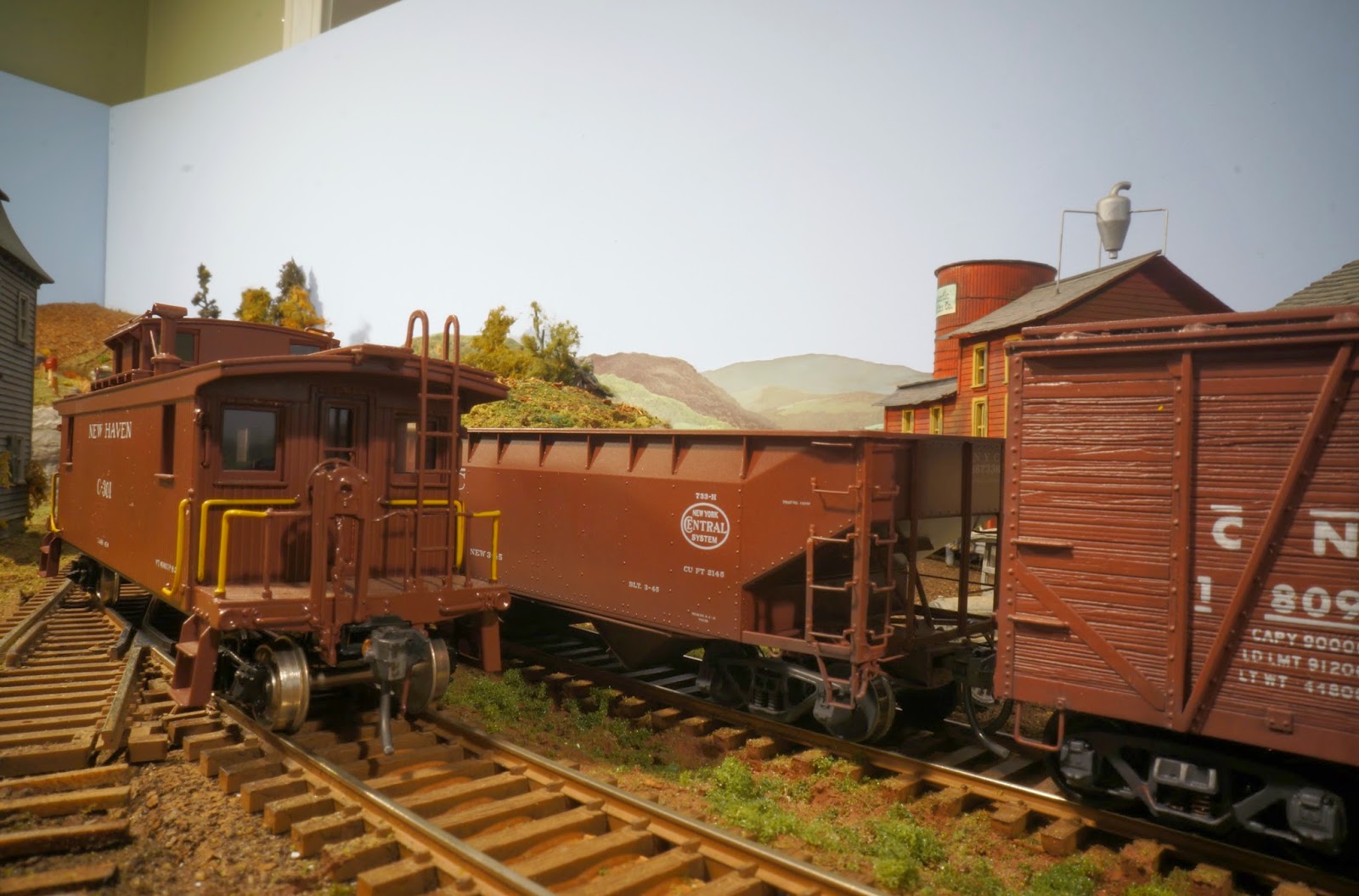 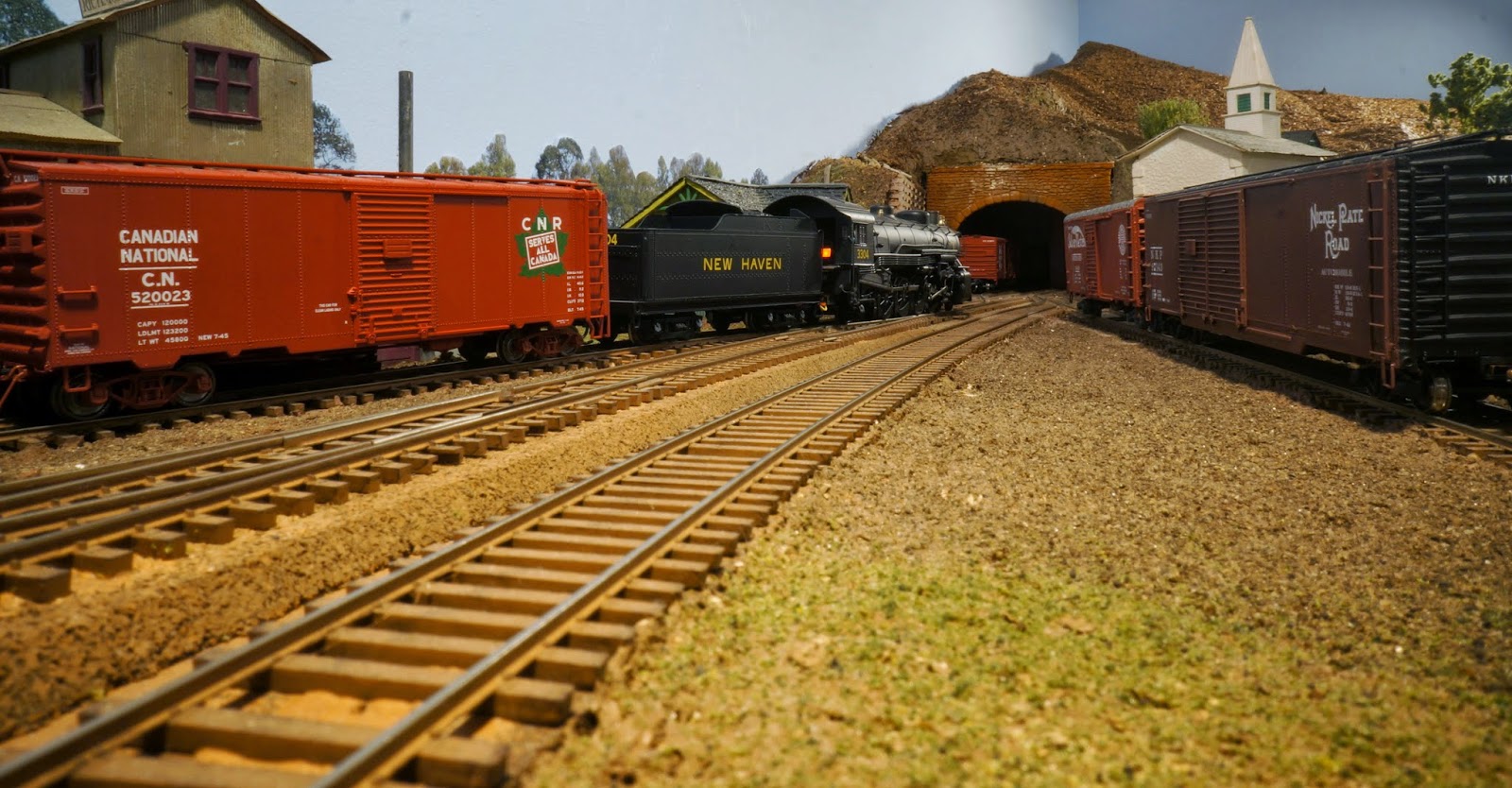 Chris, Pieter, John, Tom, and new buddy Jim Schweitzer drove down to NJ for an ops session at Dave's place with a much larger crew. Dave's modeling Manhattan in 1947 and it's a really unique layout.

Or really, layouts. I'll give a brief description, but there's a ton more information about NYC railroads at Industrial and Offline Terminal Railroads of Brooklyn, Queens, Staten Island, Bronx and Manhattan.

The Erie and Lehigh Valley Yards are covered on the site in detail, the High Line and NYC Yard are not.

Chris, Craig Bisgeier and I were operating the NYC West 33rd Street Yard. It basically operates as an independent layout of its own, with freights terminating in the yard. All of the freight is handled at several industries right around the yard, a freight house and REA terminal. We usually had two switchers doing the work of breaking apart and building the freights. It's a cool operating scheme with waybills, cars sit for a minimum time as listed on the waybill and managed by the fast clock. There's also a cleanout track and cars are left  a minimum amount of time based on an egg timer. 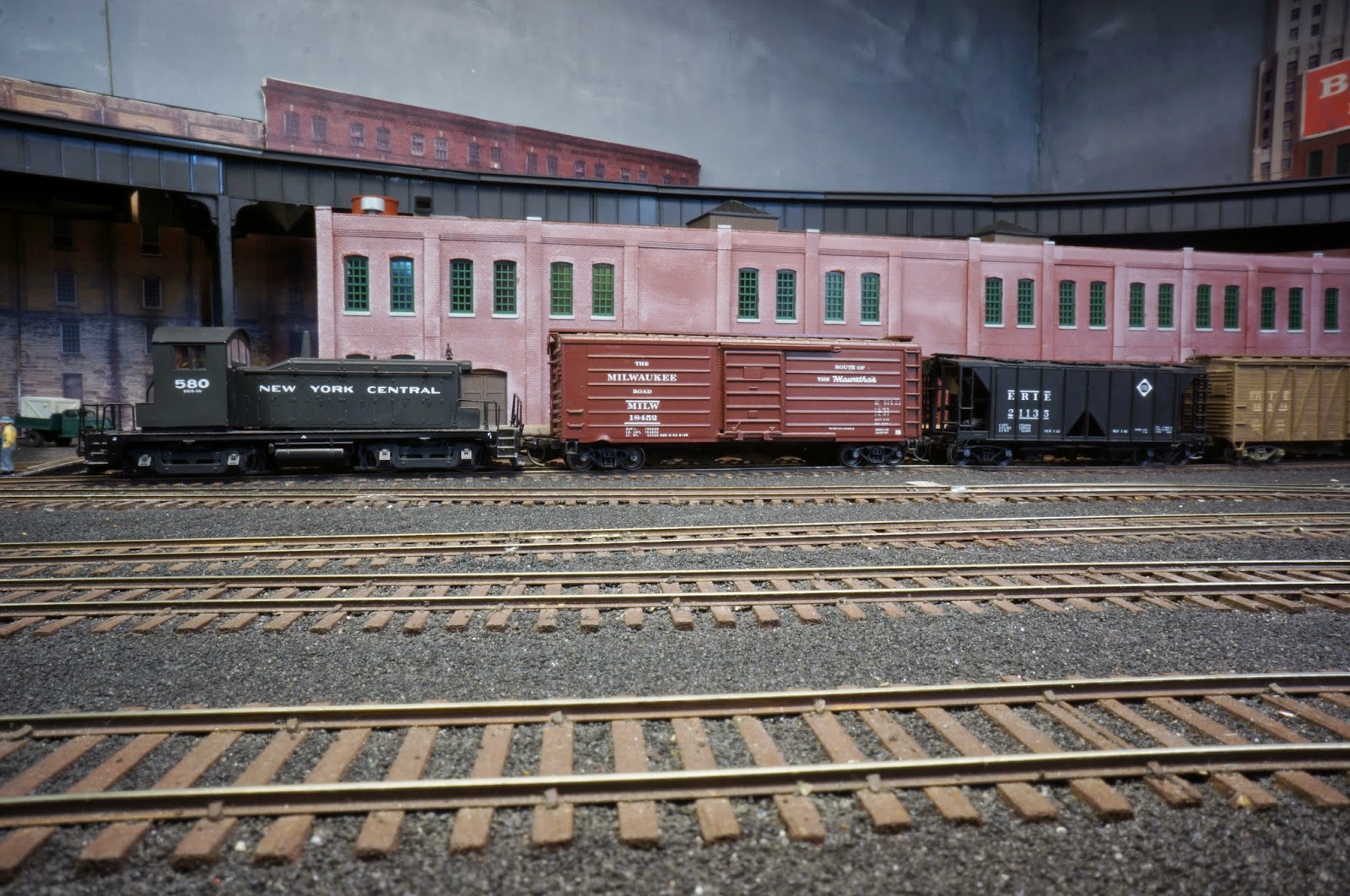 Switching out the cleanout track. 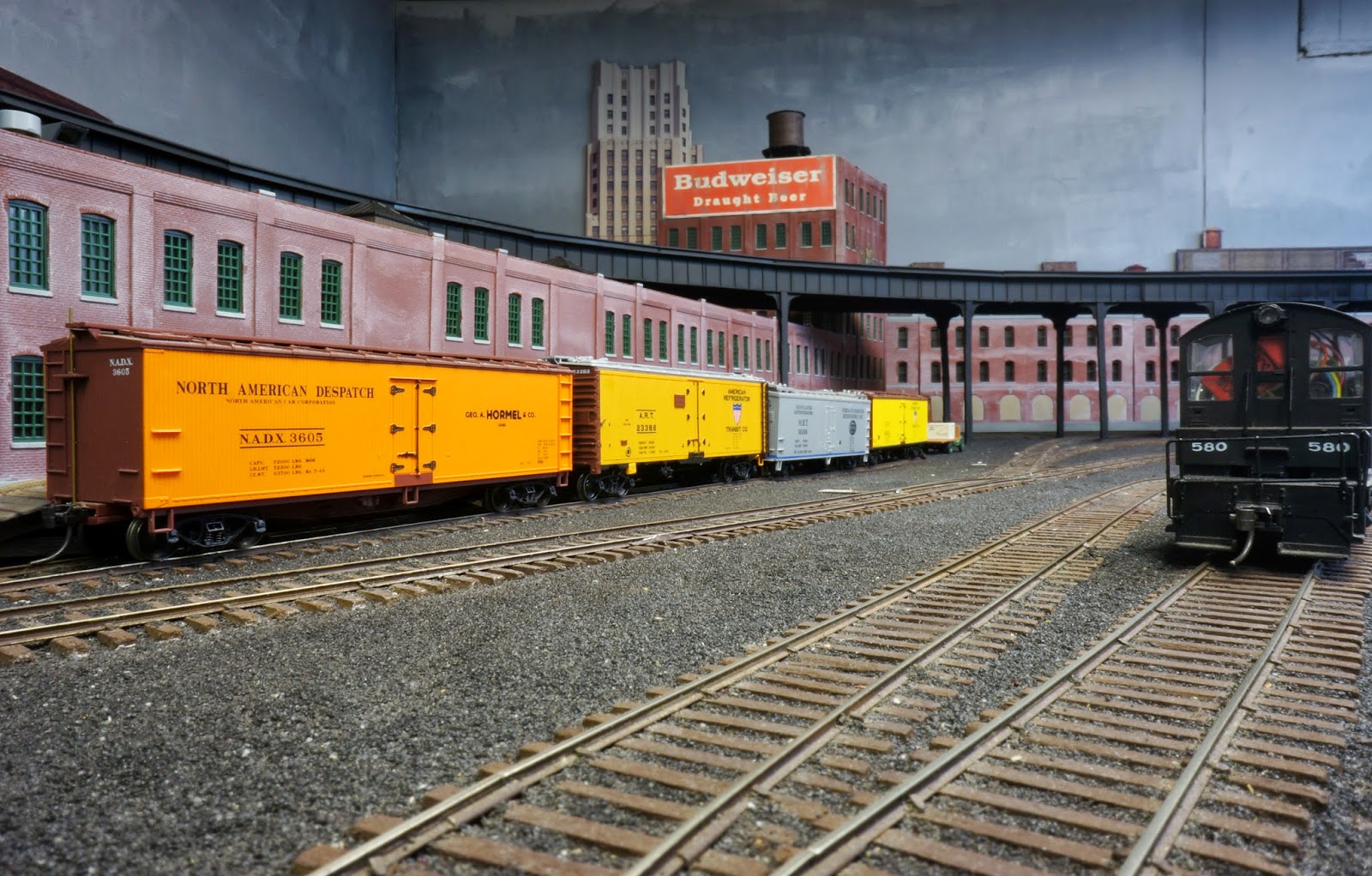 Reefers at the cleanout track.
Anheuser Busch is the large building behind it. 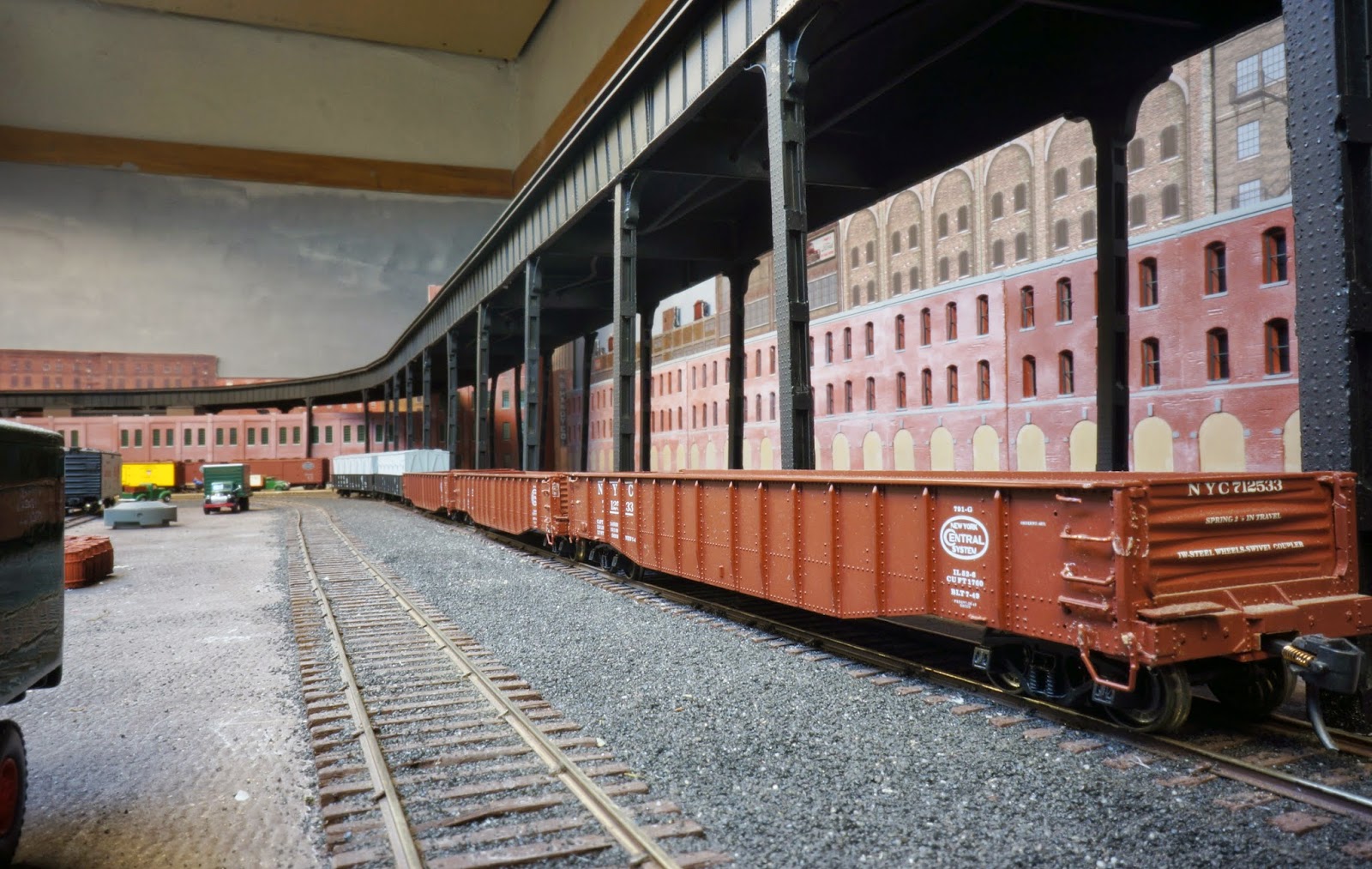 The gons in this and the next picture are on the Steel Track. 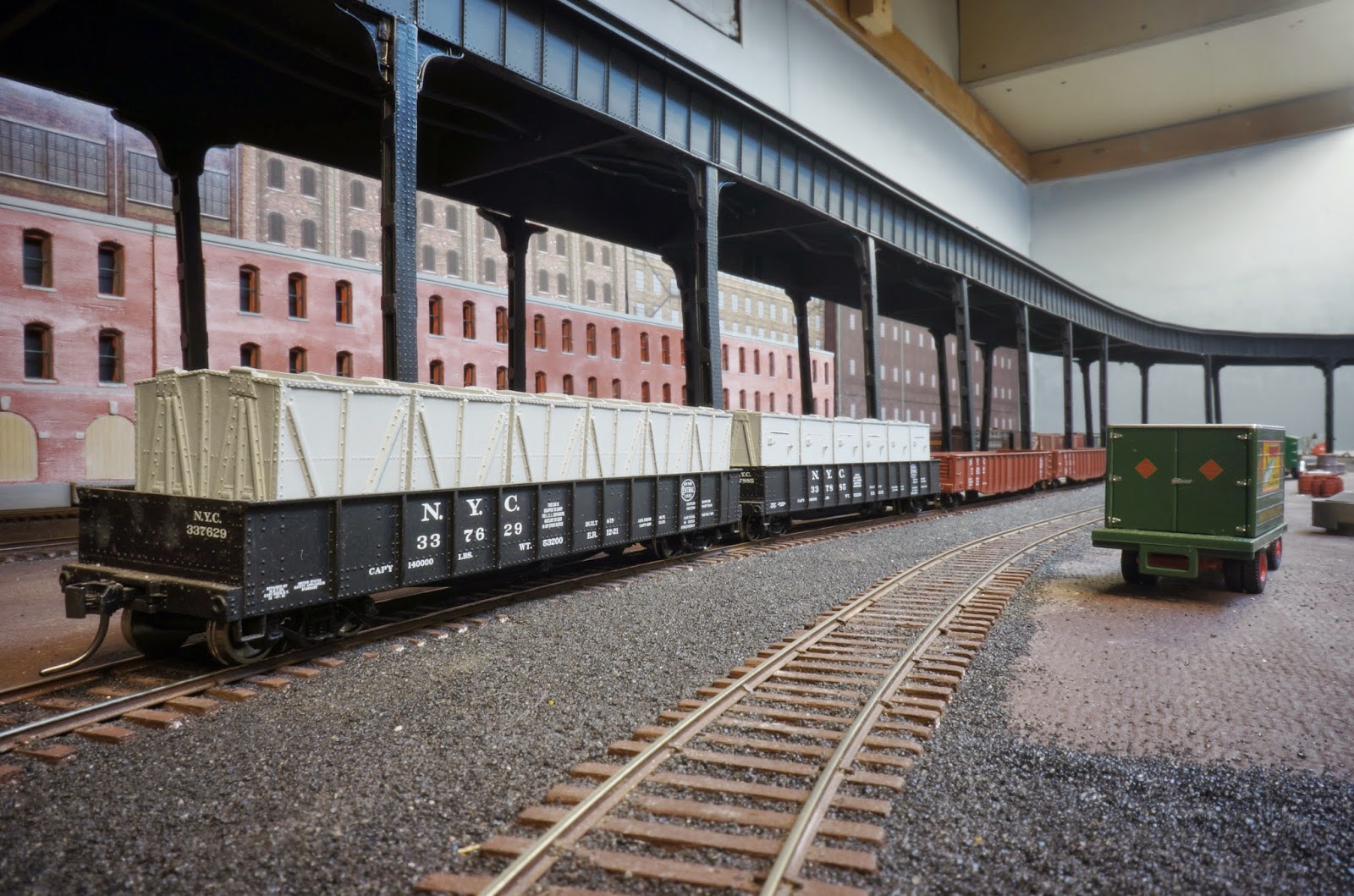 The Steel Track will eventually have an overhead crane. 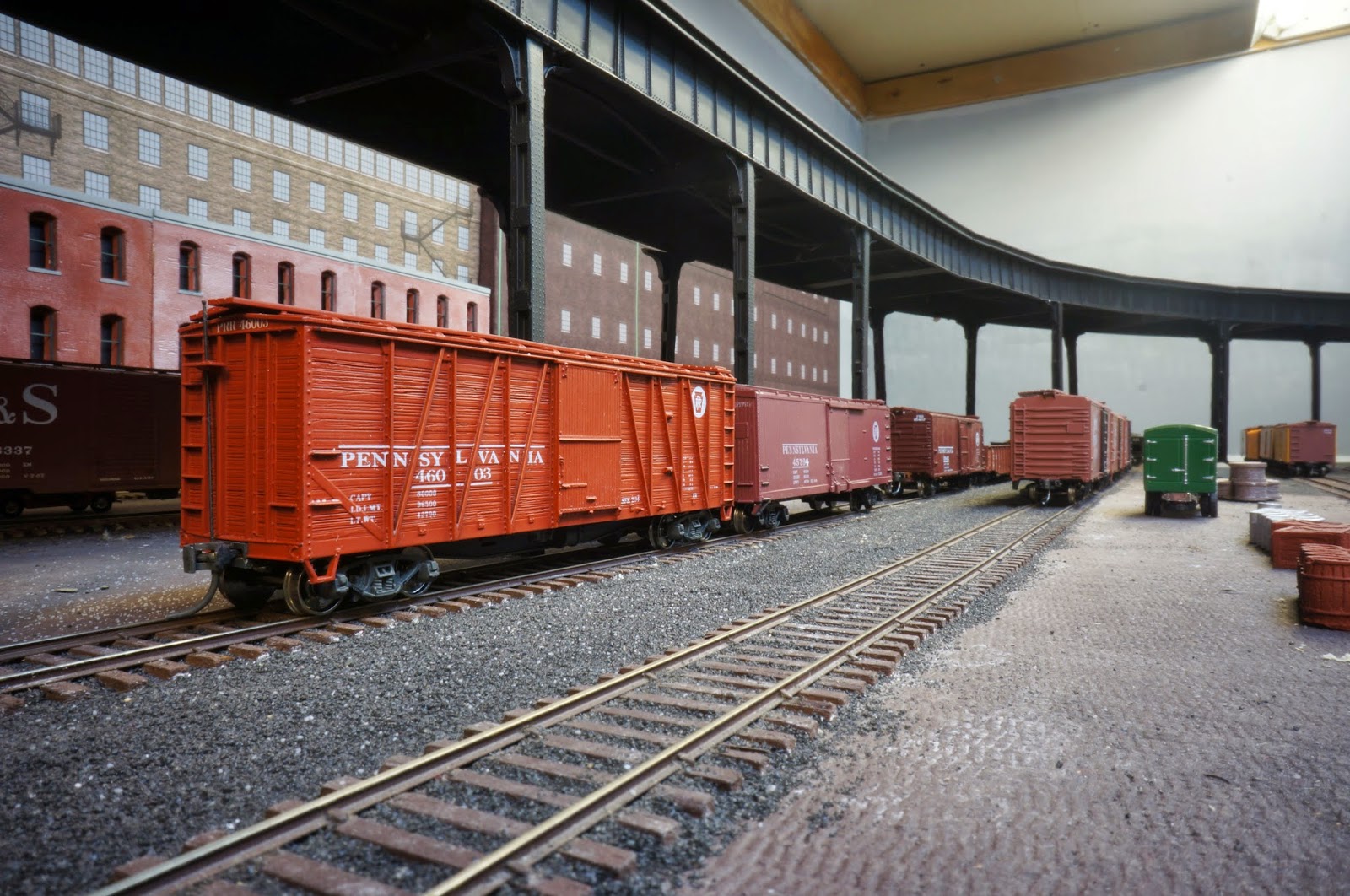 The track to the right of the Steel Track is a Team Track.
The track on the other side of the High Line is another Team Track. 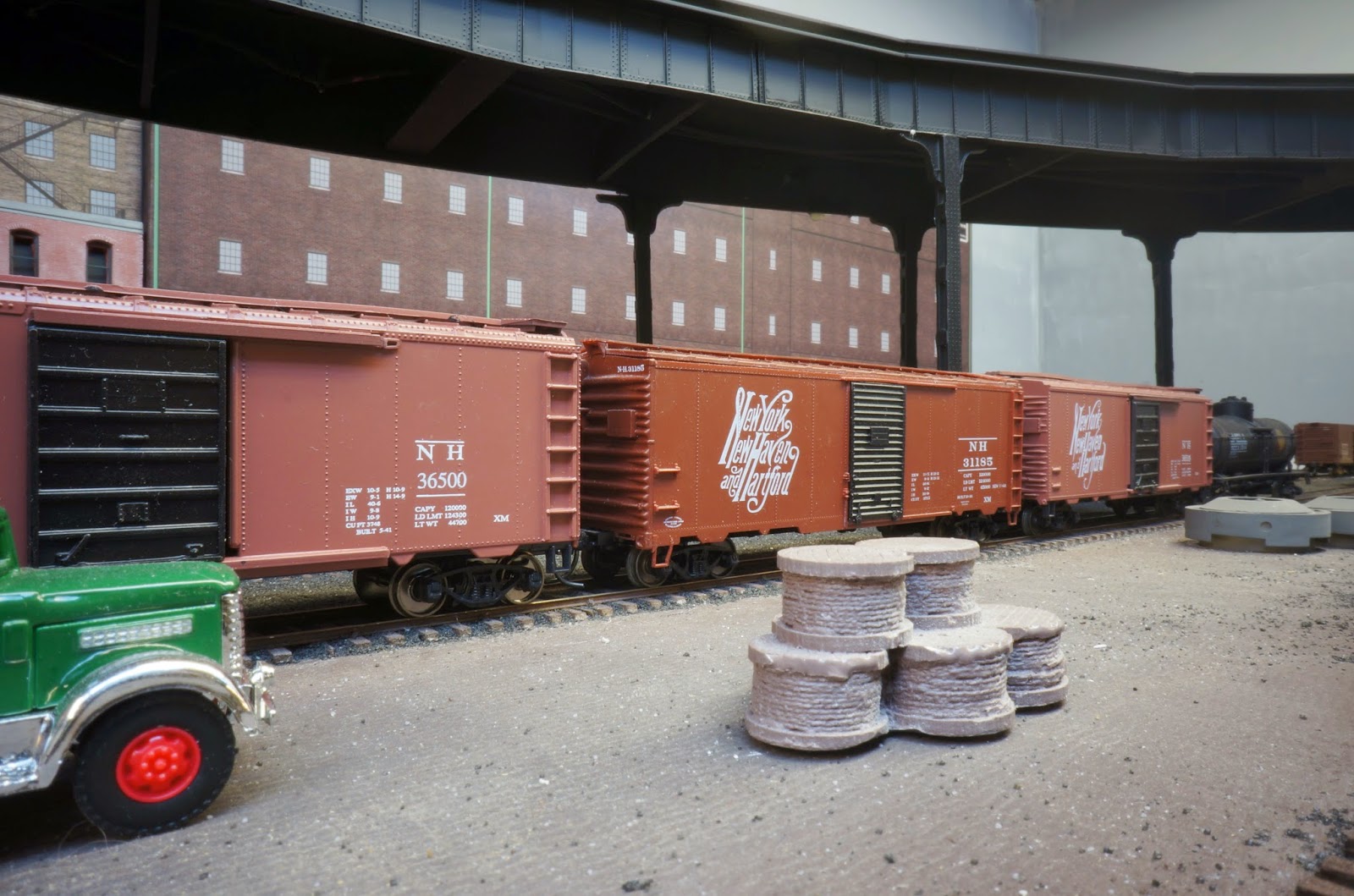 The large building in the back is the Stanley Soap Co. served by its own track. 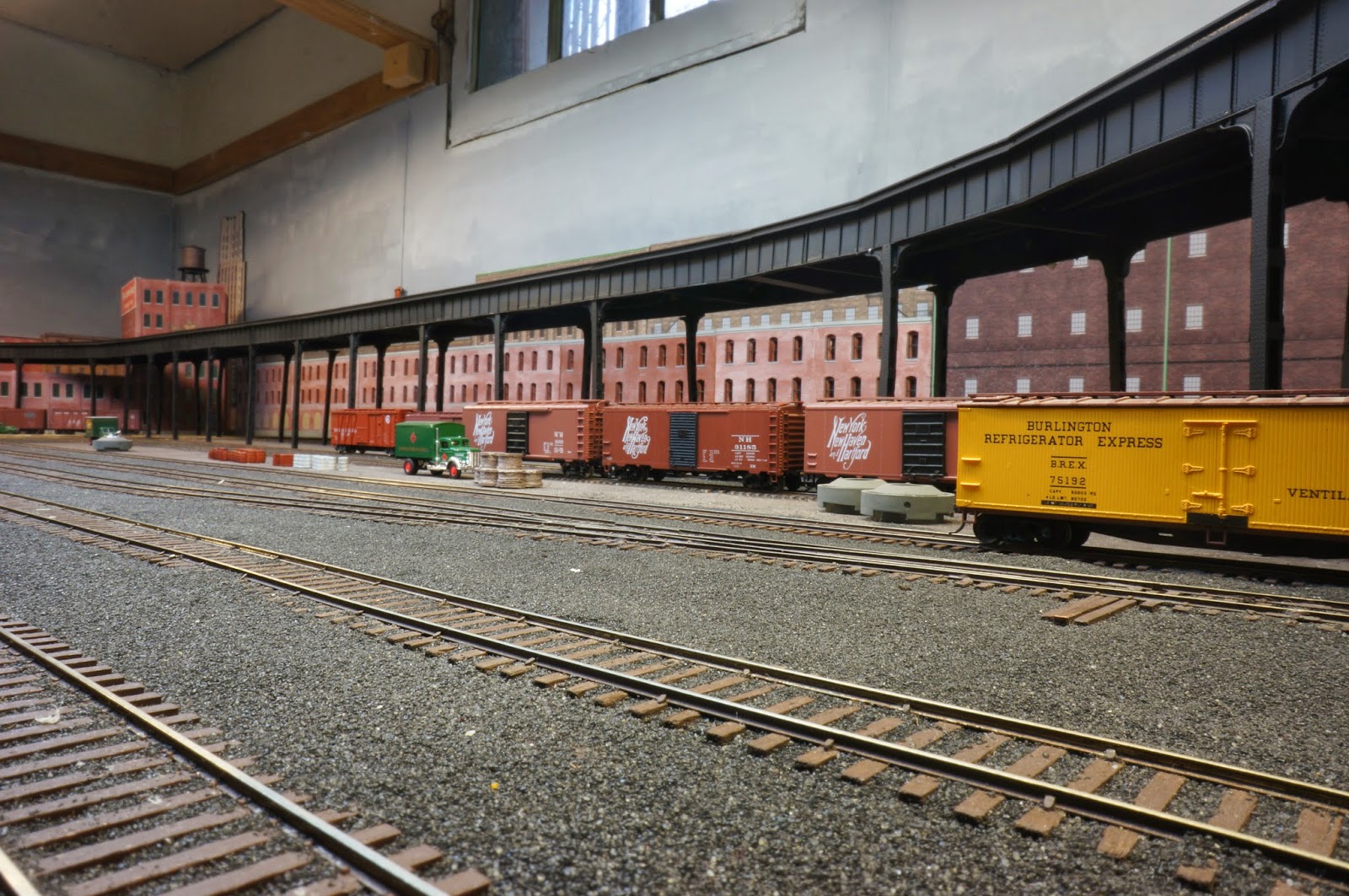 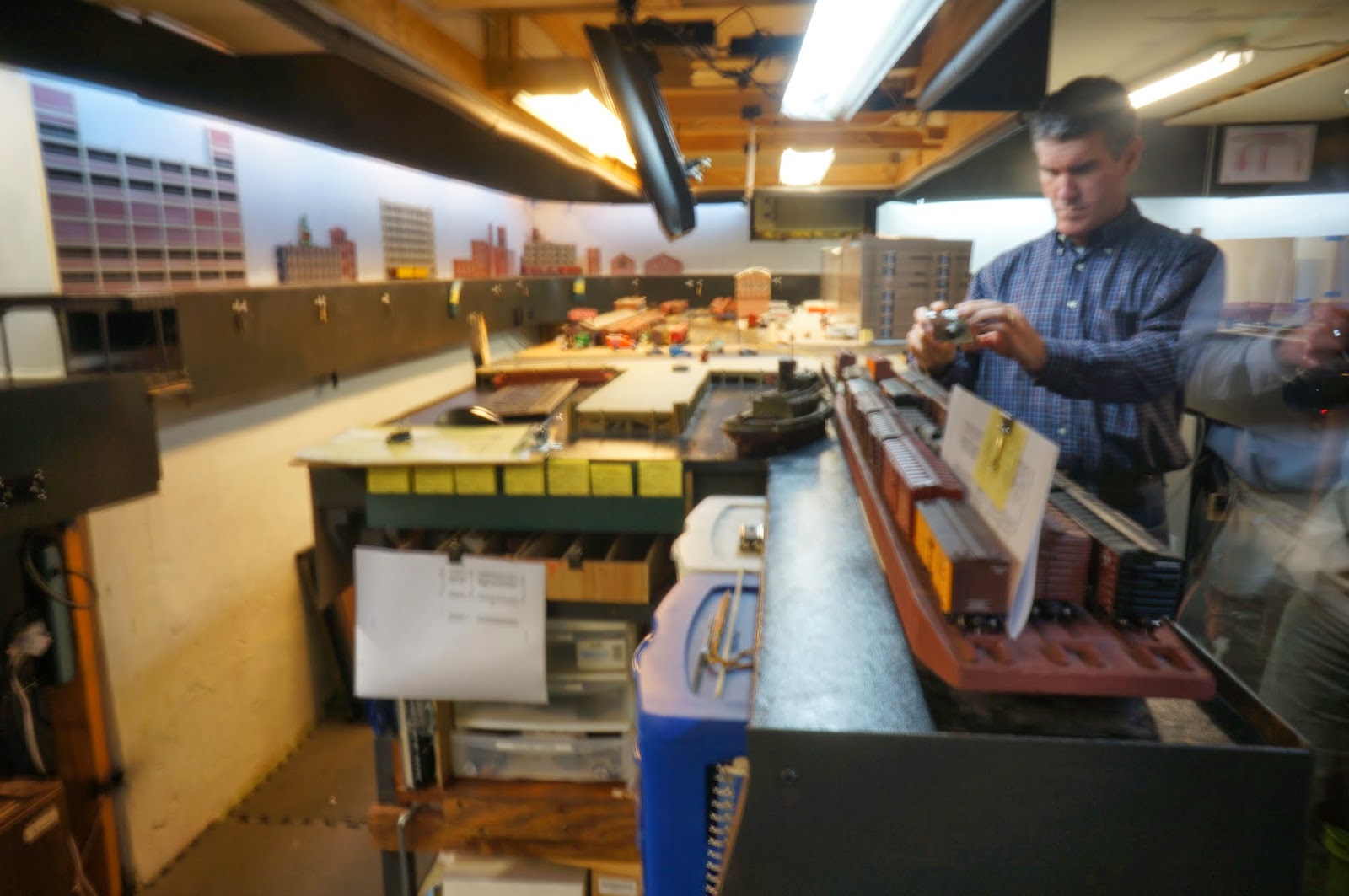 A somewhat blurry picture of Chris taking a picture of the Erie Car Float.
In the background is the Erie Yard, and the large building beyond Chris's camera
is the Terminal Stores Building.
The NYC West 33rd Street yard is off camera to the left and connects to this section via a lift out.
The High Line can be seen around the perimeter of the room.

On another standalone section is the Lehigh Valley West 27th Street Yard. This is another entirely independent layout other than the fact that the LV also services the Terminal Stores building.
I didn't take a good shot of the LV yard, but in the picture above it's behind and to Chris's right.

There is no interchange at all between NYC, Erie, or LV, they just service the Terminal Stores building independently.

The fourth section of the layout is the High Line, which passes over the NYC West 33rd Street Yard and continues around the entire room. The High Line terminates at the St John's Park Terminal inside a large building. 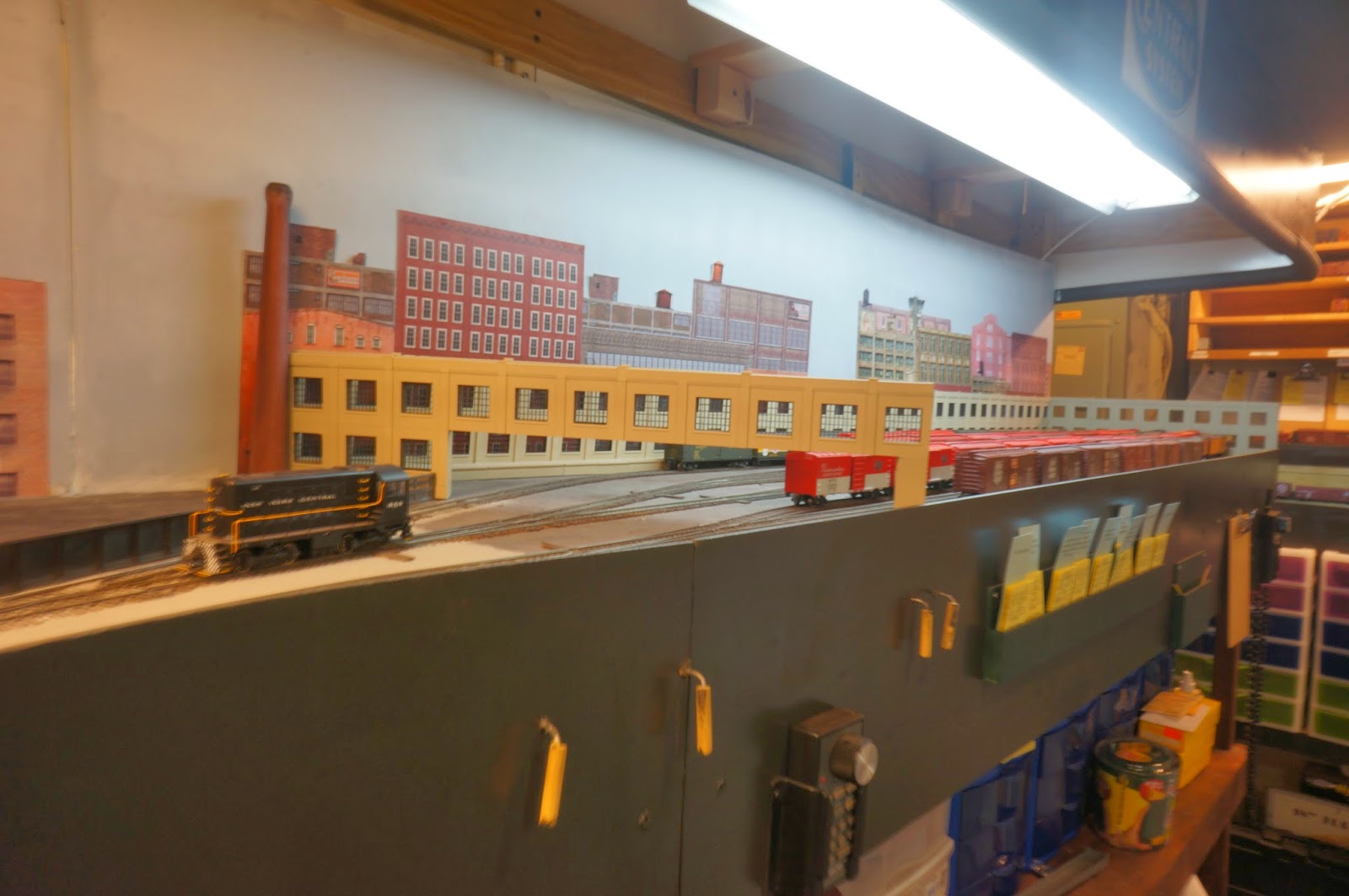 St John's Park Terminal on Dave Ramos's layout.
Note that beyond the angled wall all of the tracks are inside the building.
On the back wall is the active staging that serves the entire layout.


All of these four sections operate independently.


Here are a few more pictures of the Erie West 28th Street Yard. 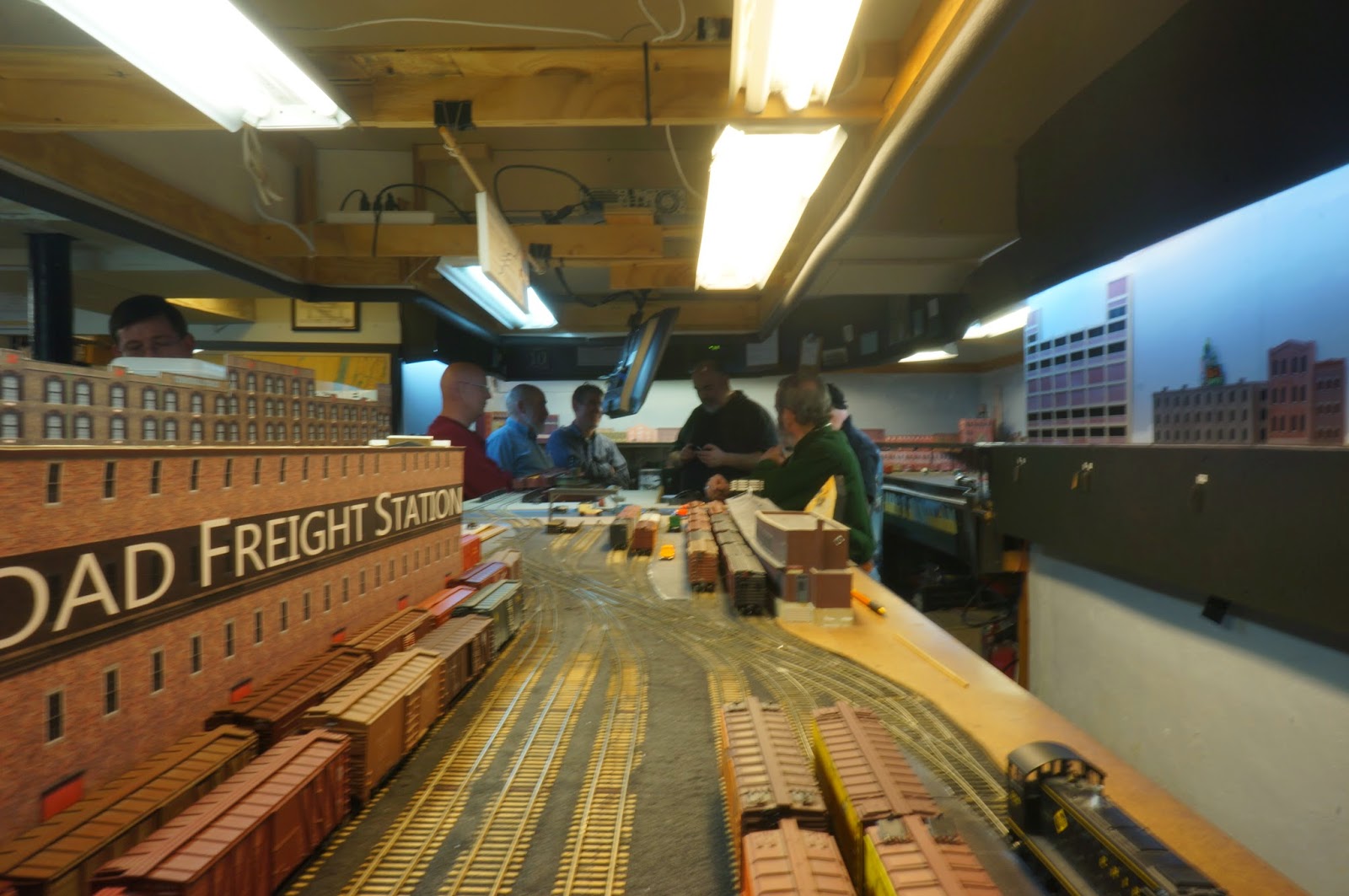 Overview of the Erie West 28th Street Yard.
The NYC West 33rd Street Yard is in the back right corner. 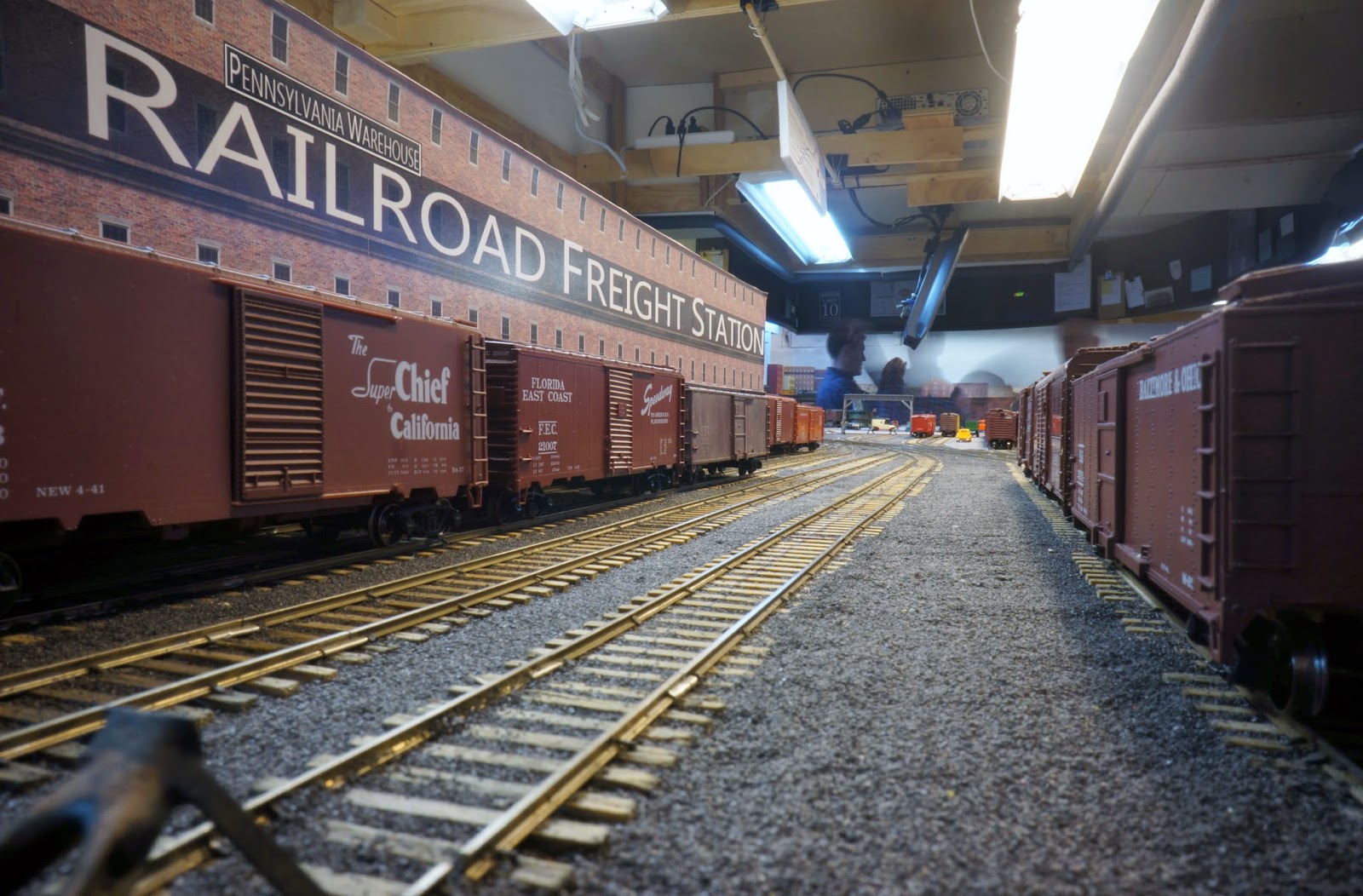 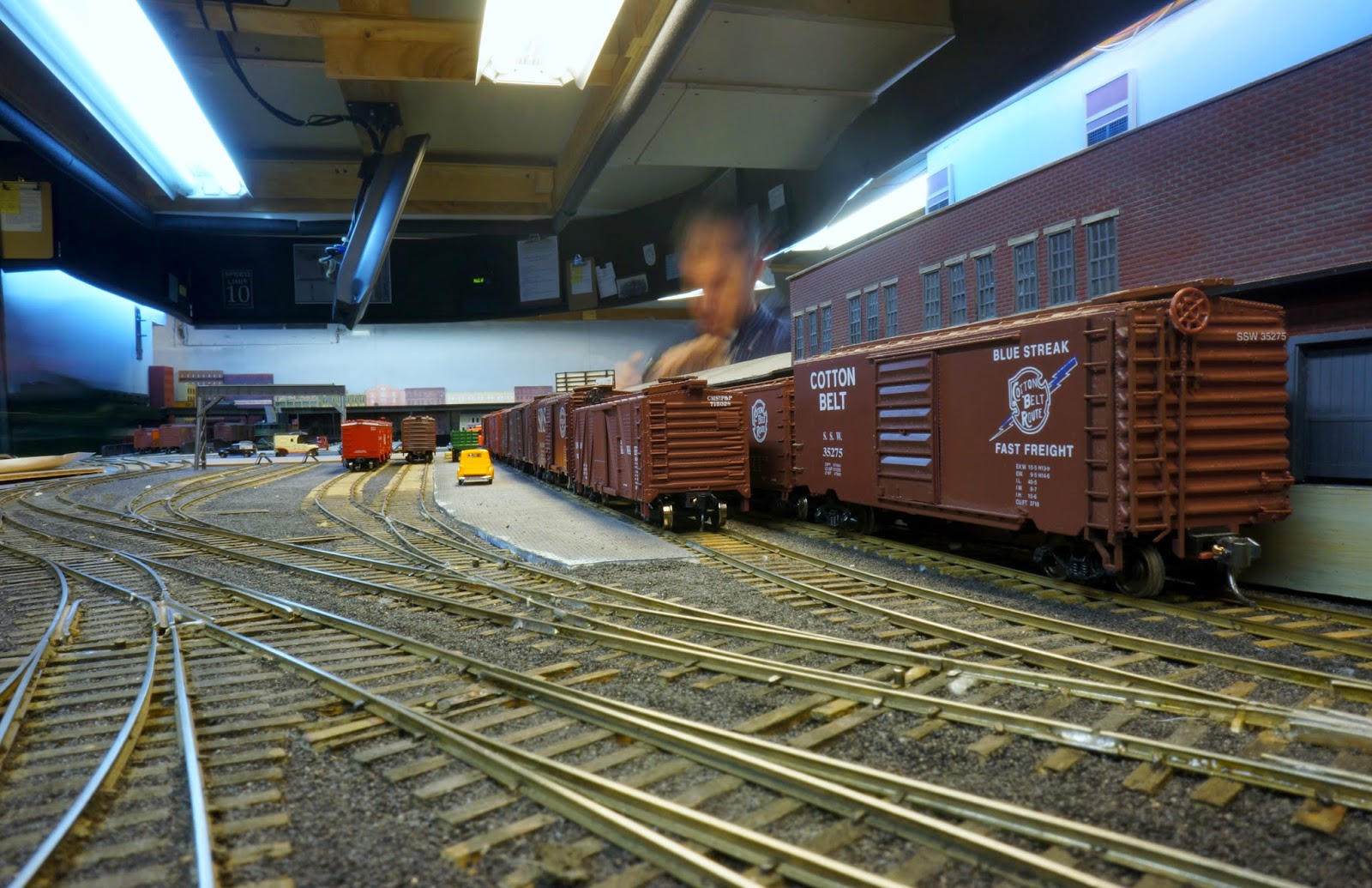 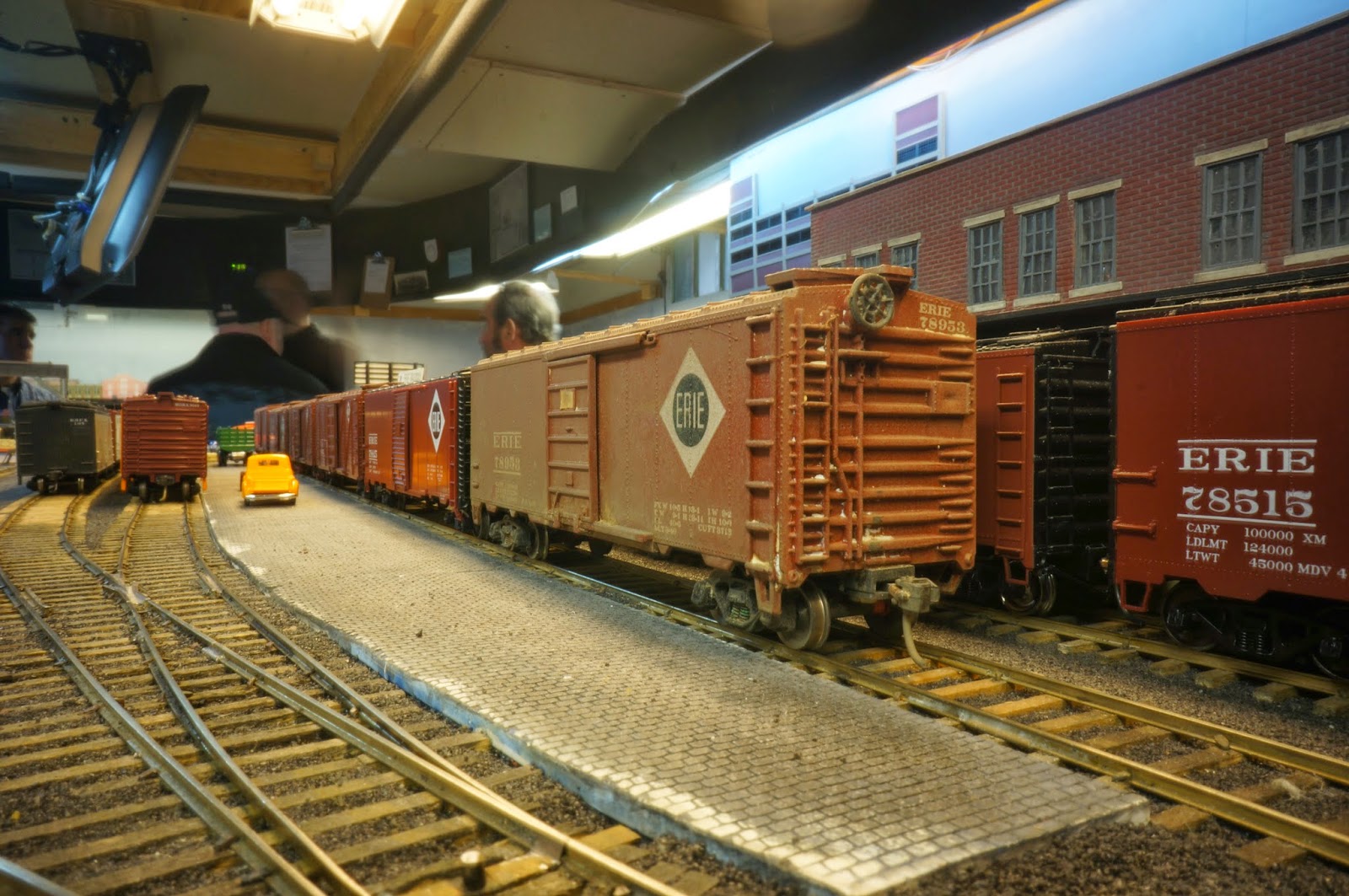 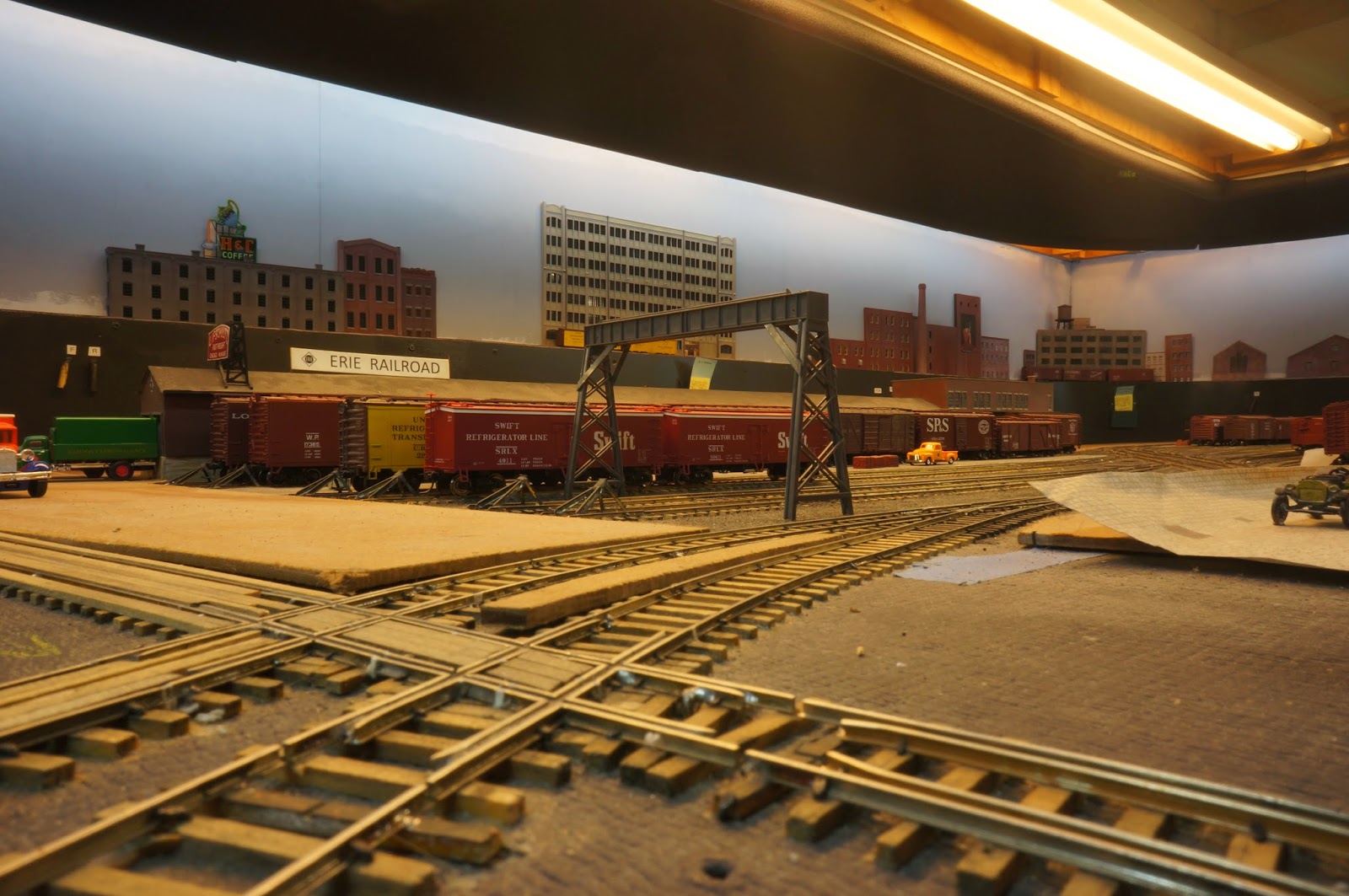 The NYC crosses left to right, Terminal Stores is to the right.
The two Erie tracks are to the car float. 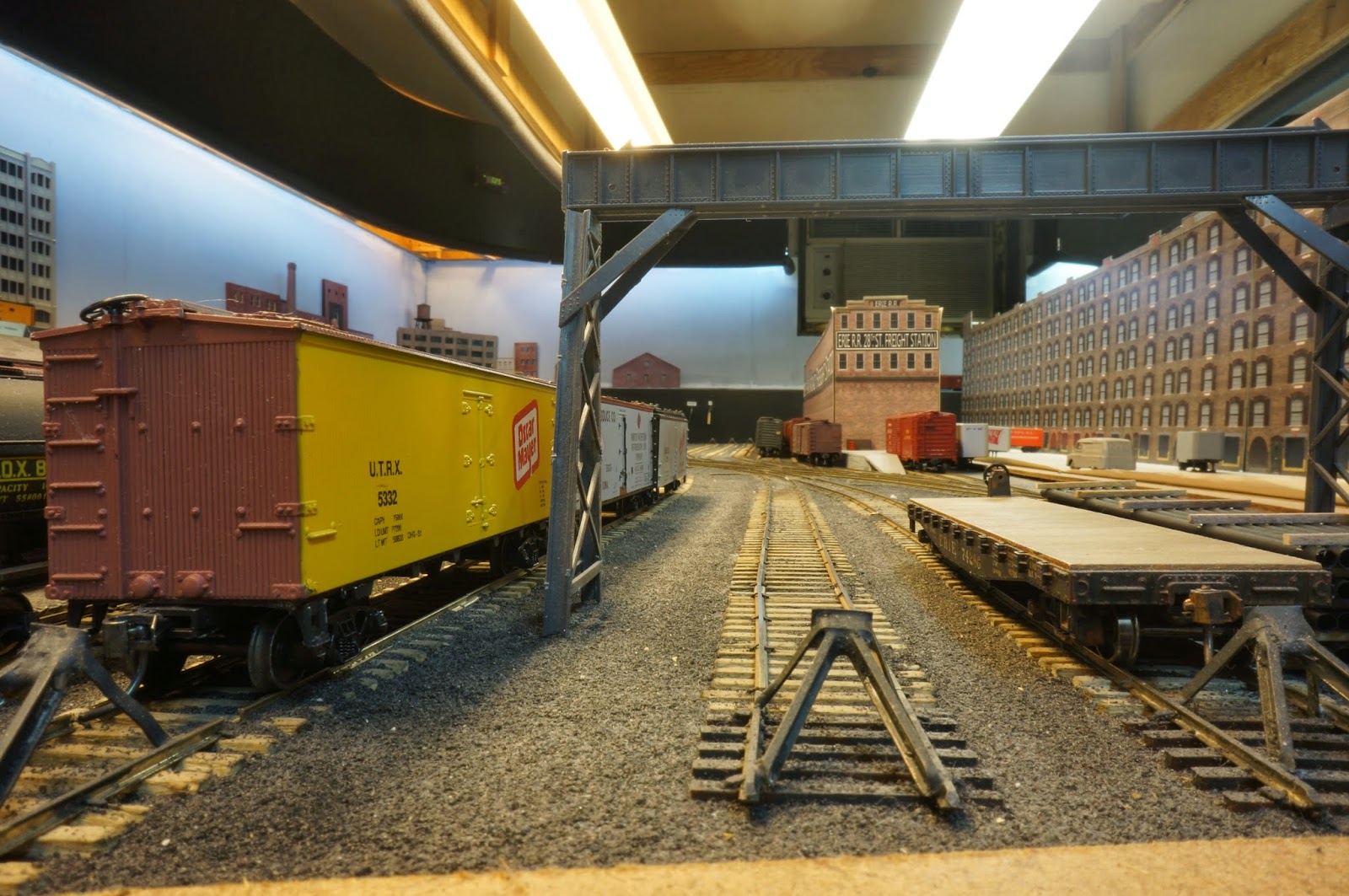 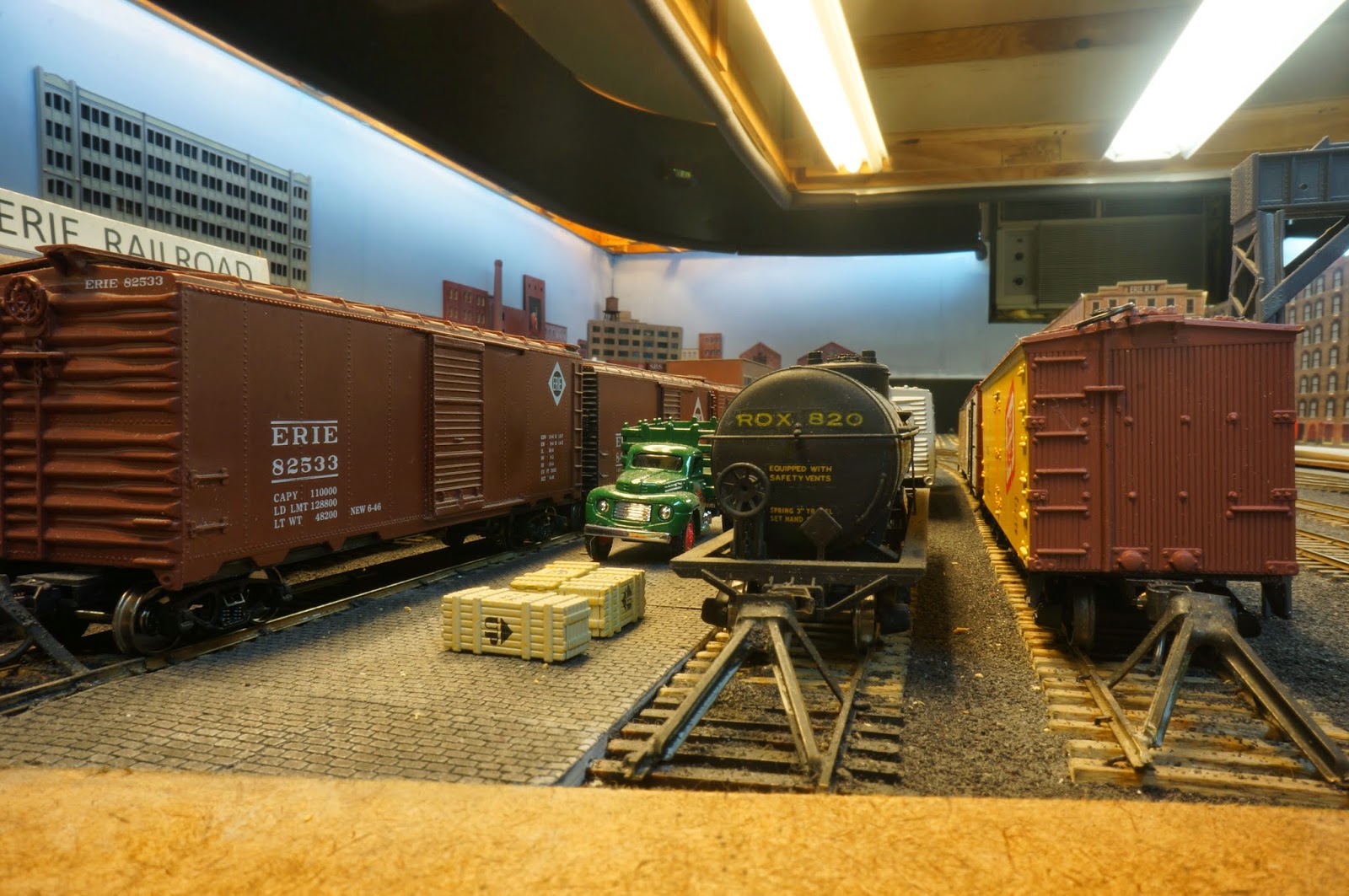 I can't wait to get back down there and try one of the other layouts. Thanks Dave!
Posted by Randy at 10:52 PM No comments: