So I've been taking Chris' advice and working on the layout in little bits whenever I can squeeze in a few moments. Sometimes that's 15 minutes, or even an hour or two, in the basement. Other times it's working on models upstairs while Laura watches TV. In many cases I'm working on something else, but when working with computers there's often a lot of waiting. So part of what I've been doing (since I'm already at the computer) is to go through my notes, research, etc. and piece together some plans for the layout.

As you know, last year I left off as Chris and I were starting a hopper project. Part of the process for me (for any type of freight car really) is to take a look at what's available and compare that to ORER and roster information. So here's what I've put together so far for hoppers, or at least the primary hopper fleet I'm looking to build.

I was pleasantly surprised to find that the majority are available in accurate and quality models. A group (mainly the PRR ones), will require upgrading older models and won't be quite up to today's standards but they will be more than just 'good enough.' If I feel like it, most of them are available as resin kits from Westerfield.

I am already building a number of resin hoppers from F&C. These are the new one-piece bodies and they are fun to build, if a bit more time-consuming than a styrene kit. If the Westerfield ones are released in one-piece body versions then it's likely that I'd opt for those over the Bowser kits.

I will (and already do) have other hopper models, mostly of the same prototypes from different roads. We've seen plenty of photos with hoppers from all sorts of roads on the NH and they will appear in smaller quantities during operating sessions.

In general, hoppers didn't travel as far from home roads as box cars, flat cars, and gondolas. The primary lading was coal, and the farther it traveled the more it cost. In addition, some 60% of Connecticut's coal came via ship and not rail.

Anthracite Coal
Anthracite was commonly used for home heating because it was cleaner and more efficient. Thus the many online coal dealers would carry anthracite, often in several different sizes. Anthracite was mined in northeastern Pennsylvania on only a handful of roads: CNJ, D&H, DL&W, ERIE, L&HR, LNE, LV, O&W, PRR and RDG.

The best I can tell, the majority (if not all) of the anthracite traffic arrived via rail. The CNJ, ERIE, LNE, LV, O&W, and PRR had direct interchanges with the NH. Those roads that didn't (D&H, DL&W and RDG) had connections directly through one of those carriers.

It was not uncommon for a coal dealer to advertise a specific brand of coal. For example, in New Britain, Stanley Svea & Co apparently advertised and sold Old Company's Lehigh Coal. This was a company that was owned by Lehigh Coal & Navigation Company, who also owned the LNE to service their interests. In addition to the Lansford and Tamaqua colleries serviced by the LNE, they also had locations served by D&H, DL&W, ERIE, and RDG. So it is most likely that hoppers to Stanley Svea will be from one of these roads.

Bituminous Coal
A huge number of roads serviced soft coal mines throughout the eastern US. Some 60% of CT coal arrived via water routes, rather than rail. I suspect the majority (if not all) of this was bituminous coal from the Baltimore area, and I'm also guessing that a large amount of this coal was destined for NHRR use, along with large industries on the CT coastline. The remainder would have most likely been delivered to industries and other engine facilities along the line in NH hoppers or gondolas.

The remainder of bituminous coal would have come via rail by the same routes as anthracite. In addition to the anthracite roads, photographic evidence shows large numbers of B&O and NYC hoppers on the NH.

Other large coal roads (C&O, N&W, etc. probably contribute some rail traffic, but in most cases I think coal from mines on these roads came via water routes instead. There are a number of smaller roads (P&WV, WM, etc.), or coal lessees (Berwind and Westmoreland come to mind) that would be appropriate for an occasional load as well. I already own some cars from these roads, and will undoubtedly add more. Remember that I differentiate between my roster of cars owned, and the mix of cars on the layout during a given operating session. I'd like the mix to be different each session rather than every car being on the layout at all times.

So here's my primary list of hoppers - somewhere right around 100 cars:

L&HR (0)
L&HR had a roster of 102 cars in 1947, 64 of which are hoppers. But there is a notation that they are in special service, and thus highly unlikely that they'd appear in New Britain. Now if I was modeling Maybrook...

Yep, that's right.  I've actually been down in the basement working.  The first time since August I think.  I've been relaying the yard,  cleaning and organizing the basement,  tried the airbrush on a few things,  and am experimenting with some scenicking.
Here's a sample for now. The water column is new, painted it (and the concrete base) today with the airbrush. More weathering is needed of course. Playing around with the Scenic Express weeds. 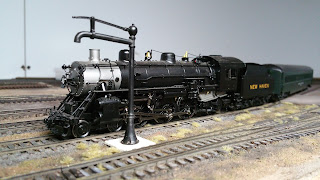