The End of an Era

Well, it is with very mixed feelings that I direct you to Bill's most recent blog post.

Obviously I'm quite sad to see this turn of events, as operating on the O&W in Roscoe and Livingston Manor was the first  prototype model railroad that I've operated and the layout has been a huge inspiration for mine. I'm sure that we'll see more fantastic modeling from Bill, but I figured I'd take this opportunity to recount how influential Bill's layout has been to me. If I'd run into Bill earlier, it's entirely possible I'd be modeling the O&W.

I had been out of the hobby for about 15-20 years when we took Jessica on a tourist railroad ride in Easton, PA. She doesn't like loud noises, so she wouldn't get very close to the steam locomotive, but when it was time to leave, she just wanted to stay and watch it as it sat waiting for the next run. She was fascinated. So that was all the excuse I needed to get the trains out of the attic again and see what she thought. Of course, I knew that it was really for my own enjoyment.

I thought my space to work with was small since I only had a portion of at 10 'x 20' basement to work with. I knew I wanted to model a bridge, and thought modeling the Springfield line from Springfield, MA to Hartford, CT would work well. Of course, this was before I realized a 12-car passenger train with double-headed DL-109's would be about 14' long...

After I had come across Bill's website, and read and re-read things thoroughly, I had narrowed my focus to Windsor Locks, the CT River bridge, and Thompsonville. I made a point of hunting him down at my first Collinsville Prototype Meet. We chatted for a bit and learned that we had known each other two other times (going back to when I was in elementary school). Of course, there was no way I'd miss the opportunity to see his layout in person which was on the tour that Sunday.

So I spent the majority of that Sunday there, after quickly checking out a couple of other layouts. To me the whole point of the hobby is to have fun, and the other layouts did a great job accomplishing what the owner intended, but weren't what I was looking to do. When I got to his house it was clear that Bill 'got it.' Or to be fair, since his layout was already built, I 'got it.' This was what I wanted to do.

The point is, for the first time I really understood what prototype modeling was about, and I knew that this was exactly what I wanted to do with my layout. But there was still more to learn as I soon found out.

Bill had an operating session scheduled the next Tuesday, and due to a last minute cancellation I was initiated into prototype operations. It was instantly obvious that my choice of prototype wasn't quite right. My layout would have had a single local freight (like his), and a couple of through freights, but the number of industries was limited, and I was going to have to cut out 1/3 of the local job because of a branch line I couldn't fit. My main concern was the passenger trains. Had I followed the concept to my current design, it probably could have worked to some degree if the trains were going to staging via the helixes I have now. But it still didn't feel quite right.

Moving down the Springfield line I came across an old photo of New Britain. It's not actually on the Springfield Line, but is the first town down the Highland Line which had the benefit of eliminating all of the long passenger trains. 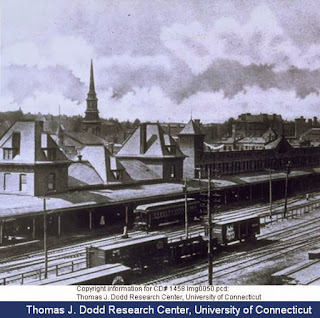 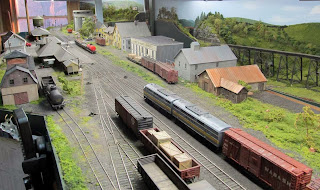 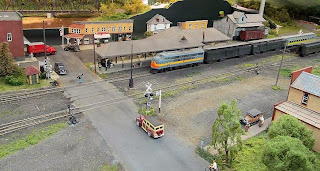 In both towns that Bill selected to model, the activity happens right in the center of town. New Britain was the first town on the New Haven I had seen with a small yard right in front of the station, similar to what I'd operated, particularly in Livingston Manor. The yard there is actually at one end of the town, but still right in the same area.

I know that none of these are entirely new concepts, but the way Bill's O&W fit them into such a compact and complete layout made sense to me. And it seemed to be entirely different to what I had seen in the magazines before. And I can confidently say that my current layout and approach to model railroading would be very different if I hadn't first visited these two towns.

By the time I got around to starting construction on the layout I pretty much went back to Bill's as both inspiration as well as to make sure I was following as much as possible one of the most well executed layout's I've ever seen on many levels. I wanted to avoid a helix, but once again I found that the helix worked well when properly executed. Although trains did go between towns on Bill's helix (and if running at the proper speed by coincidence also took a prototypical amount of time), looking at each individually the effect was that of a train entering and leaving town.

Now that Bill's O&W will follow the path of Tony Koester's Allegheny Midland, or Dick Elwell's Hoosac Valley, I only hope that it won't be too long before it too reborn again. It's hard to imagine the layout being better, but who knows? I look forward to seeing what he'll do.

And I can only hope that since my Springfield Line layout has already been dismantled and been reborn in New Britain that I've already completed this step!

I routinely see commentary regarding some of the great model railroads of the past, and while I can see the greatness of those railroads, they don't speak to me in the same way that the 'Old Woman in the Back Bedroom has.

So thanks for the inspiration Bill!
Posted by Randy at 8:39 PM 1 comment:

So, I figured that since Chris has been making regular updates to his new blog, I ought to post something more substantial.

At the NE Proto Meet this year I picked up some more photos from Bob's. Of particular interest is one of T-2-b class switcher #2446 on the pit in New Britain. 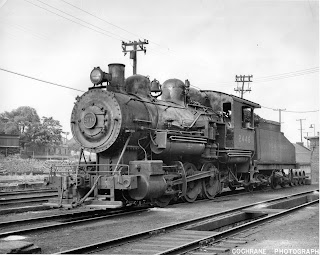 OK, I suppose this shouldn't be a surprise. Where the T-2-b is sitting used to be inside an engine house. Back in the '20's in addition to the local switchers assigned to New Britain, other locomotives were assigned here for other cities. For example, the Bristol switcher is stationed here. Back before the '20's there was even a turntable at New Britain.

I don't know exactly when, but at some point the engine house was mostly demolished. The south wall, and the structure attached to it remained, as did the engine tracks and an RIP track. However, until I found this picture I had no idea that there was an engine pit (well, two actually) still there.

So once again I need to make some changes to the layout. This is a minor one, and primarily a scenic one, but it will require me to cut out a small portion of the benchwork.

In addition to confirming some more scenic elements (also note the pipes and pile of crushed stone in the background at City Hardware, and the extra wheels behind the locomotive), it both confirms and confuses the assignment of the switcher. The confusing part? Well, it's Tom McNamara's handwritten note on the back:

So this sounds OK. The other photo I have of #2446 is from September, 1946. Another Cochrane photo shows a 44-tonner (NH class DEY-4) on the coal trestle at Russell & Erwin in March, 1947. So the notation makes some sense. Except, in this photo #2446 looks pretty clean, has a very full load of coal, and the stack isn't capped as would be expected if it were sitting for over a year.

From what I've heard, Kent didn't take great notes, and his dates are often suspect. So this could be a case of a mistaken date. But assuming the season is correct (and it's certainly spring or summer), we're talking about a 1 year discrepancy.

So what difference does it make? Well, I've stated that I'm modeling 1946-1954, with the intention of swapping out scenic elements and running the appropriate equipment. Bill discussed this challenge in a recent blog post. My current focus is 1947. Since #2446 was still in service in 1947, I'm splitting the difference for now and will run one DEY-4 and one T-2-b. When the layout (and research) is more complete, then the T-2-b's may be restricted to 1946.

For now I just have another great photo to help with getting the infrastructure as accurate as possible.