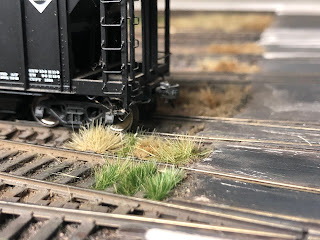 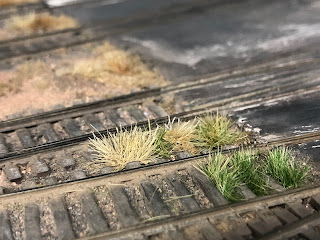 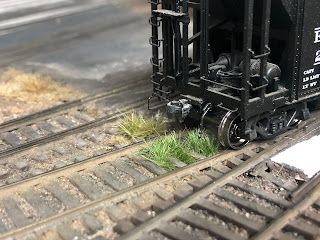 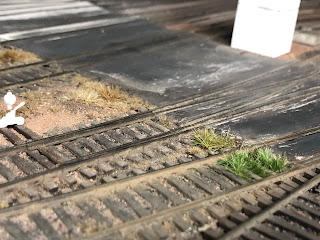 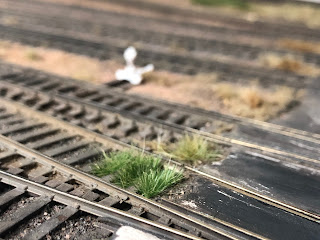 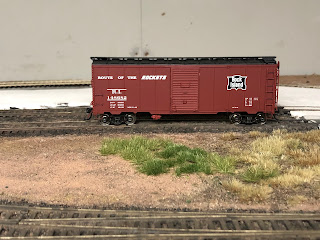 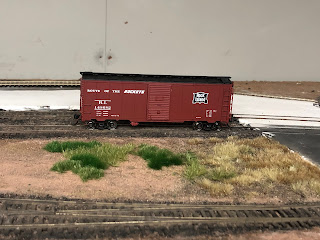 Several different products and colors. They aren't necessarily intended for these locations, but I wanted to see how they'd look in a (relatively) finished scene. I'll need quite a bit... 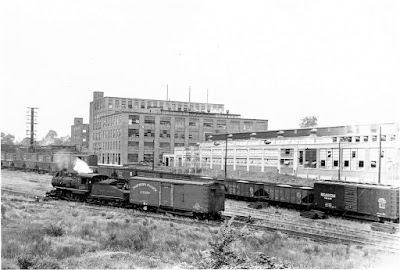 Note the scaffold around the smoke stack, and the hoppers, probably filled with stone from Cooks Quarry just over the border in Plainville. I believe they would have been dropped at Whiting Street to be weighed.
Posted by Randy at 9:54 PM 1 comment:

On my last post, lajrmdlr asked whether I should have called the tracks to Home Depot "spurs" rather than "sidings."

Those who know me know that I can be particular about utilizing the proper terms where possible. Sill step, running board, single sheathed box car, etc. Interestingly enough, a similar discussion just popped up on the Steam Era Freight Car list.

In the railfan/hobby press I have seen a general use of the word spur to indicate a stub-ended track, and a siding to be a double-ended track. In some cases, they might only be referring to a passing siding.

So what about "siding" and "spur?" (And should I be using commas when using quotes in this manner? How about I switch to italics instead...)

I don't recall seeing the term spur in any official NH publications, but I seem to recall industrial sidings and similar usage. So I'll take a closer look:

Siding.-A track auxiliary to the main track for meeting or passing trains.

42. Sidings and other tracks to the right of the main track...

So it does differentiate between sidings and other tracks, but no term is given for "other tracks."

In the Employee Timetable (this one is 6/8/47) it does have some notations in the Maximum Engine Permitted. Under Harlem River, Schorsch & Company (engines not permitted beyond frog on siding in lead 132nd St. and Brown Pl). But I don't know the location, so maybe that's the standard definition. And what should I find under New Britain?

Here's another booklet (from 8/1/27): Instructions to Conductors Regarding Car Reports...also Numbers of Station and Side-Tracks with Distances from Terminals. Incidentally, the terminology matches the NYC in their book List of Industries with Private or Individual Side Tracks. On NH maps I typically see sidetrack (no space).

However, the PRR in Numbers and Names of Stations and Sidings (Form C.T. 1000) which lists all of the, ahem, (industrial) sidings. The instructions also use the term:

14. When new Individual or Company sidings have been installed... and also throughout the document when referring to industrial sidings.

So, like so many things it appears that within the industry there isn't a standardized term. However, on the NH it looks like in general, the term siding is not used (often) for tracks other than what we would normally consider a passing siding. Side track, sidetrack, private track, industrial track, and spur are all used in various official publications. They are often referred to by the name of industry as well. So in the prior post I could have simply gone with Home Depot Tracks and for the most part the crew referred to them as the boxcar track and the flat car track.

This ended up being longer than I thought (not that I should be surprised). At some point I might dig into local/way/peddler freights, and I'm working on a longer article/clinic on AAR Standard Box Cars. And don't get me wrong, there isn't anything wrong with using terms that aren't in the official publications of the railroad. Many of the terms (or things like phases of diesel locomotives) have been created to help clarify exactly what we are discussing. And that's a good thing. But in some cases, invented terms have been used and confused with actual terms.

For example, the interim improved dreadnaught end as I've seen noted numerous times in the press. The problem is, it's in reference to a specific end marketed by SREM as the Improved Dreadnaught End. No interim, (although there were several variations dependent upon the height of the car, and further improvements to the design over the years). But the name refers to a specific, trademarked design.