In the first post I showed how I modified the deck and assembled the basic kit.
The second post covered scratchbuilding side sills and measuring and installing stake pockets. The third post covered how I was handling the rivets with an addendum from my buddy Bill Gill here.
The impetus for this particular project was a photo of a T&P flat car which also includes prototype information for that and similar cars.
What else can we do with the Tichy kit?
I forgot to mention an important version of the kit in my earlier posts. The Central of Georgia Railway Historical Society has offered the Tichy kit for several years with custom decals to raise funds to restore a CG flat car built in 1925. As of this writing there are only 9 kits left, but they have decals available too (in several scales). Again, only 5 of the HO ones today. I don't know if they will be getting more of the decals.
While I don't have a diagram, it's a nominal 40' flat car with straight side sills and 12 stake pockets. The end sills are different, so I think I'll scratchbuild those.
But I originally started experimenting with these kits because I wanted to model at least one of the New Haven's 36-foot flat cars.

NH F-232 at New London, September 24, 1951, photographer unknown.
While I have quite a bit of data on the disposition and life of these cars, I only have limited info on this particular one. I know it was renumbered sometime in x-15-1949, but not the original road number or month. Presumably this renumbering was when it was removed from interchange service and reassigned to work service. It was rebuilt (see below) at Readville on 8-2-1938, and was presumably built 1906.
In the March 1951, and February 1953 books it was assigned to a Providence Work Train. It was condemned/sold 4-24-1956.

These two flat cars have not been located for quite some time and it is presumed they were destroyed.

Many of the cars had been converted to work service through the late '40s. Records are incomplete, but it appears that none of them lasted in work service past 1960, with most being condemned and/or sold from 1955 to 1958.

The Tichy model seemed the obvious choice to start, and even better there is still a prototype in existence, at the Connecticut Trolley Museum. They have ex-NH 414944. This car still has it's original KC brake system.
The easy approach is to shorten the car in the middle (instead of lengthening it like the others), then modify the side sills to fit the shorter frame. I started one version with this approach. Since it's so easy to make the side sills and the end sills are different from the model, I opted to do a more substantial kitbash. In addition, I used an underframe from an Accurail 36' double-sheathed box car since it's a better match for the NH car.
This shows the shortened Tichy version on top, with the more extensive kitbash on the bottom. 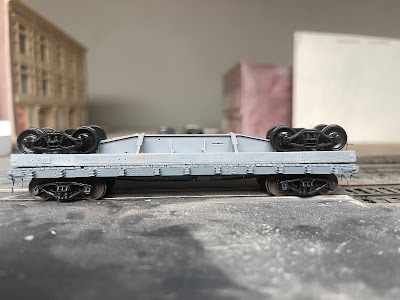 One thing I found interesting is that I had shortened the side sill by cutting just past the second stake pocket from each end, and then shortening the middle section to remove one stake pocket (the NH car has 11 instead of 12). When I measured out and applied the stake pockets for the other car, I was surprised to see that they line up almost identically. The rivets aren't necessarily correct, but this is a quicker option. 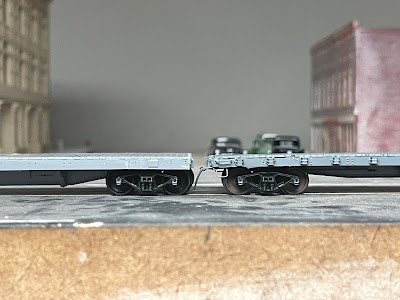 You can see that difference between the Tichy (left) and Accurail (uhh...right) underframe is quite noticeable, even from the side when the car is on the track. 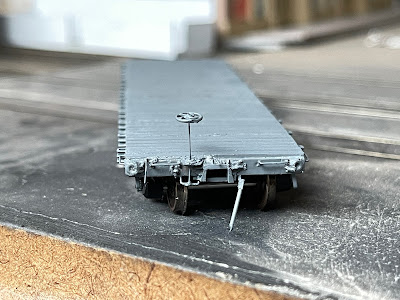 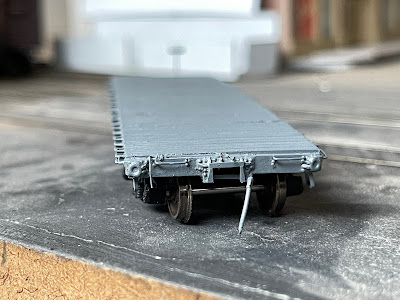 The largest differences were in the end sill. The poling pockets themselves are from Cal Scale, but I built up the casting around them from styrene, along with the buffer. 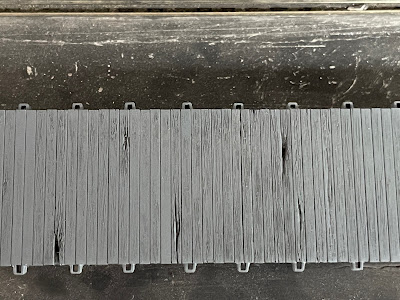 Because this car is at the end of its life, I decided it would be fun to attempt a severely distressed deck.
This will be one of the 40-ton cars, and based on the records I have it will be 42153 (condemned 6-14-1951). To my knowledge, this car was the last of this class in revenue service.
I'll cover the specific modifications in more detail in the next post.
Posted by Randy at 11:38 AM