Part I, II and III...
Next up is an often seldom-modeled detail - coupler buffers. In the case of the DERS-2b this consists of two parts. First is the actual buffer, which is a large casting that is also a close match to what is used on the DERS-2c (RS-3) locomotives. The New Haven also had an extended buffer since these were assigned for passenger service. This is shaped steel and you can see that it is bolted to the buffer itself in the picture below: 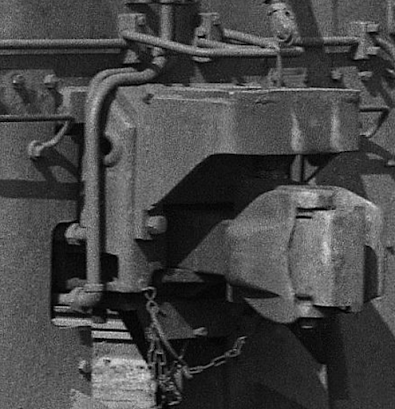 If you examine the photo closely enough, you'll see that there is an upward angle on the top portion that mirrors the angle on the bottom. This is a piece of steel in a 'U' shape, open at the top for the uncoupling lever to attach to the coupler below. Also of note is the hole in the side of the buffer itself. I'm not sure what it's there for, but I wanted to try to capture it. 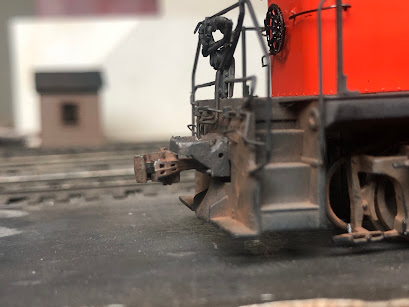 This is my first attempt, which I determined was too small altogether, and too short top to bottom. But like many of my experiments, it served as a proof-of-concept so I could go about making the four buffers I'd need, and was very helpful in figuring out just how I'd go about it.
The starting point is a standard Kadee #242 snap together gearbox (coupler box). I trimmed two pieces of scale 2" x 8" cut .185" long, then cut an angle with the front edge measurement at .125" to form the sides of the buffer. 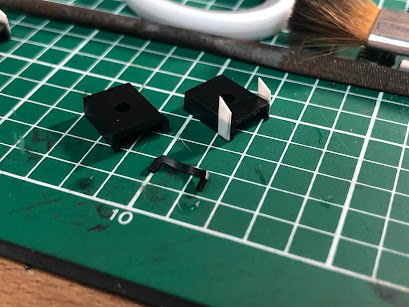 I used .040" x .080" strips for the sides and the front of the buffer. I just eyeballed this measurement based on test fitting with the coupler. 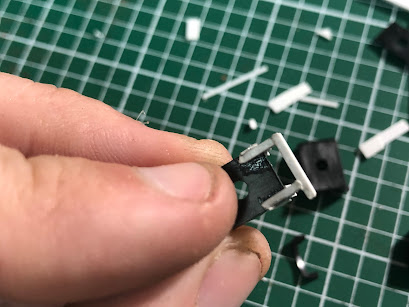 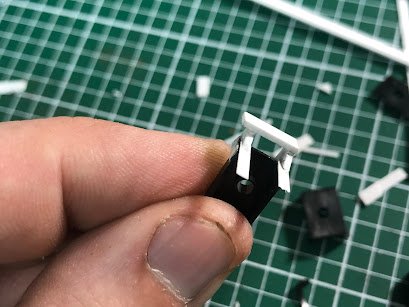 I notched the top of the passenger buffer to match the angle formed by the side, and then back up where that side ended. I then drilled a small hole in each side, and then widened it with a bead reamer so I could fit a piece of .30" styrene rod inside the hole. 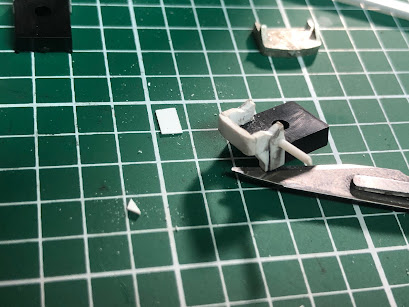 I trimmed the styrene rod and sanded it to leave it just a little proud of the side. I then drilled out the center of it, and reamed it to widen the hole. This formed the ridge around the hole. I then use some scrap styrene to make the top of the buffer itself, and glued 4 nbw castings for the attachment points of the passenger buffer. I filed the edges and corners (and the inside of the front of the buffer) to give it that slightly rounded look of formed steel.
For the other three, I used a small piece of scrap to form the front face of the buffer before attaching the front of the passenger buffer itself. It was easier than trying to do it after it was built. You can see the other completed buffer here, with the other three under construction. 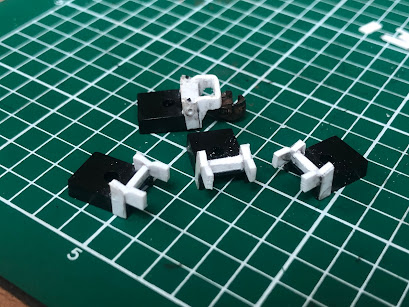 The white didn't photograph all that well, but this is a test fit at this point in the process: 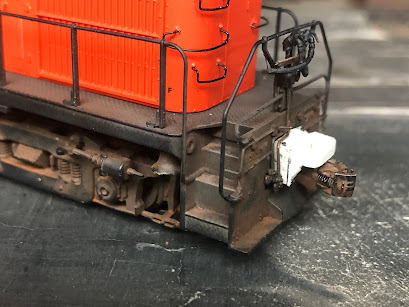 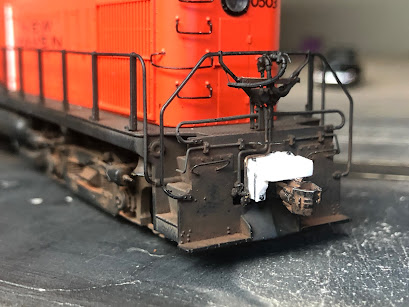 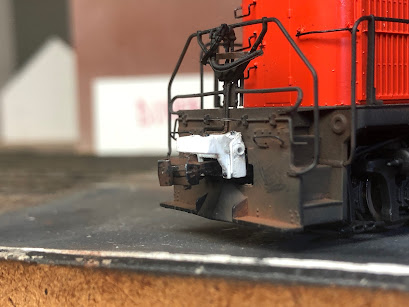 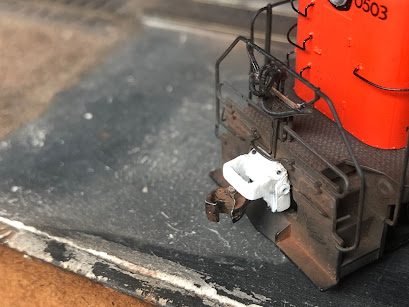 I was happy with that, so I finished the other three. Here are all four, and in the back you can see the (upside down) Custom Finishing part that represents the passenger buffer. 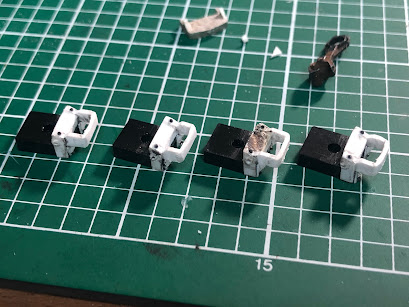 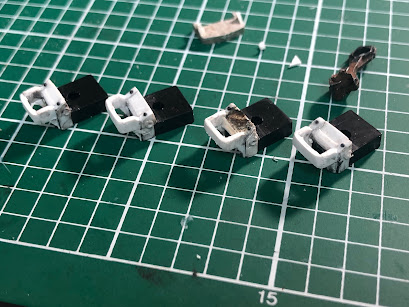 You can see my consistency is not great, but when on the model, painted and weathered they are good enough for me.
I painted/weathered them using a Woodland Scenics Steel Rail paint pen (it really doesn't matter what color, though), and then Pan Pastels to provide the actual color. I did the same thing for the couplers themselves. 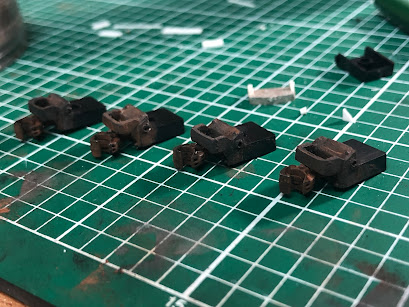 The finished buffers, along with a look at the new Cab Signal box that Jim Lincoln made for me. Jim is selling them for $10 for two, or $20 for five. I'm happy to hook you up with Jim if you'd like some.
The step above the box is Plano diamond tread material, bent to form the step, with three small strips of styrene (which you'll probably never see) as supports. 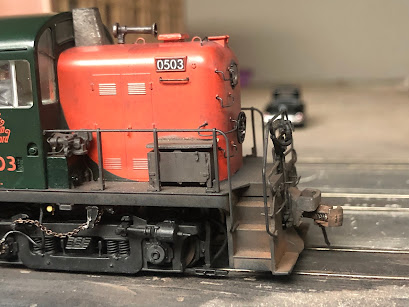 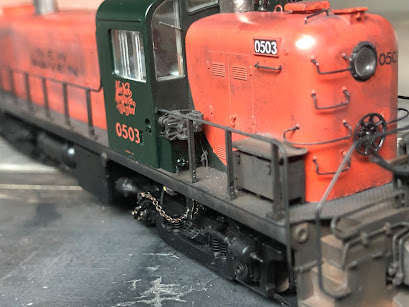 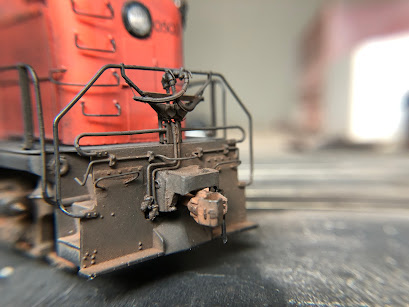 You can see I had to curve the underside of the buffer (and also file the top of the coupler) to get it to swing freely. It would work without that, but not self-center. I'm not sure I could have avoided this, since I couldn't really make the whole buffer taller. It's just a side-effect of things not being exactly to scale, but I don't think it detracts from the model. 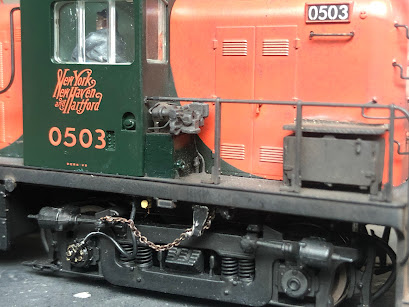 Although hard to see in the photos, I used some of the rubber sprue from the Hi Tech Details air hose set for the air hose piping next to the coupler buffer that goes back under the walkway. I figured having some flexibility would be helpful, and I could easily bend them to glue to the back of the pilot.
Parts Used in this post:
The model is a Life-Like Proto 1000 (now Walthers Proto) RS-2
Jim Lincoln (Contact me for ordering info)