I Did a Thing (No Sacred Cows) 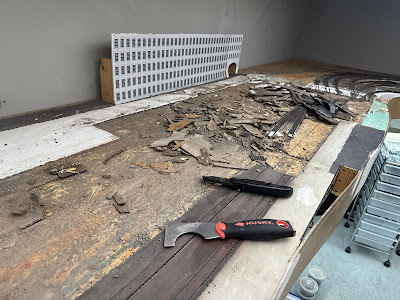 Ever since I had the issue with the white film over the yard (and here), I have been struggling with trying to entirely eliminate it. For the main yard I had simply removed the track and all the ground cover, but I didn't do the main tracks or Track No. 5.

Several months ago, I started cleaning out all of the ballast and most of the ground cover to the section west of Main St. In addition to not taking very long, I was able to address a few other minor issues in the process.

I wasn't entirely happy with how the ground cover, ballast, and track weathering itself. At the time I really liked it, but I've continued to experiment and improve my approach. This is the centerpiece of the layout but wouldn't be up to my current standards. So, I started the process of removing the ground cover and ballast here as well. As I was doing so, it occurred to me that I could do the same thing I did before with the yard tracks, leaving just the main tracks and Track No. 5 to clean.

Not all that much, but it is a slow process. I considered what replacing these tracks would entail but didn't want to go there. But then I damaged a piece of track. Easy enough to fix, but I could also just cut out that section of track and replace it. In fact, I could cut out all of the track, leaving the crossovers and working from them, right?

One of the things that has always worked for me is to plant the seeds of a problem in my brain, and then just go about my regular activities. In a few days, if there's a solution to be had, it will just come to me. In this case there were several other factors that I hadn't considered that really settled the best course of action.

1. I made no allowances for under-table switch actuation. I didn't intend to use it but learned that I need to tie in the main track switches with the signal system. This requires removing the spring from the throwbars, and installing them under existing, ballasted track. Furthermore, at least one is directly over joist.

2. There were some issues with the track arrangement. For example, the location where the crossing shanty sits is much tighter than it should be. Also, as I've learned more, I set the Whiting Street Yard tracks on a prototypical 14' track center. In addition to looking better, it makes enough room to add a missing yard track in New Britain Yard. Correcting the arrangement also moves a switch from Track No. 5 to a side track where it belongs, and properly extends one of the yard tracks across Elm Street. The new arrangement also increases capacity of the yard by about 10 cars.

3. Laying new track would be much faster than cleaning and working with what was there. Furthermore, it feels much more like progress than the slow process of cleaning out the ballast. That also didn't address the issues with the track weathering either. The only delay is that Microengineering turnouts aren't readily available in Code 70 right now. But I've found much of what I need, and the rest is on the way shortly.

4. I can add all of the detail parts to the track at the bench, before installing. I can also switch to using KV models joint bars instead of standard rail joiners, improving the appearance even more.

It also feels like progress. Cleaning out old ballast and "fixing mistakes" feels like a step back. It's often hard to step back and decide that the best option is to "start over" but with over a decade of working on this layout, helping friends on theirs, I've obviously developed new skills, perspectives and goals. 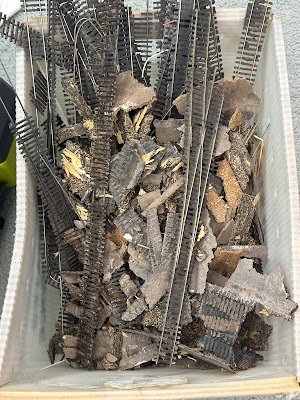 I can confirm that grout does a great job of securing track.

Online there are a lot of folks who have built multiple layouts. My buddy Bill has been rapidly building his new layout. In his case, it was necessity that required the removal of the old layout. Tony Koester tore down the Allegheny Midland because he eventually found it wasn't lining up with his actual goal (even if he didn't realize it initially) of modeling the NKP. Progress comes in many forms, but in the end it really just means one thing - moving closer to the goal.

This seemingly drastic step is definitely achieving that, all while making a number of tasks that would be more challenging and time-consuming if I tried to accomplish them with the existing trackwork. I wouldn't even call it a step backward since it will drastically improve the scene with a decade of things I've learned along the way.