More photos of open-top cars from the collection Dick provided. Prior posts are here, here, here, and here. 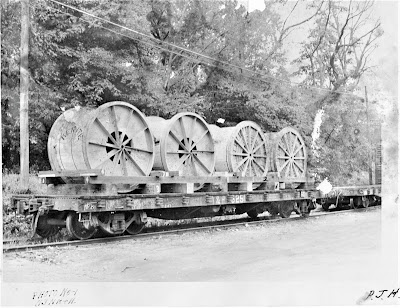 This photo of T&P 5251 says on the back. "Loaded Seymour, Connecticut" with a date of September 15, 1948. The photo says NYNH&H on the front, but no actual location is noted. The back is also stamped Kerite Co, 30 Church St, New York, NY.

A quick search online informs me that the Kerite company manufactured high voltage wire in Seymour, which is located on the Naugatuck Line of the New Haven. 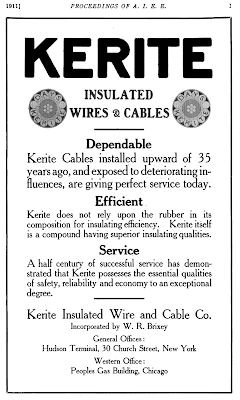 Loading this car to just about anywhere other than towards New England or the east coast would be within the car routing rules. The question is what load did it carry to get to CT?

T&P 5251 was from the 5000-5299 series of 42'6" flat cars. There were still 285 of them in 1950. The cars were built in 1928, and according to Richard Hendrickson in the June, 1993 Railmodel Journal, were delivered with black underframes and freight car red bodies. They were later painted in all freight car red, and most ran into the '60s. The car itself is based on a USRA design that was never built by the USRA. However, there were a number of other cars with the same basic design and dimensions built prior to the USRA design.

Even though the T&P car looks nearly identical to the NC&StL car that the kit is based on, it is a longer car.

These are the cars mentioned in Richard's article. For specific details, check photos, etc. But I've indicated the quantity in revenue service in 1950. These cars were built over a long period, and to similar designs, but they weren't identical. I've noted the differences in length below.

Two additional CP groups have similar dimensions, but I don't know if they are the same basic design. They are not noted in the article:

The Tichy 41-foot (40-foot?) flat car referenced in the article is the best starting place for this car. The kits are easy to build, and also easy to modify. I am working on several different approaches for modeling a 36' New Haven flat car with the kit.

The base kit has 12 stake pockets like the T&P car, but there's also a low-side gondola version that can be built without the sides as a flat car with 10 stake pockets. The sides and ends are easy to replace and, being a flat car, don't have many rivets either.

Prototype Railroad Modeling Volume Four (Speedwitch Media) also has a detailed article by Ted Culotta on building and upgrading the Tichy kit, although it is for NC&StL car, which is the prototype for the kit.

In Richard's article, he notes the modifications he made to the Tichy kit, most of which concern the end sill which was pressed steel instead of the steel channel that is on the model.

Ted's article includes upgrading the model to AB brakes. Note that the location of the components are different on the T&P car than the NC&StL car in his article.

Since it's quite difficult to tell that a given model is 2/8" longer than another when coupled together, it's up to you whether it's worth the effort. But for a T&P or CP modeler, or somebody who wants to work on their kitbashing skills, it's a great model to work with.