I still have time to get one more post in this month...

As most may know, The Amherst Railway Hobby Show in West Springfield was this weekend. The first one in two years, and with a blizzard too, just to make things more interesting. It was also the first year that there were football playoffs in the same weekend. In the past it was always the weekend between the playoff games and the Super Bowl, but with the new longer season that will no longer be the case.

I took some things to sell up on Friday, and we sold quite a few things to the other vendors and workers that were there then. I skipped Saturday during the blizzard (none of Emily's nurses made it to work that day), so went up on Sunday to help Dale and explore the show. I probably ended up doing more exploring and less helping.

Despite a number of last-minute vendor cancellations and a much lower than normal turnout, it was a great show. In some ways better than ever. To start, the folks that did make it Saturday and Sunday were, as most of the vendors reported, there to buy. The casual crowd didn't brave the weather, but the model railroaders that were looking for their usual deals were. I took up my usual small pile of things to sell, 90% of which did and, as planned, that funded my acquisitions. Fewer people also meant it was a lot easier to get around the show, no long lines for vendors, food, parking, or leaving at the end of the show. A decade ago or so this would have felt huge, and with all four buildings still needed to fit all there is to experience, it's way bigger than anything else.

Funny story: Bill Chapin was planning to drive up Friday evening, come over for dinner and to hang out, and then going to the show on Saturday. With the worsening forecast he decided to cancel that plan. When I asked if there was anything he was looking for in particular, he mentioned the True Line Trains Minibox. They were well oversold even with a healthy overrun when Darren and I produced those and even I didn't have any from my era. I had passed them along to customers who had ordered later than the production deadline. I haven't seen any since.

As it turned out, Bill came up Saturday evening, so the weekend activities simply started a day late.

I stopped by ReSourced Rails who mostly sell brass but had some Sunshine kits and other models that came from a collection and wouldn't you know it, they had the TLT Minibox. Eight of them. I bought five, two for me, one for Bill, and a couple that will go to other modeling buddies. Two were in the 1947 "Spans the World" scheme which I wanted (and Bill also took), and the others in the delivery scheme. 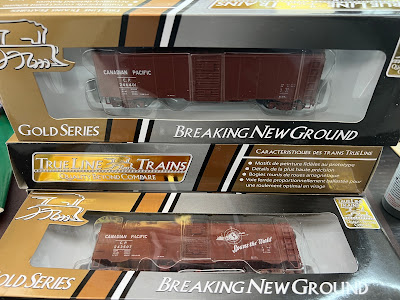 I didn't realize until I got home that they had put a koozie in the bag too: 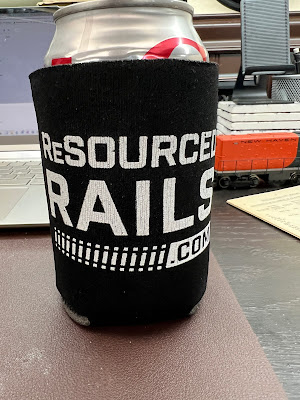 Something I tried to get Darren to do, it's that will sit on my desk and remind me about them frequently. He didn't get it. If I recall, he didn't even know what they were.

I also picked up two DL-109s. One because it had the "correct roof" and the other because it was very cheap and had Tsunami sound already installed. 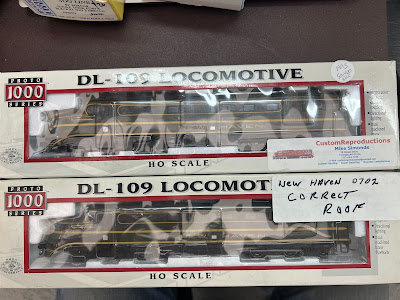 This will give me a passable DER-1 to run now, and I can sell it once I complete redetailing mine. 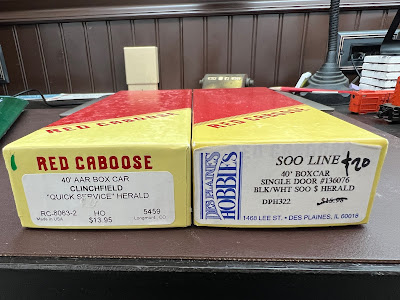 Even if I don't eventually need them, at $5 each it's worth it for the roofs alone.
I was planning on stopping over at Deluxe Materials to get another bottle of Liquid Gravity so I don't have to pay shipping, and Tricky Stick with is a product I want to try. Through some sort of chemical reaction it makes engineering plastics like Delrin bond better with CA. It will be very useful, and one bottle will last a long long time. 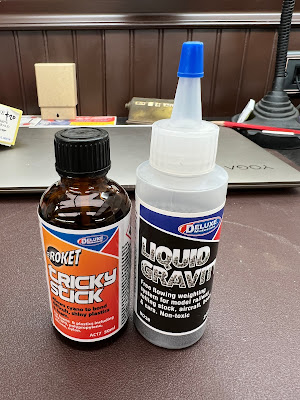 Of course, the other pre-planned visit, and the most important, was over to Spring Creek to pick up a ProtoThrottle: 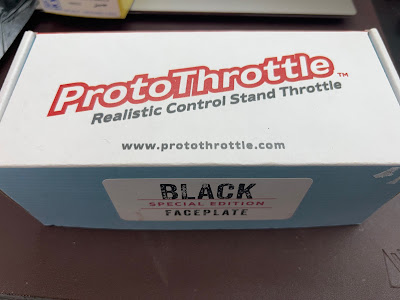 That was the one thing I was getting no matter what. While I do the majority of my shopping from Roger at RR Model and Hobby Supply up the street in Winsted, Spring Creek has been one of my favorite internet sources since I first met them at the Michigan NMRA Show over a decade ago. Wonderful people. They didn't have the receiver on hand at the show, so that will be coming soon and I can get this operating.
Not a bad net zero day - come to the show with no money and come home with stuff. In fact I came home with money too, so even better.
Of the stuff to see there, the most exciting to me is the continued progress on the Bowser RS-3 project. For various reasons this has taken a lot longer to complete than they would have liked, but they look fantastic. No New Haven, yet, but I'll continue to suggest those. Maybe even other closely related locomotives too. Maybe an RS-2?
The other thing I had to see in person was the upcoming BAR/NH insulated box car from Eastern Seaboard Models. The final production samples look incredible, and they should be shipping this summer. It's great to see another company stepping up to manufacture models with this degree of prototypical accuracy and fidelity. Their N-scale products have always been well researched and produced.
Dick, Bill C. and I finished the day at the Student Prince for dinner. Saturday dinner at the Steaming Tender and Sunday at Student Prince are two traditions that I've been involved in and are a big part of the show weekend for me. Although Chris and I cancelled the Steaming Tender dinner (which was just as well with the blizzard), I was happy that I got to the Student Prince, even if it wasn't with the normal crowd. It wouldn't have felt complete without a great meal with great friends.
Posted by Randy at 7:08 PM 2 comments:

Already halfway through January and my first post of the year. Fortunately, Chris has had time for some work on the layout posts on his blog. As things settle down in my schedule I should be able to get back to regular posts too.

So what did I plan last year?

I definitely met my first goal - a post every month. I ended up with way more posts than any prior year, a total of 134. Until October I was very consistent with three posts/week. I'm not sure I'll match that this year, but I think overall a weekly post should be feasible once I get back to regular work on the layout.

I'm also making a lot of progress on the new web page. The deadline was January 22, but it looks like Google has extended it again, until July. In addition to working on the web page, I've been working on a clinic for the RS-2 build, so those have both taken time away from blogging.

On the other hand, I've completed almost nothing of my list itself:

Despite all of the work on the layout last year, and all the blog posts, it seems like I finished almost nothing. Of course, looking through the posts I can see that's not true, but I wasn't very good at staying on task for the things I said I wanted to get done. So I think I need to go through this list again and reprioritize, perhaps.