One topic I see come up frequently online is feeders. My general approach has been the same from the start - I don't want visible feeders, so to me the only option is to solder them to the bottom of the rail. Yes, I've seen people do them to the back of the rail, but that assumes you never take photos where that side of the rail is visible. You also have to be more careful not to create a problem when soldering to the inside of the rail.

As for attaching them to the bus? That's a different story.

Since I've basically re-laid the east and west sides and Berlin Line, and of course have the new Whiting St Yard and staging, I have a lot of feeders to drop again. Chris will be coming over to help with a lot of them, since this approach is tougher for tracks farther from the front of the layout, but it can be done without help.

Feeders to the Rail

First step is to drill 1/8" holes for the feeder wires. I do this so the feeder will come up behind each rail. I have a small piece of Masonite with a larger hole that I drilled that I use to protect the rail so I don't mark it with the drill chuck. I've used my Dremel or a regular drill to drill holes. Either work. In this location the benchwork is 1" foam on top of OSB. 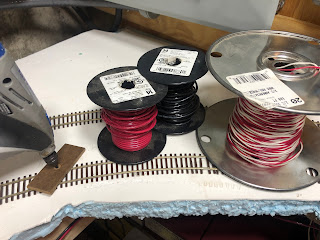 The bus is 14 gauge, and the feeders are 22 gauge bell wire. I would have preferred all the same color, but this was what I could find and as long as red is connected to red I'm good.

I then push lengths of the bell wire through the holes, strip a small amount (maybe 1/4") and bend the tip over. As you may have noticed in other pictures, I've been doing this step around the entire layout, then I'll go back to solder them. 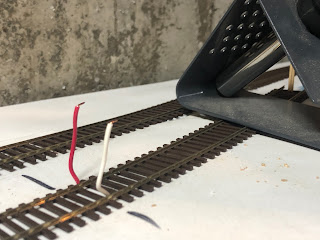 I use a no-clean non-acid flux on the wire and tin the wires with thin, silver bearing solder. Make sure you preheat your iron. I use one of the brass wire cleaning sponge to clean the tip once it's hot, and before I put the iron back in it's stand. 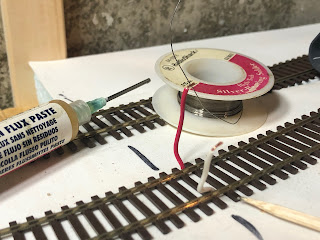 Once the wire is tinned, I apply flux to the tinned wire, then pull the wire down so it is under the rail. This can be a little tricky, which is why you want a very small bend at the end of the wire so you can work it under the rail (this track is already glued down). 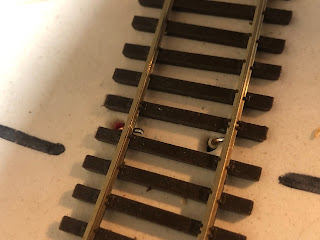 Then you press the wire from underneath with one hand, or if you can't reach that, use tweezers to do it above the deck, and touch the iron to the joint. I usually do it on the back, where the elbow (bend) in the wire is. If needed, I'll touch the iron to the spool of solder to pick up a very small amount of extra solder. I know this isn't the proper way to do it, but it has worked for me.
After I remove the iron, I typically do a slow count to 20 before removing the pressure on the wire, then give it a good tug to see if it's a good connection.
If you felt so inclined, you could file the bottom of the rail, or even tin it before this step. While that makes the soldering super-quick, it makes the process as a whole take longer. Without prepping the bottom of the rail, other than flux, I find it just takes a few extra seconds for the solder to flow.
For feeders farther back, I'll just go under the layout and press the wires to the bottom of the rail while Chris solders them.
I have tried soldering the feeders to the rail then putting the rail down. I found that much harder to do for a variety of reasons so didn't pursue it further.
And that's it. Once ballasted, they are buried and you can't see them at all.

Connecting to the Bus

For the other end, I originally used the 3M Scotchlok 'suitcase connectors' like these: 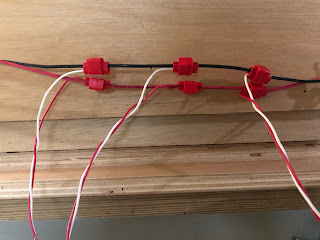 The problem is that if you need to make changes, all you can do is cut the feeder wire. Which led to using this as a pigtail to connect to the feeders themselves using wire nuts: 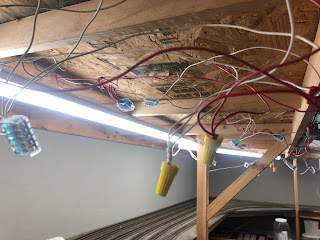 While that works well enough, I found that when you start adding more than a couple of wires to a single nut, it can be a challenge to get them all to connect securely. Also, the more you add, the more difficult it is to remove just one, which means I end up cutting the wires anyway, and redoing the entire nut. There are different sizes for different numbers of wires, but that means you need to have a variety on-hand.
So I tried a different option, which are press-fit connectors that come in multiple sizes (for 2, 3, 4, 5 wires, etc.). Since I was going to cut the wires anyway if I were to remove one, this was a simple solution. You strip the wire, and push it into the connector: 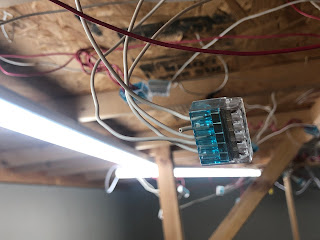 Faster than wire nuts, but I was back to an option that wouldn't allow easy changes. It also requires you to have a variety on hand, or run feeders in a way to maximize their use. Although it's not a bad idea to leave an empty port for future use.
There are versions that have little levers that will let you release a wire, but they were quite a bit more expensive when I picked these up. And I didn't think I was going to change anything anymore...
You can see one wire that was clipped in that photo.

So today I tried another option I just found. T-Tap Connectors. I got mine on eBay, but you can get them elsewhere like Amazon. I tried some electrical warehouses nearby, but they didn't have them. However, it appears they are used primarily in the auto and boat industries, so you may be able to get them at an auto parts store.
In any event, this is what they look like:

Like the suitcase connectors, you hold it to the wire: 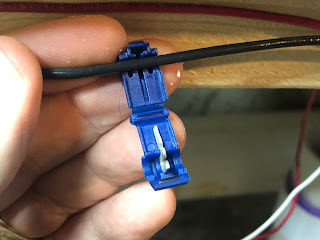 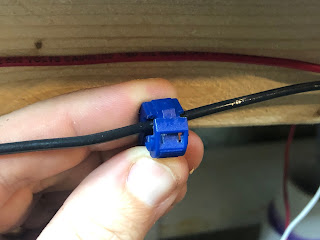 And crimp it shut: 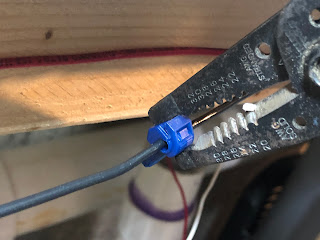 These are much easier to crimp than the suitcase connectors, you can just use your wire stripper. But that only taps into the bus. You then measure, cut and strip the feeder... 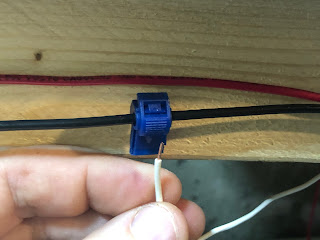 ...and crimp on a male spade connector. You can get the ones that have protection like I did, or without. 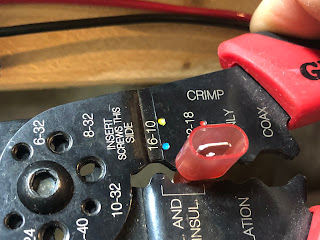 Then it just plugs into the side of the T-Tap Connector: 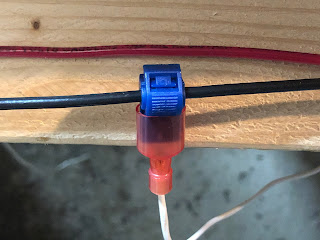 This can be unplugged any time (although it's a very tight fit), and if you need to reuse it, just put a spade on the new wire. Because the spade and T-Tap Connector are separate parts, you just get the sizes of each that fit.
I can't say it's 'better' than the other options, just different. You can still use this as a pigtail if you'd like to go to a group of feeders. But I like the fact that I can disconnect the feeder if I need to (although in theory I won't need to anymore...), and I also like that the feeder comes off perpendicular to the bus, which is a little cleaner than the suitcase connectors, and you can place them closer together if you needed.
I've got 200, so it's what I'm using now (I do really like them), and hopefully that will be the end of feeder hell.

Which leads me to another point, which is asked frequently online - how many do you need?
The answer is...enough that you don't have significant voltage drop anyplace on your layout. I am using the tried-and-true adage of a feeder to (almost) every piece of rail.
The real answer is that a feeder every three feet or so is overkill. But you're also building in redundancy, so if one feeder fails, you won't have to worry about it. You're also trying to compensate for the poorer connectivity of rail joiners, especially over time and after scenicking.
What if you solder your joints? Then you need fewer feeders, but you're also relying on that soldered joint to not fail. In addition, you have to adjust for expansion/contraction differently than if you don't solder joints. Lastly, as I've found out, you may decide to make changes in the future, and that's harder to do if you solder your joints.
Having said that, if I were laying track now, I probably would solder the joints, but not use rail joiners at all, instead using KV Models joint bars to keep the rail aligned when doing so. That would ensure the alignment is consistent, then cut expansion gaps where needed.
What it really comes down to is how much you hate adding feeders vs how hard it is for you to fix future potential issues. I find that it's really not that difficult to fix or add a feeder even after the track has been ballasted. But it is more challenging if your operating crew is waiting for you to do it.
Especially with help, Chris and I have found that we can do a whole lot of feeders in one work session. And doing it now greatly reduces the number of times we have to deal with feeder issues in the future. Now that both of our layouts have been operating in some capacity for a decade or so, I think we'd both say we're happy with our decision to err on the side of too many feeders.
Posted by Randy at 5:37 PM