In a recent discussion on the NHRHTA Forum, I remembered a video I had seen a while ago that was relevant to the discussion. Of course, I couldn't remember the name of the video. I realized I hadn't collected those links here, which would have made it easier to find...

So here's some fun things to watch. 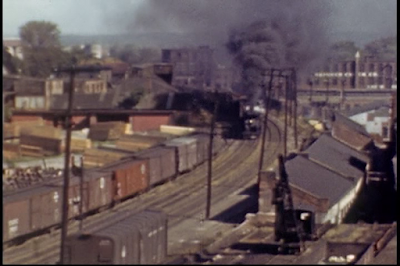 Capture of a video by Paul Wales, since released by A&R Productions
(Preview linked below)

Others (including better quality versions of a couple of these) are available from NHRHTA here.

New Haven Railroad: A Great Railroad at Work - A classic and comprehensive promotional film made in the early '40s about the railroad.

Memories of Steam in New England - as you might expect, it covers other New England roads as well.

NH2 Clip - Preview of A&R Productions New Haven Railroad Volume 2 video featuring color films taken by Paul Wales, including some taken in New Britain in the 1940s and '50s. We had a preview of these films at my house before A&R received them to produce their DVD.

16mm Silent Films - Later than my era for the most part, but still interesting.

NHRR and LIRR - Also later than my era.

NHRR Around Providence and Boston - also McGinnis era and later.

When Steam was King - Another color film, only the first train is New Haven. It's a baggage/mail train, and was relevant to the discussion. But since it was also the only New Haven train in the film, I hadn't remembered what it was called.

I'm sure there are some I missed, and there might be a duplicate or two in the list above. A Great Railroad at Work shows up frequently on YouTube under different titles.

The Greg Scholl and A&R Productions videos are available from many online (and train show) resources, so I didn't link any specific ones. I highly recommend New Haven Railroad Volume 2 by A&R of course, since it has a whole bunch of Highland/New Britain shots.

NHRHTA used to have a video containing Kent Cochrane videos. I have an extended cut of that, and hopefully NHRHTA will be releasing that in the future since it also features the Highland line and a little of New Britain.