There's a thread on the Steam Era Freight Car Group about a composite gondola that looks a lot like the one in this picture. I've been trying to determine the road on this car because I'd like to model it myself. It looks like the Intermountain USRA composite gondola would be a good starting point. We'll see what the experts on the site determine. 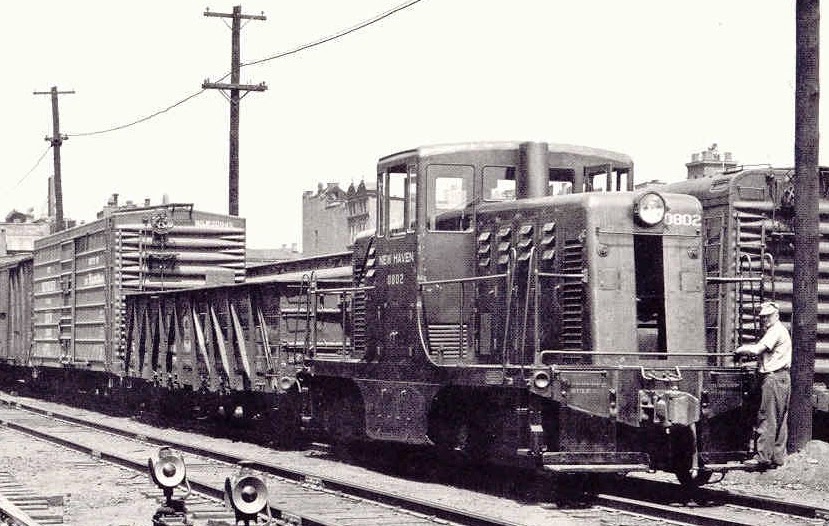 New Britain Yard 1949.
I forget the photographer, it was from a NHRHTA calendar - one of the few I don't have!

Here's a couple of things I've been meaning to send to the Thursday night guys but decided I might as well share them here for everybody.

More USRA Hopper Info
First is an interesting document from the B&O railroad about rebuilding their hoppers:

It's a nice companion to a similar book that Pieter has about CNJ/CRP hopper rebuilds.

It's of particular interest now because I'm trying to determine which roads still had USRA hoppers with K-brakes c1947 since the MTH hopper can be used as is for those. So apparently the B&O upgraded theirs to AB brakes, with a horizontal handbrake. I don't see any USRA hoppers (B&O Class N-17) in the pictures but you can see a reweigh date of 1945 on one of them that gives a rough idea of when the rebuilding project was underway.

So, the question is, how many of the USRA hoppers were rebuilt by 1947, and were any still using K-brakes at that time. According to the rosters in B&O modeler Vol 2, No 3  there were 1,853 N-17's in 1948, and 1,764 of them still in service in 1954, the year after K-brakes were outlawed in interchange service. While roads could retain K-brakes for online service only, these numbers were reported in the ORER so they would have been upgraded.

That still doesn't tell me when they were upgraded, but it's a safe bet that the majority of the cars were in the upgrade program. So I'll most likely want to upgrade them to AB Brakes.

The RDG also upgraded theirs, although the confirmed upgrades so far were photographed post '54.

NYC Railroading
I mentioned this site to the guys a while ago and never got around to sending it to them. It's an excellent site on the terminal railroads of NYC. I came across the site because of Dave Ramos's New York Harbor Railroad.

Joseph was also checking it out because one of the things he's thought about modeling is street running and there was a bit in NYC in Brooklyn (which we went to check out on the way to Dave's).