Yes, I got sidetracked again...

When cleaning up I put my freight cars into a rolling cart for storage. To make finding cars easier, I grouped them by prototype, and one drawer is 1932 ARA Standard box cars. Naturally I have more of these than I actually need, since it's readily available as a plastic RTR model produced by Atlas. Information is also easy to come by in the form a very thorough and fascinating book by my friend Ted Culotta of Speedwitch Media, The American Railway Association Standard Box Car of 1932.

While these models have been out for quite a while, I haven't seen the info compiled on one place.

In my notes from prior to the initial release, I thought they intended to release ten different body styles. To date they have released seven. In the book, I had noted which prototype matched the different body types, but as I go through that again I find that my notes don't match the actual releases so far. I had compiled the info from a number of (now forgotten) sources when the models were first announced. I am skeptical that three more variations are in the works at this point.

The models themselves are well done and they clearly designed the project to cover as many of the prototypes as they could accurately. Here are the seven body types. 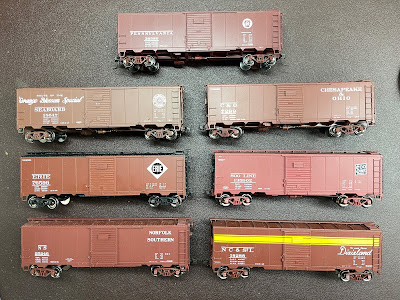 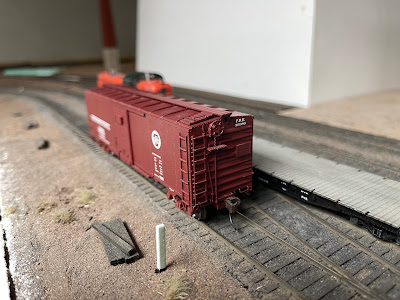 The body type refers to three primary variables. The side sill, the roof, and the ends.
The "long tab" body refers to the reinforcing channel along the side sill. On the five prototypes, plus the C&O, ERIE, and NKP cars, the channel reinforcement of the side sill under the door was shorter than the later production cars. Differentiating between these two styles is a nice touch. 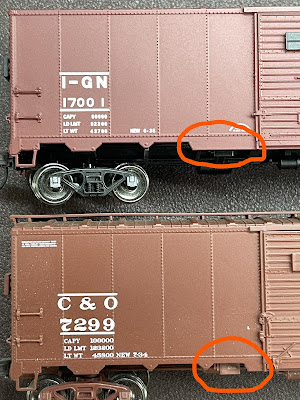 The major components (ends and roof) are correct for these cars. I'll get into the smaller details in a moment.

This was the most common style of this prototype, covering the following roads as built:

There are also additional cars that can be modeled with this body type with some additional parts.
This group of cars used Duryea Cushioned underframes. Speedwitch Media makes the 1936-1937 style Duryea Underframe that would be appropriate for these cars.
These cars utilized Union Duplex door hardware, available as a minikit from National Scale Car Co. including doors, door tracks, and decals. The kit also covers M-I 4000-4249 (250), but these cars had W-corner ("round corner") 4/4 Dreadnaught ends, so is not an exact match.

The first group of these also used a Duryea cushioned underframe. The second group had W-corner 4/4 Dreadnaught ends and Duryea underframes. While the Speedwitch underframe would be appropriate for the first group, I don't know what the differences were for the 1939 or 1942 built cars. National Scale Car Co.  has a Z26 version as part of their Rock Island and CMO mini kits that is good at least for 1944-45, but I don't see it listed as a separately available part right now.

A note about underframes: I separate out the cars with Duryea underframes because they have features that can be seen at the end of the car, and also under the car in profile (even in shadow). There were some other more minor differences in the underframes that could be modeled for several other cars.

The first 550 of the C&O cars, and all of the Erie and NKP cars had the older ARA center sill, due to lack of availability of the new center sill components when built. This isn't noticeable unless you turn the car over. In addition, the L&A, NC&StL, Seaboard, and WRT cars had a truck center spacing of 6-1/4" wider than the other cars. This means the outer edge of the bolster is in line with the rivet seam between the outer side panels, instead of just inside it (about 7/100ths of an inch in HO). 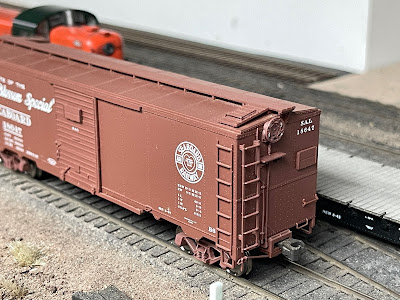 There's an excellent article on upgrading the Seaboard model in the Seaboard-Coast Line Modeler V3.1 (Q1, 2009). 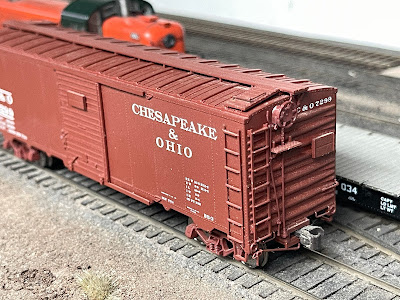 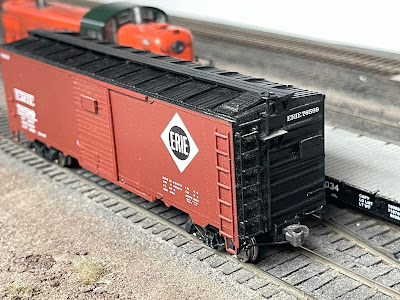 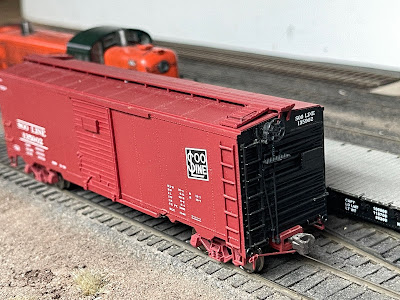 This is the only major compromise in the models, although they do have at least one outright foobie as well. The general components are correct, but they opted to tool only a single flat panel roof. The 11-panel roof was used L&A, Seaboard, and WRT cars, and the tooling is correct for that. But the SOO cars, along with CGW, and NdeM cars had a 12-panel flat riveted roof.
I can understand the decision, though. It shouldn't be too difficult to sand down the rivet lines and add new ones with Archer rivet decals. 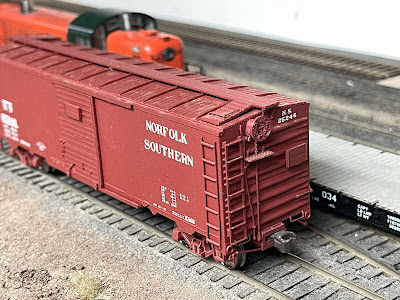 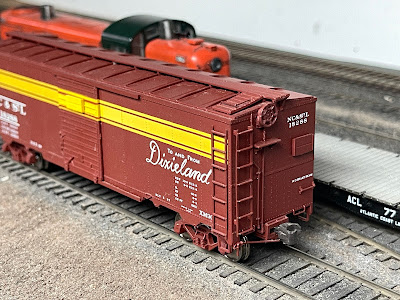 I was pleasantly surprised at the number of variations offered, considering a number of them were for a single road. Yes, the molds are designed to be interchangeable, but it still increases the cost of the project. To date, though, there are a still a number of cars not covered by these variations which will be more difficult to model. I've already noted the M-I and WM cars that had W-corner Dreadnaught ends.

The most interesting one, perhaps, (and my old notes indicated they may have been body types 8 and 9) is the Bangor & Aroostook. The initial order of 500 was built for newsprint service, and had thicker floors than the standard car. This affected the interior height, but not the external characteristics of the car. But they opted for 4/5 Dreadnaught ends instead of the 4/4 style used on all of the other 1932 ARA Standard cars that used these ends. The second two groups of cars were the last 1932 ARA Standard box cars built, in February and December 1945. The first 50 were similar to their other cars, but the final 100 used the (then) new 3/4 Improved Dreadnaught Ends. So modeling either of these with the existing Atlas model will require replacing the ends.

Fortunately, F&C have a resin kit for the first 550 cars.

Another unique variation. Like the SOO cars, these used a 12-panel flat riveted roof. But the biggest difference was the 7/8 Murphy ends (was this the last application of these ends?). They also had a unique door only used by these two groups. Initially, I thought this would be Type 10. But Atlas has released Type 5 models lettered for the NdeM, so I'm taking that as a sign they are not planning on it. This, unfortunately, is a true foobie. But since NdeM cars are rare, I guess they figured it was a valid scheme for the prototype as a whole.

Like the 1937 AAR Standard Box Car, Canadian Pacific had their own unique variation of these cars as well. It's interesting that they built these, in part because the side sill design for their "Minibox" cars is seen as probably a direct influence on the 1932 ARA Standard car.  In any event, their version used 4/5 Dreadnaught ends, and a Murphy Radial roof. The Murphy roof has only one stiffening corrugation in the center of each panel instead of the two that the Hutchins Radial roof used. So trying to start with a Type 3 body requires more than just replacing the ends.

F&C also makes a resin kit for the CP cars.

Built in 1937, it used 4/5 Dreadnaught ends like the B&A and CP cars. But what makes these unique is the early use of welded construction. The first group of 10 was almost entirely welded, including the side sheets, underframe and ends. The last 90 had a few more points where rivets were utilized, but still had welded sides and ends. So not the easiest variation to kitbash. With its welded sides, this would be a good choice for Pierre at Yarmouth Model Works, since he has mastered creating the oil canning effect.

Overall I'm very pleased with the quality of the casting of the Atlas cars. For example, while nobody makes bracket grabs as well as Kadee, these are on par with other injection molded models. They also took the effort to tool two door variations to account for the most common door hardware used. This includes the Camel Roller Lift and Creco Ball-Bearing styles. Along with the doors available as a minikit from National Scale Car Co with Union Duplex hardware, you can have the correct options for any of the styles Atlas produced.

They tooled at least 5 different brake wheels. I don't have a CRR model, which should have a Klasing brake wheel. However, I don't remember anybody indicating Atlas had done a Klasing brake wheel prior to the one we produced at True Line Trains. Since those aren't available now either, you'll have to go with the Resin Car Works/Shapeways one, or wait for rumored one from Kadee. 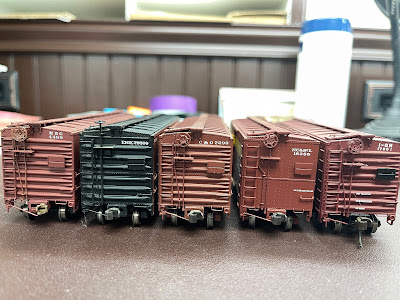 Ajax, ARA "Plate B" (aka "stemwinder"), Miner, Miner (early), Universal
Yes, the NC&StL was the only group of 1932 ARA Standard cars to receive the early Miner D-3290 brake wheel with holes in the center portion. I do not know what other prototypes used this brake wheel.
While there are better rendered versions of many of these, I give Atlas credit for making this many, especially the rather rare NC&StL variation. Aside from the Klasing brake wheel used on the Clinchfield cars, the only other brake wheels used on these cars were Equipco on some CP and NdeM cars, Peacock on some CP cars, and Ureco on some WRT cars.
The C&O, ERIE, NKP and SOO cars were delivered with horizontal brake wheels with gearing at the bottom of the staff. The ERIE car pictured above has it, but my C&O and NKP models have Miner powered handbrakes and the SOO has the Miner hand brake with holes instead. The gearing detail is not rendered at all on the bottom of the staff, but could easily be added. Clearly some cars received powered handbrakes later on, so work from photos.

Other Details and Comments 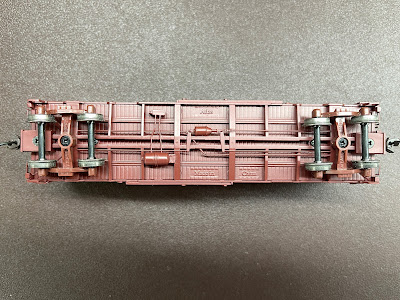 The paint schemes themselves look pretty accurate. I haven't gone through them in great detail, if for no other reason than I'm unlikely to change it since these are RTR. As I get to final detailing and weathering each car, then I'll see if there are any glaring issues. But the variations in box car brown/red is nice, the lettering is crisp and well applied as I would expect from any RTR model today. They have released several roads in multiple schemes as well.
They are an important prototype but were, overall, a small portion of most rosters and the national box car fleet. I haven't taken the time to determine what percentage these cars make up for a given road. Instead, they will be generally lumped into a "rare" category when operating. That is, there probably won't be more than one or two 1932 ARA Standard car on the layout at a given time. I would
Posted by Randy at 6:13 PM