The fine details were basically done. I added a crew from a Proto S-2 and painted the interior in an attempt to get 'Boat Enamel Green' which is one of the colors that was specified for the interior of the NE-5 cabooses and I assumed is sort of a gray-green that I've seen inside some locomotives. I think it came out a bit too mint-green, but it's good enough. I covered the wires that go through the cab with a piece of styrene, and also capped off the top half of the ends of the shell to make the front and back cab walls. This was simple since the long and short hood are separate parts.

So with the last few details added, it was time to weather the shell itself. And while I was quite happy with the way the walkway and underframe weathering went, the rest was a different matter.

I followed the same process as the underframe, which was basically just a dusting of Pan Pastels. Unfortunately, it was too heavy in some areas, and non-existent in others. One of the problem areas was that anyplace I had touched up paint, or parts I had added and painted, weathered completely differently than the rest of the shell. 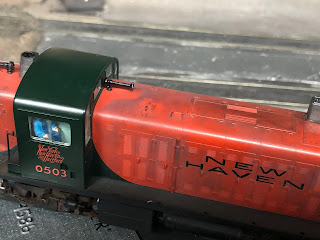 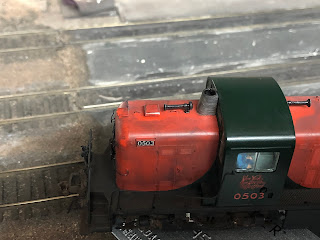 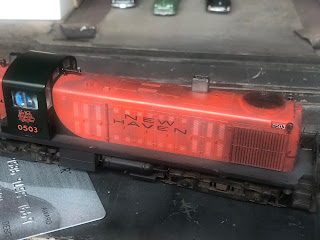 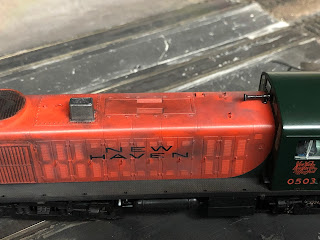 Since I wasn't happy with the results, and not sure how to proceed I set them aside while working on other things. In the end, I washed the weathering off. It's odd how they seem to disappear on the chassis, but were so hard to clean off the shell... In the end, a fingertip worked better than a toothbrush.

This time I did a wash using Vallejo paints, basically a reddish brown to highlight the crevices, around the doors, the louvres, etc.

I then dusted it with Vallejo pigments, using a light beige to simulate a light coating of dust. In and around the stack and the radiator fan housing I used black Pan Pastels, and also in the radiator shutters. 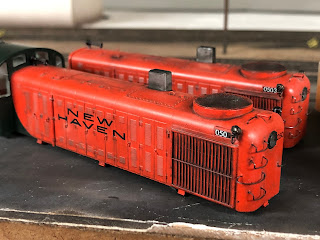 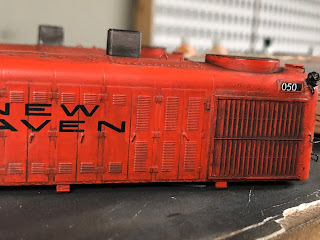 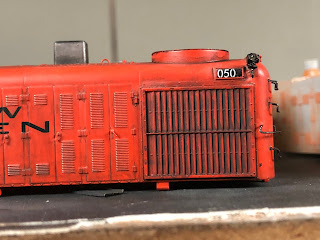 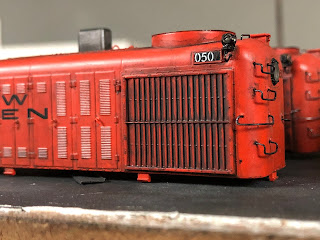 I didn't like how heavy it was in the shutters, though, so I washed most of that off.

I found weathering the cab more difficult. The wash puddled in weird patterns on the broad, flat areas so I wiped it off. But it also was not very visible on the dark green. It's a bit early in their life for a heavy covering of soot and dirt on the roof, so I didn't want to overdo it. So the light dusting seems to be good for now.

While overall I'm happy with the weathering, it's not quite what I was going for. It's heavier than I'd like, although at this stage much more difficult to alter. I think it looks more appropriate for their appearance in 1960 than 1950. 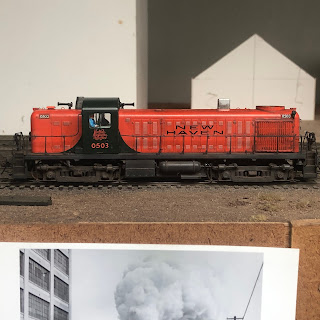 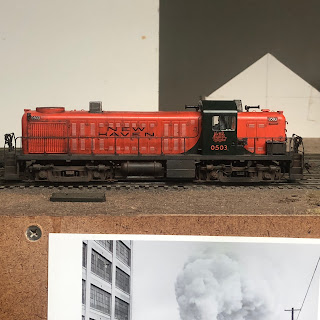 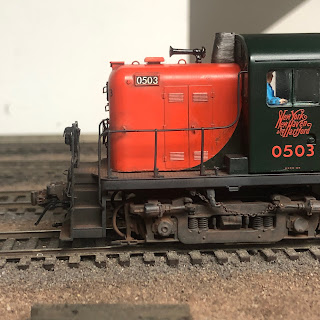 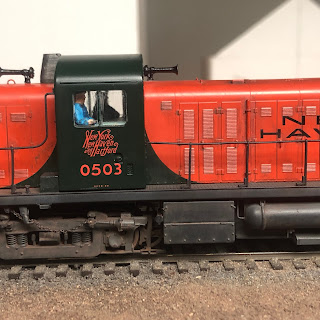 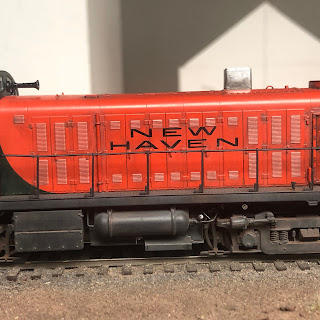 The small pipe right next to the radiator shutters (on both sides) is simply a piece of styrene rod, painted and weathered before gluing it in place. I made it long, then cut/filed to be flush with the bottom of the shell. 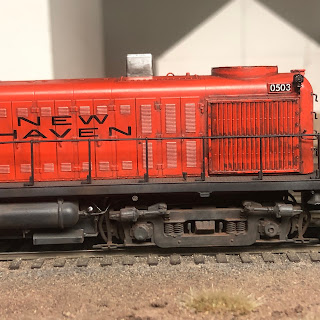 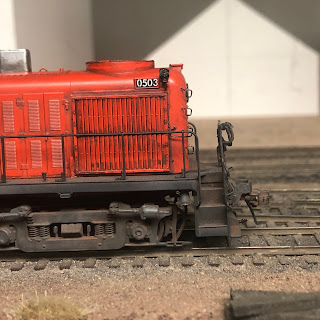 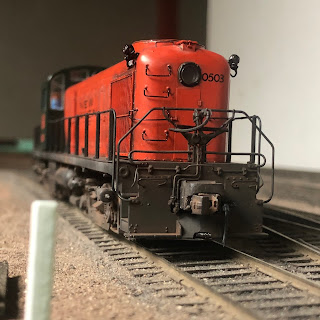 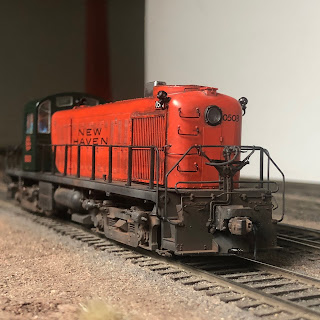 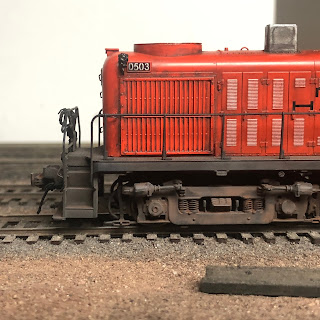 Based on the photos, I cut the hose off of the signal line leaving just the angle cock, since it looks like they removed it sometimes when using the locomotives in freight service. I've left the hose on 0502 for a different variation. 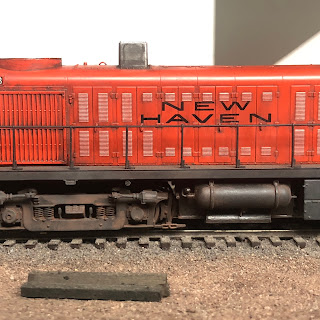 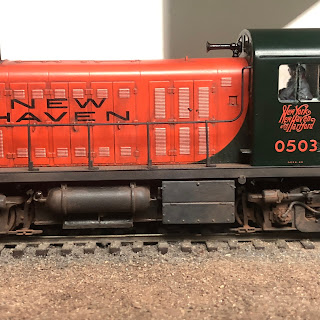 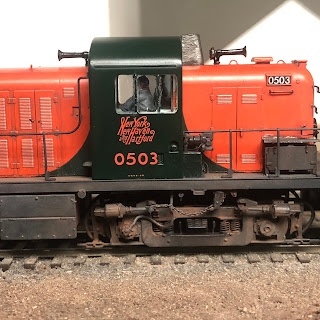 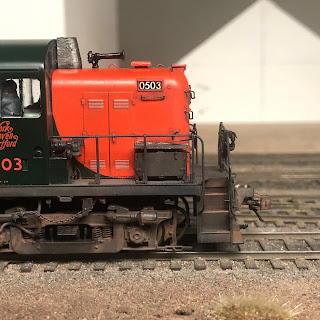 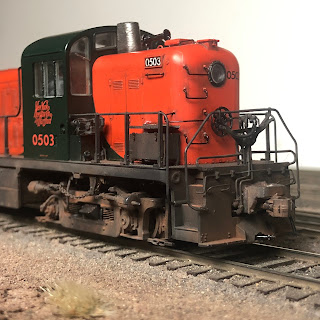 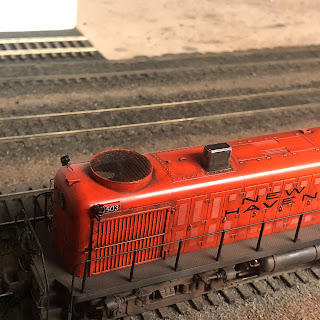 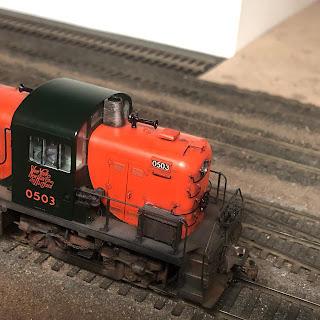 I had removed the wheels and masked off the axle holes when I sprayed the entire chassis with Rustoleum black primer. While they were out, I weathered the wheels using my usual approach of a paint pen then applying Pan Pastels to the wet paint.
There are a few minor details I might add, and I need to get my Microscale decals back from a friend to add the, 'Observe Rule 92,' lettering to the pilots. I find the picking up the locomotives by the shell works best to preserve the weathering, but ultimately I intend to leave them on the track.
The weathering from the walkway down is easy, and I actually like the idea that I'll touch that up every once in a while, so it will change over time. For 0502 I think I'll glue the shell to the walkway. I'll eventually do this one too, but I'm not ready to take it apart right now. But there are a few spots that aren't as tight as I'd like.
I need to finish up 0502, but the Thursday project this week is a bit more substantial. More on that next time!
Posted by Randy at 10:42 AM