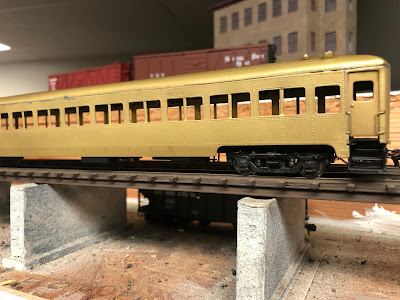 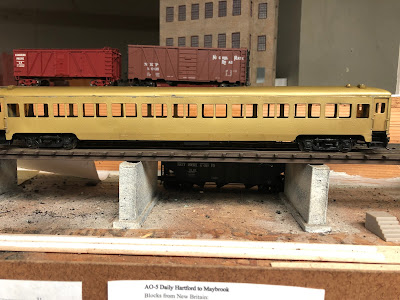 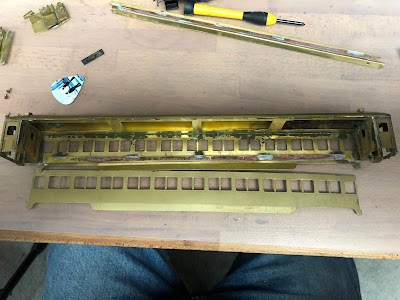 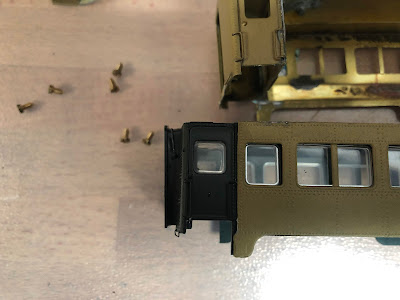 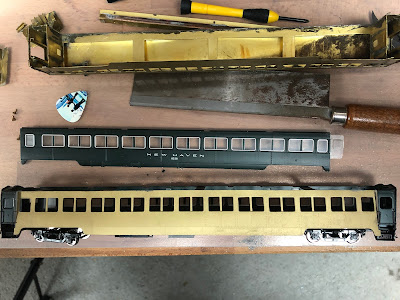 And of course, once I get these together, Rapido will be free to release their 11-window models for me to replace them with.
Posted by Randy at 12:24 AM 4 comments:

Among my more exciting recent acquisitions is additional paperwork for operating the layout. More importantly, it also answers some lingering questions...

First up, I finally found an actual New Haven Railroad Switchlist. It's too big for my scanner, so it's at Chris' waiting to be scanned. I already knew what they looked like (and the form number) because there was a picture of the "old" one in a booklet about the installation of an IBM computer system c1947 (available here thanks to John C. Carlton).

But what I found after that was a form that I didn't know existed: 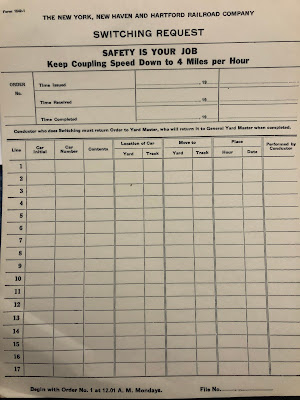 This is a switchlist for yard crews and is the primary form that the agent/yardmaster will be creating for the switching crews. Especially since it's now clear that Stanley Works, for example, will request switching moves several times a session.

Note the "Order No." field, with instructions at the bottom. These are generated sequentially through the week, as needed. It identifies where the car is located, where it will go, and the conductor needs to complete the placement time when complete.

Based on what I'm learning from Dale over at the CNZR and Joseph at the Pioneer Valley Railroad, there will be priority switching orders (such as perishables, the freight house, and industries like Stanley Works), and regular switching orders. I don't see anything on the form to indicate this, so it will probably be something more informal.

In the meantime, time to get working on the infrastructure so I can get back to operating.

Wow, my last post was over a month ago. I've been trying to keep that from happening...

So, after the prototype meet I ripped up the entire west end of the layout to relay. Chris and John (Drake) have been helping out, and in the process I have been able to much more closely model the actual track arrangement. 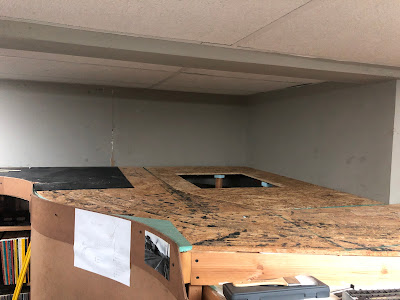 This is where Stanley Works used to be. The initial goal was to fill in some space to allow more room for buildings behind the trackwork itself. As you can see, we left a hole open for access, and also to make it easier for anybody who needs to access the helix. At least, that was the theory.... 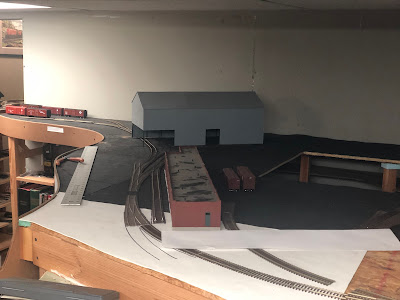 In the original (well, second or third original arrangement), the rolling mill was flush against the wall, and the tracks stub-ended, with additional tracks going to the shelf beside it. This was a compromise because I didn't think I could actually run the tracks through it like the prototype. The white piece of paper is a template I'm using for roads to see if I might actually be able to fit Curtis Street.

In the process, I drove around the plant again and realized how much of a hill there is: 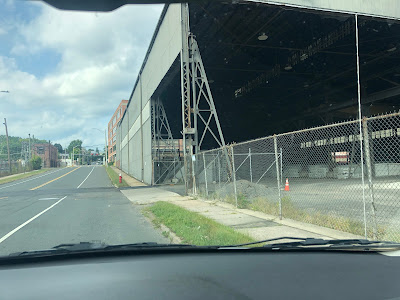 This is where the track passes through the rolling mill over Burritt St., and there's a pretty significant grade. 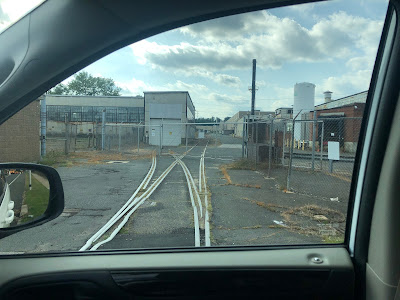 This is the track on the other side of Burritt St. and a look at the building where one track goes inside. That's the same building that was there in my era. What's even more interesting to me, though, is how they've used rail for maintaining the flangeways in the switch, even around the points. Something I intend to model. 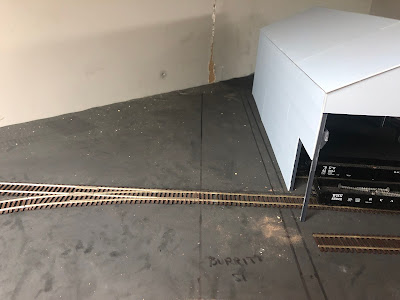 Instead of the rolling mill being against the wall, I found I'm able to angle it to allow me to model Burritt St. (which will be on a hill) going into the tracks across the street. The switch will be encased in asphalt. 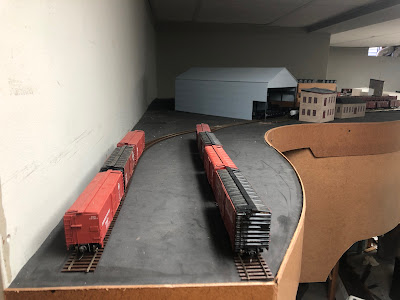 While the arrangement past Burritt St. won't be exact, this has the track in the building (on the right), and one against another building, with pavement between them, as on the prototoype. In later years a track running alongside the building on the right would lead to additional buildings. But the best I can tell, these weren't in place in my era. In any event, they won't fit. 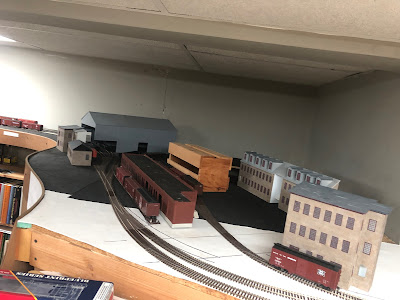 While the arrangement may not appear to be that different through here, it is operationally. The box is a stand-in for a building right now, as are all of the buildings except the rolling mill. On the prototype, there are two low buildings, with the two sidings between them as there is now on the model. Then there is an open paved area between the second building and the main Stanley Works building, with pipes connecting them. The main building is on a hill, so the side facing Myrtle St. is a full story above this side. I'll be building the hill , and the building will dominate the back of the scene, well above eye level, and all of the structures along that back portion will end up covering the hole we left above the helix. So much for the access! But it will look amazing, and is just buildings. 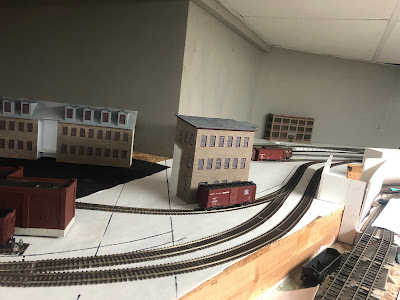 This is a look up Curtis St. There will be trucks at the end of the building on the left, and to the right will be the Power Plant (and I'll be shortening the coal tracks there). Curtis St. will go up a pretty steep grade just past the siding, all the way to the corner of the wall. The corner itself will be fairly well hidden by structures. Note that in addition to the box car to the right of Curtis St., based on photos there will be additional spotting locations to the right of that turnout. Which essentially eliminates the runaround and greatly alters operations.

The small Fafnir Bearings building (from Ed O'Keefe who was once modeling New Britain and recently passed away), is a stand-in for the much larger building that will be there eventually.

Operationally, I'm still working out the details. There are about 30 spotting locations in Stanley Works alone, not including the coal tracks, and unlike my prior arrangements, is entirely prototypical, if compressed. Without any real storage tracks, they will need to rely on the NH switchers to clear space and bring new cars throughout the day. I've got a better understanding about that process now due to some new finds, but that's for a later post...