I just received the Eastern Seaboard Models Magor/PC&F XIH box cars. For those unfamiliar with the company, this is their first HO scale offering, after years of excellent N-scale products.

Bryan has been posting updates, photos, and videos on a regular basis which highlighted testing and various rejections (including just as they were about to ship) to ensure these models were up to their standards.

I haven't done any significant research on the prototype since the NH version was built mid-1953 and just sneaks into my modeling era. But these are actually two closely related prototypes, 300 cars built for BAR by Magor in 1950, and another 150 cars (plus 100 for the NH) built by PC&F. 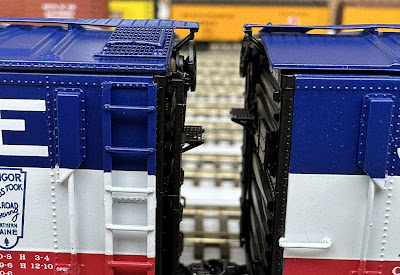 The PC&F cars (right) used a different roof than the Magor-built cars (left).
The cars are beautifully finished with the ever-popular (even on incorrect prototypes) "State of Maine" scheme. There has always been a lot of debate about the scheme, particularly the ends. Although the ends were painted the same color as the roof and top third of the car sides, it was mixed with asphaltum making them look black. I prefer this choice as it better matches photos of the cars.
I'm sure some will complain about the price, but I'm surprised it's as low as it is. It's their first foray into HO scale, and the amount of testing and changes alone add to the cost. But they also have genuine Kadee couplers, Intermountain trucks and wheelsets, and Hi-Tech rubber air hoses. Although OEM prices are less than what we as consumers pay, it does increase the cost of producing the product.
The main reason I'm posting this now (aside from them arriving today) is that Eastern Seaboard Models is they will be in the Mallary building (section 127) at the Amherst Railroad Hobby Show at West Springfield this weekend. If you didn't order the cars, go check them out in person. I doubt whatever is left will last long. I got mine through NHRHTA and I don't see them listed on the site there at all.
Posted by Randy at 10:26 PM No comments: 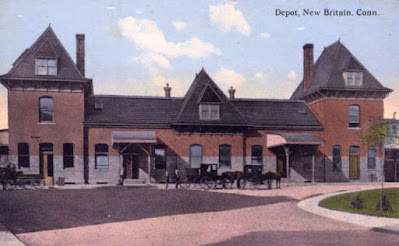 Hand-colored postcard of New Britain Station.
On November 2, 2007 I first published New Britain Station. At the time I was still planning my layout.
I posted about the basic concept of the design, with a helix at either end, in March of the following year.
It wasn't until almost a year later that I had removed the old layout to prepare construction for the New Britain layout.
In 2011, I had to move the website due to technical issues. Quoting guitarist Robert Fripp, "turn a seeming disadvantage to an advantage," and I took the opportunity to completely redesign the site. In 2014, again due to some technical changes, I switched the blog to be hosted at Blogger. It is more robust and added the ability for readers to comment on my posts.
Today I'm launching New Britain Station 3.0. The old Google Sites is being retired, but the deadline was (fortunately) pushed back several times. Which again allowed me to not just transfer it but redesign it entirely. I've updated and rewritten every page and added loads of photos. Although quite time consuming, I have learned so much more since 2011, it really needed a proper refresh. Hopefully for the last time. The blog will continue without any changes.

The photo at the top of the page is from a postcard produced for F.W. Woolworth Co. and is one I have used as the main photo on the site. Like most postcards, there's no copyright date but the one I have was postmarked in 1913. As it turns out, New Britain Station was a popular subject for postcards. I have found nine different ones to date - here they are: 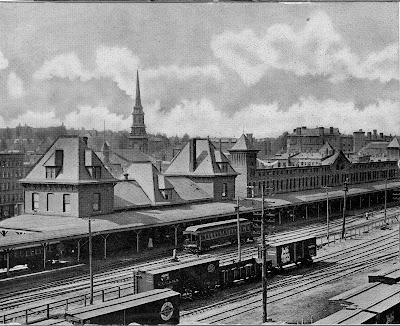 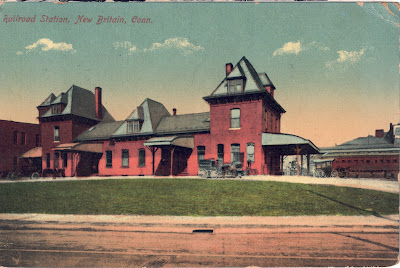 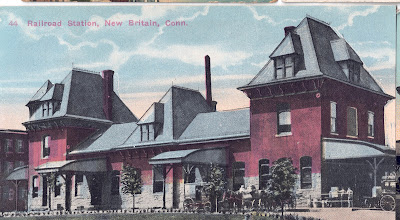 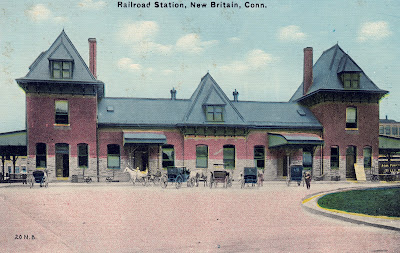 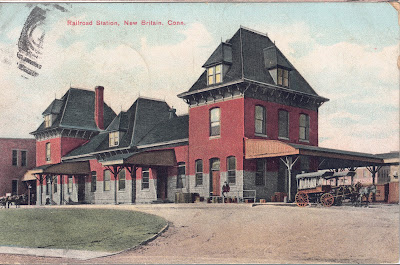 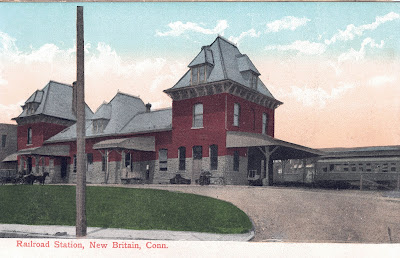 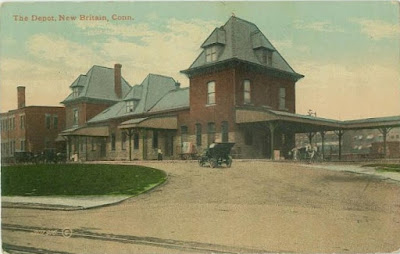 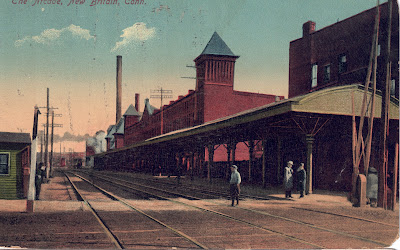 August Schmeltzer Co., Meriden, Conn. Made in Germany.
Posted by Randy at 12:52 AM No comments:

As I'm wrapping up the final few pages on the new website (for now) I was looking more closely at this photo of a J-1 (3019?) in Whiting Street Yard. I think this is a Kent Cochrane photo from c1940, but the window of time based on other elements in this, and another photo, is post-1936, pre-1945.

Is that a PRR X24 with horizontal sheathing and Youngstown doors?

The lettering in the upper left is "Autom/obiles"

Somebody was looking for some baggage car kits, so I was looking through photos to identify the classes of baggage cars I'd need (and what I could spare) and came across something rather interesting. I also needed to finish the updating the page on the new website for passenger equipment, which led to more digging, and yet another interesting find. The result? A post on baggage cars.

Photos seem to confirm that all of the Highland Line passenger trains were assigned Steel Underframe Baggage Cars from the 3800-3946 series of cars. Like Pete Puma, I'll need three or four of them. 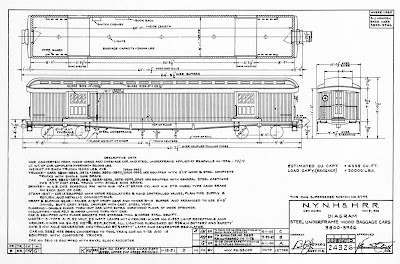 The next question is whether I need any steel baggage cars, and which ones. I knew that they showed up in several of the photos at the station. Each day there's a baggage car that is spotted at the station to bring storage mail to Hartford in the evening. I'm 99% sure that these would be 60' steel cars from the 5300-5404 series, and not the longer 70' cars since Train No. 472 is assigned 60' of storage mail.
Can I identify if they are the steel underframe vs steel cars? For example, in one of several Kent Cochrane photos, shere's I-2 No. 1300 at the station. To the left you can see the end of the baggage car. 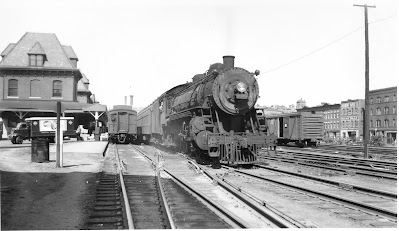 If you note, the end rails are a simple right angle. That's the arrangement on the 3800-series of cars. Here's I-1 No. 1007 at the station and you can clearly see that the train has a wooden baggage car. 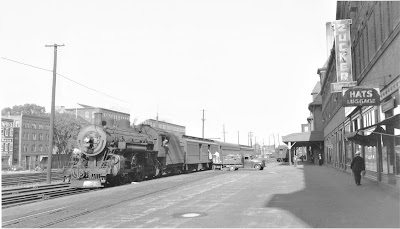 But at the station is another baggage car. If I zoom in, we can see that it has an upper right handrail at about a 45-degree angle. 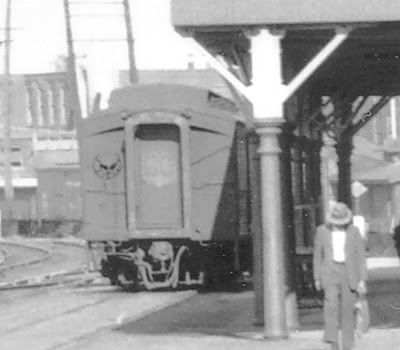 That's a signature feature of the Osgood-Bradley built steel baggage cars. It won't tell us the length of the car, but since it's only assigned 60' of storage mail, I'm comfortable with that. Are they common? But then things get more interesting...
Three photos show alternate angles of baggage cars at the station. First is this baggage car behind DEY-4 No. 0803. You can see a belt line, so it's a steel car (I have commented in the past that I thought it was wood). What I find more interesting is that it's in the yard. That leads me to believe these were probably brought to New Britain by a freight train. 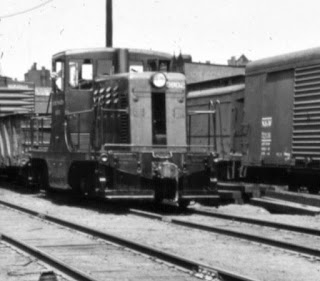 The second photo taken by Jim Karl on the 1949 day is moments later. Ted Culotta noticed the clerestory roof behind No. 0802, and I found the photo above later. 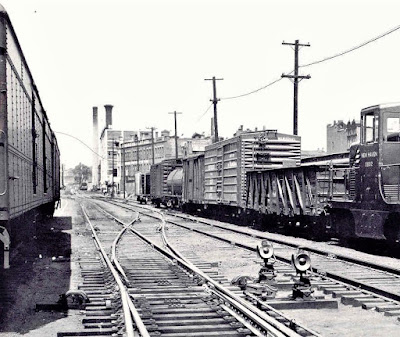 But wait, looking at the spacing between the Ward ventilators, there are six "windows" between them. A photo of in the Bob Liljestrand book shows that the 60' car have only four. Is that a 70' car?
The F&C model, and the prototype photo on their site shows the 70' car also has only four. But here are two photos (the second is of No. 5532) that show some of them had different spacings. 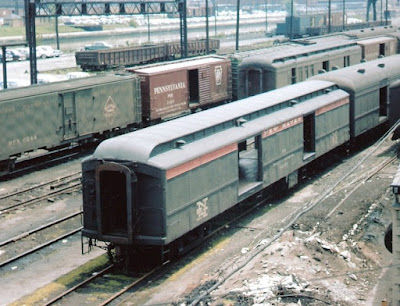 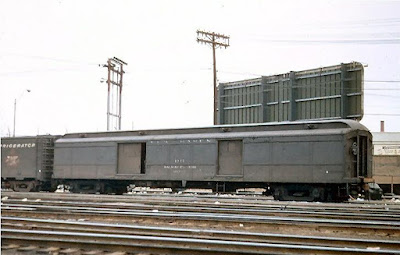 I already have a couple of the 70' car kits in progress, but the vents are cast into the roof and that complicates things. But it is interesting to see a 70' car in New Britain. Since this is a clerestory roof, it's from the 5500-5569 series of cars. 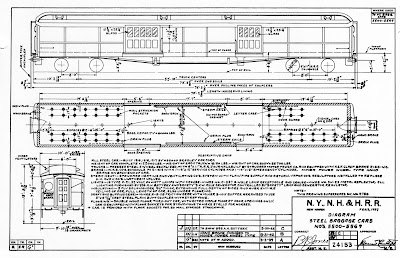 In that second Jim Karl photo we can also clearly see the side of two baggage cars spotted at the station. The first is clearly steel, and the second is wood. With three cars, it looks like several may have been brought at the beginning of the week. Counting panels, it appears to be a 60' car.
There's another even better shot of a steel and a wood baggage in the photo of the Comet at the station. These seems to be in the middle of a switching move, because the cars are sitting on the westbound main (Track No. 1). 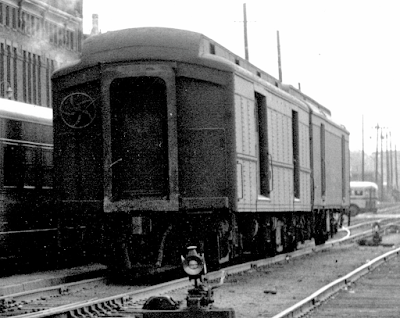 In true New Haven fashion, though, it has to be different. The number of panels is obviously different than in the other photo. It also doesn't have Ward vents, nor the angled end railing. Yes, this is a different car. Unique, in fact, on the New Haven. Car no. 5407 was purchased second-hand in 1942 and is the only car on the railroad like it. 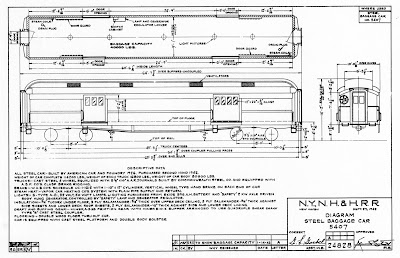 Could the baggage car in the photo of No. 1300 above also be this car since it lacks the angled end railing? No, because it has an Ajax handbrake, and 5407 has a "vertical wheel type," which, in the photo, looks a lot like an Equipco handbrake.
Some time ago I had used the Jim Karl photo as a commentary on rare cars. Well, here are a couple more. And apparently I need more baggage cars than I thought...
Posted by Randy at 3:24 PM No comments: