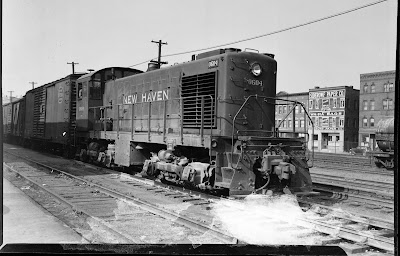 So Chris pointed out that several of our recent posts have been well synchronized. Perhaps this one will be as well, a photo he found along with one of #0604 in Essex down in his neck of the woods.

Although I had a copy of this picture, the fact that he just resent it was a bit of luck as well. I hadn't seen the email yet, when I sent him an email to let him know that Westerfield just released the NYC USRA-design steel auto car as a one-piece body and suggested that he should have one. Imagine my surprise when I opened the email he sent me, and there is that very prototype right behind #0604.

#0604 here had dual cab signals for use on both the Hartford Line (allowing it to work the NY/YN freights) and Shoreline (which is how it would have ended up in Essex on one of the Shoreline locals). The cab signal box can be seen in front of the cab.

The current Atlas model is definitely the way to go, although Chris and I are looking into how we'll do the New Haven style low-clearance cab. It's not just a function of lowering the roof (with a different but documented radius), but it alters the windows, and the rear door is shorter to accommodate the reverse lights lower position. Also note the whistle in front of the cab instead of a horn.

I'll model #0605 and #0606 and let #0604 visit periodically from Chris's layout.  I'll probably model one with the vertical radiator shutters as well. Atlas makes both variations.

Note the amount of trash and debris on the station track, and another auto in the background to identify. I wonder what color autos to get - they all look black in the photos, but models come in a variety of (presumably accurately researched) colors.