And yet still more!

So I made it over to the New Britain Library today to go through the City Directories some more. I'll be able to do that on a regular basis and still not glean everything from them. Honing in on more accurate primary sources (than the 1940 Alignment Map) show fewer oil dealers, but it also helped me identify other commodities likely shipped to the city by rail, and more importantly some additional commodities at existing industries on the layout.

Gasoline and Oil
Of particular interest was to learn more about the oil dealers. In poring over some additional maps, looking at later aerial photos, and going through the directories, it would appear that on the Highland Line, where the 1940 Alignment Map indicates there is Atlantic Refining Co, and Texaco it is now the Hardware City Fuel Co, who advertises Gulf petroleum products. They have a service station at their bulk facility at that siding, and another one elsewhere in town.

Berson Brothers, not modeled on the layout, sells Esso brand, and there is another Esso station in town.

Stanley Svea receives fuel oil but doesn't mention a brand. It would appear that there are no oil dealers receiving rail shipments on the Berlin Line.

At least two other service stations sell Tide Water 'Tydol' gasoline and 'Veedol' motor oil, and another sells Amoco, and one sells Franklin (never heard of them).

All of which raises a few questions:

Does a company like Hardware Fuel Co. also receive other brands of gas and/or oil to sell to other service stations?

If there are no companies receiving Tide Water or Amoco gas/oil in town is it trucked from other towns?

How far of a radius would a dealer like Hardware City Fuel Co have in selling Gulf oil to other dealers?

Would gas or oil be received at the bulk tracks to be unloaded directly from tank cars to trucks?

There will be fewer oil dealers than I thought, but I have another location (Stanley Svea) that will receive tank cars. In addition, I've learned that in addition to tank cars of gasoline, there will also be fuel oil (for heating presumably) and range oil (for cooking - not sure what's different yet). Rackliffe Oil Co. (not served by rail) advertises 'furnace and fuel oil' so I don't know if those are different types as well.

Of course I hadn't really thought about motor oil and greases, although those probably come to a city like New Britain in everything from cases of retail packaged cans to 55-gallon drums for service stations. Which leads me to...

Bulk Tracks
I also made a point of going through the directories to identify auto dealers, furniture stores, service stations, auto parts and tire dealers, along with a sand & stone company. None of these are on the railroad but most likely received shipments by rail at either the freight house (LCL) or more likely the bulk tracks (car loads). I want to build an interesting list of industries for waybills.

In some cases this also helps in determining where shipments originate. Within New Britain there are dealers for Chrysler, Dodge, Plymouth, Ford, Chevrolet, Lincoln, Mercury, Oldsmobile, Pontiac, Cadillac, Hudson, Studebaker, and Kaiser-Frazer (which also mentions Frazer tractors, rototillers and farm equipment). Each auto manufacturer made each model in a specific factory, and this can be used to help create waybills and select appropriate cars.

Interesting side-note - automobile tires usually had inner tubes until 1954. So I'd guess inner tubes to be another commodity to ship by rail.

There were a lot of coal dealers in New Britain in the post-war era. Several won't fit on the layout, including D&K Coal, Universal Coal & Wood (who advertises Lehigh 'Blue' Coal), United Coal & Wood (Old Company's Lehigh Coal), and Berson Brothers, among others. East of the station I am modeling: City Coal & Wood, Stanley Svea Grain & Coal, Hardware City Fuel, and Household Fuel. 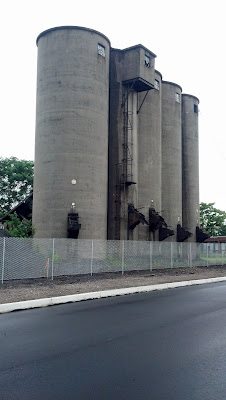 (Former) trackside view of Household Fuel Company coal silo. I never figured out how to get over to this before the busway (under construction in this photo), and they have removed the conveyor that was still there until construction of the busway began. There's still a pile of coal to the left, and the silos are still full. The street side (below) has a covered loading dock, presumably for consumers to pick up their own coal. 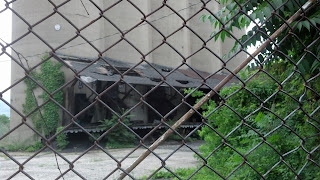 The trackside chutes look like they were for loading trucks directly and were individually labeled by size: stove, nut, buck, pea and rice. 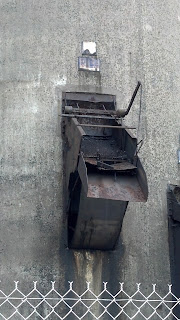 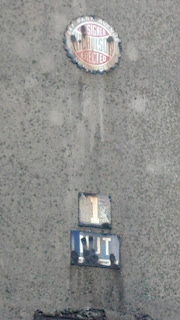 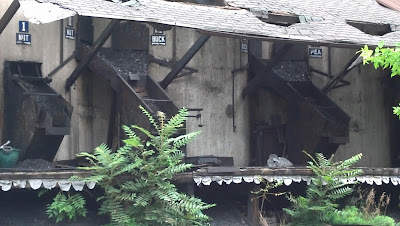 I have yet to find an ad for Household Fuel, but other dealers, like Stanley & Svea and Hardware City Fuel still advertise the sale of coke in addition to coal.