The signature scene is really New Britain Yard itself. This includes the station area, and the structures around it. There are a number of photos I'd like to replicate as closely as possible, and it's the combination of these photos and additional research that goes into building the model itself.

Here are some additional photos highlighting some of the details around New Britain Yard. You can easily see the reduction in crossarms on the line poles in these two photographs. Once again these shots also show the track and the mix of ballast and dirt quite well. The second photo shows the front of the speed limit sign and the Ring post just past the end of the platform.

The Water Column is an eBay find that was the closest I could get to what was located in New Britain. It's an old soft metal (probably lead) kit from Apag Hobbies. Never heard of them.

It's tough to tell because I have exactly two pictures that provide any view of it at all:

The K-1-d was produced by NERS. The NE-4 caboose was produced by Custom Brass/NJ International and Challenger. The Challenger model is more accurate. The only commercial circus train flats that I'm aware of are the old Walthers cars.

The L-1 was produced by Custom Brass and Precision Scale. I can't figure out what the herald is on the reefer. The single-sheathed box car in the background looks like a MP 90000-90499-series with the inverted Murphy ends and wood door, previously available from Sunshine. The care immediately behind the locomotive looks like a Soo "sawtooth" single-sheathed box car, a version of which is available from Speedwitch Media. 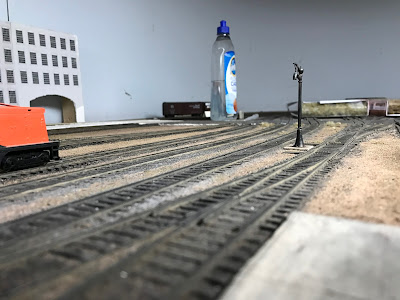 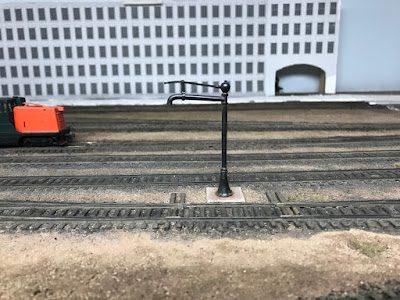 So the Apag water column is not a bad match. But it looks like the New Britain one has a bell-shaped top instead of a ball. So I'll eventually modify that.