So with the help of Dennis, Chris and Pete I've been getting the benchwork and room ready for Whiting Street Yard including staging in the utility room. What's next?

Track. Lots and lots of track.

Easy, right? I already know what I need/want and I started mocking things up when considering the freight house here and here. As a refresher, here's what I'm trying to squeeze into 11' x 30": 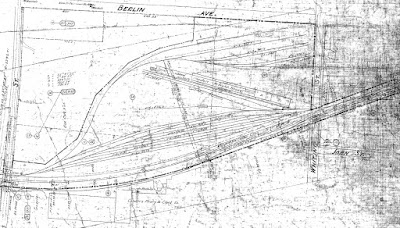 I know. Not gonna fit. At least not like that. And here's the first mockup: 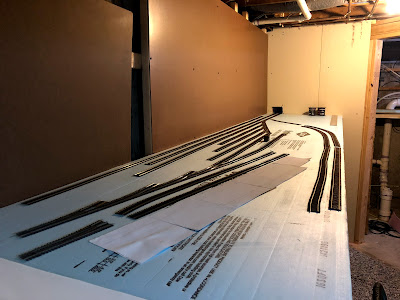 It gives the appropriate feel, with the freight house next to the yard, and the bulk tracks coming around behind it. There are only two house tracks instead of three, and two bulk tracks, instead of six, and I probably won't be able to add the additional track that goes to Stanley Tools. There also isn't room for the concrete platform on the bulk tracks, although I can add the pillar crane. The truck side of the freight house is also very tight, and will be tough to put trucks there.

The stub-ended track is the scale house track. The freight house at this point is a total of 9 doors, plus the office and a short covered platform at the end, or about 4-feet long. That's roughly 50% to scale. It's a tight fit, but everything's there. The Ellis Street bridge will be the view block, and the yard lead extends past the bridge (as on the prototype) and alongside the staging in the utility room.

So, the one thing that's sort of odd on the prototype is the placement of the scale track.

I'm pretty sure that the primary cars that are weighed are the ones from the bulk tracks. L.C.L cars aren't weighed, since there are many loads in each car. Each shipment is weighed before loading. So most of the cars at the freight house won't be weighed. Most of the other cars that are loaded in town aren't bulk commodities. So they probably have arrangements for how much each crate of hammers weighs, etc. So those cars probably don't need to be weighed either. Coils of steel from Stanley Works, probably so. A box car of tools, probably not. Anyway, if the cars from the bulk tracks are the ones that need to be weighed, why is the scale track located where it is?

The answer lies in an earlier valuation map. The bulk tracks used to be accessed by a long switchback from the house tracks:

And when comparing the two maps, that's when I noticed it.

Based on the later map, they sold a big chunk of the land since it's now outside of railroad property. They added the long curving track to reach the bulk tracks. To do that, they had to eliminate the switchback and the long track in the middle. They took that track, and the track to the old engine house and turned it into a long runaround that is separate from the yard to connect the bulk tracks to the house tracks...and the scale track.

Makes perfect sense. Pull the cars from the bulk tracks, shove them up one of the tracks, runaround the cars, and pull them down to shove them up the scale track.

Note that the scale track is stub-ended, so I don't need a gantlet track, the locomotive never goes past the scale. Conveniently, it's only a 42' (100-ton) scale. So it's short. I also have a Boulder Creek Engineering Weighstation to provide weights while operating.

So, that means I need two more tracks. So here's take #2: 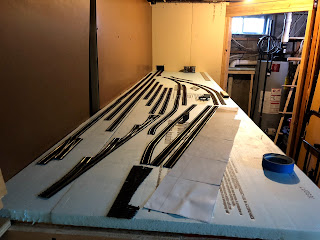 Of course, in that amount of space, something had to give. And in this case it means the bulk tracks can't fit behind the freight house anymore. Operationally, though, it will work better, and more prototypically. So this looks like a good working mockup, time to finish prepping the space so I can start laying track. Right?