One of the common truisms I often hear in model railroading, is that a fast clock is problematic for switching heavy layouts, because we switch in 1:1 or "real" time. Although I've disagreed with this assessment in the past, today I got a chance to put it to the test.

I spent the day on Tuesday working the CNZR with my buddy Dale. He's a conductor on the railroad, and I've always wanted to go out on a run with him. I got to do much more than that, throwing the iron, setting and releasing handbrakes, chocking wheels, and connecting the air hoses, among other things. It was great fun (and a lot of work!) to be a "real" railroader for a day. And it also highlighted how much longer it takes to actually switch out cars on the real railroad. 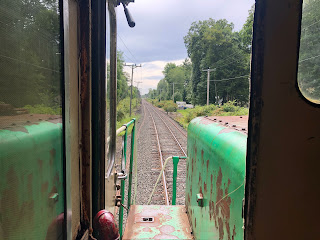 I didn't really take any decent pictures, a couple of short videos, but for the most part just enjoyed the experience instead.

The Griffins line has a single industry - Home Depot. They have two sidings, one holds 9 box cars, and the other 5 flat cars, plus room on the leads for another 8-9 cars if needed. There's also a storage track that will hold 11 cars, and up the line is a runaround that will hold another 11 cars. You can see cars on the storage track below on the left, and note the break between the first flat car, and the four other flat cars. That's crossing for the forklift. 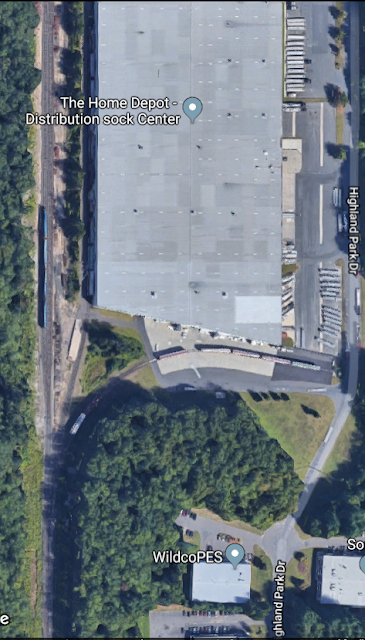 The runaround is about a mile north. So this morning the railroad had:
Runaround - 9 loaded 85-foot center-beam flats (could fit 2, maybe 3 more cars)
Storage - 5 loaded center-beam flats, 4 (might have been 5) loaded box cars.
The sidings were full, but the leads empty.

5 flats were empty and to be pulled, but only 2 of the box cars were ready to go, but they weren't ready to take any new cars today. In addition, the oldest cars must be spotted first (so the inbound cars today won't be spotted for a couple of days). On the boxcar track, they also don't like new cars to be placed in front (at the lead end) of older cars in the back. And they sometimes take several days, even a week or more, to empty the boxcars.

And there were 16 (!) cars at the interchange in Hartford to come up the line.

These 4 moves took between 1 1/2 to 2 hours in real time. In addition to throwing the iron, it involves pulling the wheel chocks, opening a knuckle, coupling up the cars, connecting the air hoses, releasing or setting hand brakes (on three cars minimum), verifying that the other brakes are released when picking up, testing the brakes, along with the paperwork.

For example, to pick up the flat cars, we had to connect to the first car, pull the chocks, hook up the air, and release the brake. We then had to connect to the other cut of flats, connect the air, pull the chocks on the first car, release the handbrakes on three of them, and check that the last car didn't have the brake set, then pull them out. Then reverse the project to set out new cars. On the box cars, every car has chocks, since they need to stay in front of their spotting location.

On a typical model railroad those four moves might take 15-30 minutes. I've seen four moves like this take much less. With a 4x fast clock, that's 1 to 2 hours. We don't model all of the manual steps it takes, and even if we simulate some of them by taking a little time, it's still a pretty good match for a 3 to 4x fast clock.

This makes sense, though. Most of the operating sessions I've run on nearly any layout, a local freight is often expected to take the entire session to run, while the through trains operate following the fast clock schedule. We had to wait for clarification of the work needed for one car, so the whole day was from 9:30 to 4:00.

When watching others switching on a model railroad, I've come to the conclusion that there are two primary reasons why it often takes longer:


Other contributing factors are often:


If you've followed the prototype track arrangement, that's not an issue. Traffic can be significant (as today showed). But, we only actually spotted 7 cars, and pulled 7 cars. All of the other moves were just to find someplace to store the loads to be delivered when they are ready for them. For my sessions, I have set my goal to have my industries at about 50% or so to capacity, and switch about 50% of those in a given session. This will vary, and with the right crews excess capacity like this week on the CNZR can be fun.

It also reminds me of Lance Mindheim and other modelers' small layouts. This is a a great example with one industry, two sidings, and two storage locations, but clearly enough work for a single crew of one or two to operate for a couple of hours.

I like to operate while keeping in mind my "men on the ground" and slow down at a turnout to let them off to throw the iron, and pick them up, etc. It adds a fun dimension to the operation, and something more than just "go ahead" or "go back" for the engineer. And I don't anticipate adding too many pauses, since even a 2-5 minute delay on a 4x fast clock isn't really noticeable.

The rest of the day was interesting as well, because of the amount of space to work in Hartford as well. With 7 cars going down, and 16 to bring back (and 1 that was there in error, so really 17 in that cut), we wouldn't be able to run around the new cut. So we pulled a locomotive at the end of the train, and used that as the locomotive on the way back with the cut sandwiched between the two locomotives. Since the delivery included only two flat cars, we were able to squeeze 13 cars on the storage track, and left the two flats with a box car between them on the flat car lead. Because of the blocking, we had to move a cut of box cars to the storage track, then the three cars to the flat car lead, then the remaining cars to the storage track.

So I had a blast operating 1:1 and, as always, learned more about how the railroad actually operates.
Posted by Randy at 11:25 PM