Because the New Haven is part of the FGEX Consortium, also known as "Our Companies." I've been compiling a list of the most important prototypes and how I might go about modeling them. Sunshine released models but they are hard to find and not cheap when you do, so I was excited when it was announced that there would be Resin Car Works minikits for the FGEX truss-rod reefers as a free gift for the Chicagoland RPM, but then it turned out that I wasn't able to make it to the show.

When the minikit was made available at Resin Car Works, I picked up two immediately. The RCW kit along with an article by Bill Welch in Prototype Railroad Modeling Volume 2 (Speedwitch Media), provides enough information on how to go about modeling more variations of the truss rod cars using Accurail or Intermountain models as a base.

As noted, Sunshine released resin kits for pretty much all of these prototypes. These are hard to find, but fortunately there are two injection-molded models available that can be used to model many of the classes. In this post I'll cover the truss-rod models I'll be building, and cover additional variations in a future post. For the moment I haven't determined how I'll go about modeling the cars with steel ends, or all-steel cars built during and after WWII. These posts will focus on the cars with wood ends.

While the Accurail models have molded on parts, the styrene used is fairly soft and it's pretty easy to scrape them off. It helps that the sides are separate pieces. Although the 4900-series says it's the earlier version, the pictures look identical and I'm not sure of the differences between the two models. I have the 4800-series for these cars.
The RCW mini-kit uses a modified Accurail body, but replaces the floor and underframe with one from a Tichy reefer underframe.

The Intermountain model is based on a postwar rebuild of the company-built cars from 1927/8. The model features separately applied detail parts, with one unfortunate exception.
The model is based on cars with an 8" side sill. For the truss-rod cars (and many other variations) this is removed.
Intermountain has not run these cars in a while, and the last I checked they didn't have enough orders to justify a new run. I've been able to dig up two undecorated kits, otherwise I'll be modifying RTR models. I think that if they offered the original postwar paint scheme applied when they were rebuilt might help. Regardless, I'd recommend letting Intermountain know you're interested in these models (especially undecorated kits) and maybe there will be enough interest for another run.

Now that I've been working on this project, I much prefer the Intermountain car, and it's easy to modify for any of the earlier cars as well. It would be even better if the placard boards were not molded onto the Intermountain car. It would be nice if the steel plates above and below the door were not present as well, but they would be too thin to be a detail part, so I understand why they are there (considering the prototype). Those minor quibbles aside, the only real shortcoming in the car for my purposes, is the roof, and it's not horrendous, just not as good as it could have been.

In the PRMv2 article, Bill provides a chart that shows in 1948 truss rod cars comprised about 11% of the FGEX fleet, 10% of the BREX fleet, and a whopping 41% of the WFEX fleet, or about 21% of the combined fleet. By 1953 these numbers dwindled considerably, comprising less than 3% of the total fleet.

The Resin Car Works mini-kit is a kitbash project with a few resin parts provided. The key resin parts to me are the end sill and hatch rests, but it provides the underframe pieces and a few other parts. You provide the Accurail 4800-series reefer body.

I'd like to build FGEX 18176 using the RCW kit plus long queenposts because the picture in PRM has some interesting repairs on the car. If this had the rounded doors it would be easy to do with the Intermountain kit because the Accurail kit is too short. Instead I'll try to square the corners on the doors on the Intermountain model.

Bill Welch told me he used an O-scale Grandt Line queenpost connected to an HO scale queenpost to make the patterns for the Sunshine kits with long queenposts. That will be an important process for this and a couple of other prototypes. I've also got some of the Tichy queenposts to see what the difference is between those and the Grandt Line ones.

These three classes comprise 85% of the FGEX truss rod classes in 1948.

There are a few other noticeable differences between the BREX car and the FGEX cars. First, it has the original peaked wood roof, rather than later one modeled by the Accurail and Intermountain models. In an article in Prototype Railroad Modeling, Volume 1 (Speedwitch Media), Bill shows how he has built these roofs on an Accurail car after removing the original roof.

There are three corner braces instead of the one on the FGEX car (the Accurail Model has two, but the lower one is removed for the truss rod cars as it is in the wrong place and the wrong shape). It also has rounded corners on the doors, which I believe indicate that it has been rebuilt.

In a post online, somebody had described that they shortened a boxcar by 6" using a table saw. I thought Chris would jump at the idea of cutting up one of my freight cars with a table saw, but he balked. Dick suggested it would only take a few minutes with 60-grit sandpaper and took one home. He was right.

Also, on the first car I modified, I used a razor saw to remove the side sill. On the rest of them I found it much easier to use a scalpel with a #12 blade. Note that this is a different shape than a #12 X-acto blade.

If you've never used a scalpel before, the blades are quite thin and flexible, but very sharp. The flexibility reminds you to not push too hard, and let the blade do the work. I also have a disposable blade remover that not only removes the blade from a scalpel handle, but is a sharps container to safely dispose of the blades once it's full. 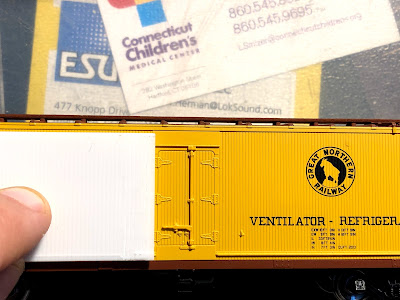 As I noted, I shorten the Intermountain car by sanding it with 60-grit sandpaper, a sanding tool, and a mill file. It's easy to measure this using a caliper, but you have to remove the side sill from the Intermountain car first. I start by setting my caliper height for the Accurail side. I then drag it along the side of the car with one jaw under the car, and the other jaw lightly marks the top of the car. It's not really digging into the plastic, just enough so I can see the line.

Another method I used which is probably a bit less precise but works well enough, especially if you're not removing the side sill, is to set a mechanical pencil to the depth of the cut (6") then slide the end of the pencil along the top of the car side so that it marks it with the side of the lead. 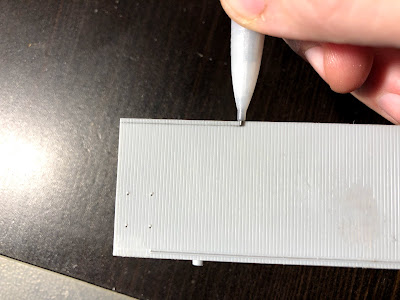 Here it is after it's sanded down. The roof sits on a ledge inside the car, so I put it back on so you can more easily see how much the car has been shortened. 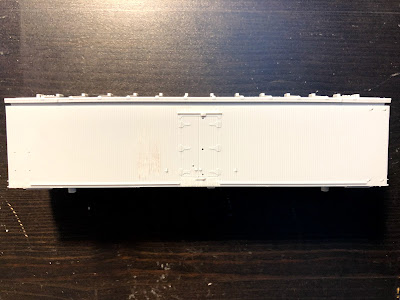 Here it is next to an Accurail car. I haven't removed the side sill from the Accurail car yet. For the cars with the wood roof, I'll need to move the ladder attachment points down because these will be under the fascia. 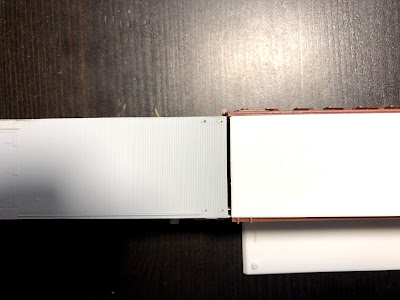 For #78207 I needed to shorten the sides, but create a peaked end. So I sanded it at an angle to leave as much of the end as possible. It's just tall enough that when you add the fascia for the peaked roof, it covers any gap.

The end sill on the Intermountain cars is a close match for the truss-rod cars, but not exact. It will need the four bolts where the truss rods attach, and a small angle that rests on top of the end sill. It also looks slightly short. I ordered a few extra sets of the resin parts from RCW and shaved off the end sill too.

There are several excellent detail pictures of WFEX 63189 in RMPv2. Other than the short straight queenposts, it's a very close match to the BREX car with the wood roof.

For WFEX 60688, pictured in the same publication, it has the new roof and long angled queenposts, along with AB brakes. WFEX 61583 also has the same configuration, although the brake system isn't visible in the picture.

WFEX 62057 has the new roof, long angled queenposts, but the square corners on the door. This would be a good candidate for the RCW kit.

In The Postwar Freight Car Fleet (NMRA, but out of print) WFEX 62663 is a good match for a shortened Intermountain car with the short queenposts, while WFEX 61583 has the long queenposts, new roof, and rounded corners on the doors.

Note that the WFEX cars are all listed in a single series in the ORER, some with the long queenposts, some short, and depending on the era, replacement roofs, rounded corners on the doors, and AB brakes. So you can really only go by the available photos to know what features a car in this series has.

So the molded on details have been removed and the car bodies modified. I need to drill and install grab irons, and wait for additional parts to arrive. More to come!