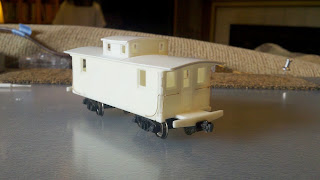 I'm a little behind on posts. Although we lost power from Irene for a couple of days, I was able to get some modeling done during the day. Here are several pictures showing the progress of the NE-class caboose. 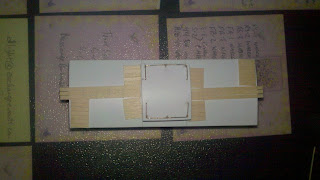 I've got ladders (Trout Creek Engineering aka Taurus) on order, and I need to decide which trucks I'll use. Once I receive the ladders I'll do the railings. It also needs the Bethlehem Car Works lavatory vent. I hit it with a quick spray of box car red from a can, principally for the roof and underside of the running boards (Chris found that a challenge since he had already glued them on). I think this color is a bit dark and a bit too red for this car though, so I'm hunting down an appropriate paint as well. 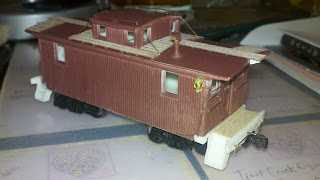 Utah Pacific markers and stack. The markers are cored to be lit if I feel like it. I know they should be red to the rear, but I'm not sure what color they should be to the side and front, so that will take a little research. I've seen pictures with brass markers, as well as black (or possibly just sooty). This is an old hack, so I'll be going with the latter. Otherwise it's pretty close to completion. 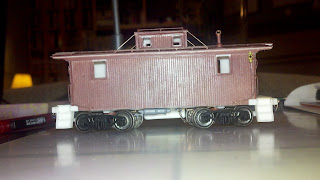 I almost airbrushed something!
I've finished the detail upgrades to the phase III 44-tonner. I went down for the inaugural paint job using an airbrush...and one of the hoses sprung a leak. It's the one between the compressor and the air gauge/moisture trap. So, I'll be picking up a replacement from Scott Mason and hopefully painting it in a week or two. In fact, the plan is to paint the two 44-tonners, the NE and NE-5. The NE-6 still requires some work so it's not quite ready yet. I'll have to decide if I'm going to replace the running board on the NE-5 by then as well.

So it appears that I might actually have two 44-tonners and two hacks to display at the NHRHTA Reunion this year. What a shock. I can't enter the modeling contest since I'm a judge, but that's OK. I don't have decals for the hacks yet anyway.

I've also been continuing my research on some of the steam modifications. I think that I can probably start with the Bowser K-4 chassis for an I-1, I've forwarded some info to John Pryke and Dick for their thoughts. The Bowser 2-10-2 also has Southern valve gear that I may use as a starting point, or to acquire some parts for the R-1-b and K-1-d conversions.

And that's about all I've been able to squeeze in here and there.
Posted by Randy at 3:52 PM