On Monday, Chris and Pete came by for a work session. Pete got a bunch of feeders in, and Chris laid track. Chris and I also worked on completing the wye at the bottom of the east helix. 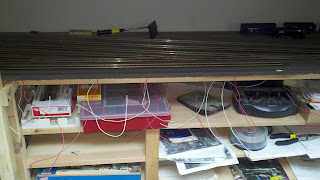 That turned out to be the biggest project. It wasn't too bad working out how to support the second leg and we got that finished before Chris and Pete left. For simplicity in operations, Chris suggested an Atlas #4 turnout for the other leg. The diverging leg is a pretty good match for the 28" radius, and the points are flexible enough that we can leave it set for the mainline, and locomotives turning on the wye can come through the other leg as a spring switch so we won't have to worry about actuation on the other side of the helix. 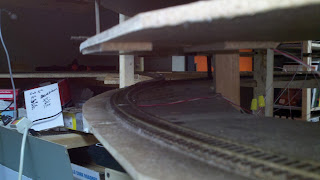 So, I picked up the Atlas turnout, and found it was a real pain to install. Of course, I hadn't planned on this, so the track was already installed, and I had to do it all in the space between two decks of the helix. It took some work, but it's in. It works OK with a box car, but it's clear that I'll have to tweak the alignment a bit when I glue it down to get the L-1 to work consistenly through it. But the L-1 works on the other side (after some tweaking there as well), so it looks like the wye will function as needed. There wasn't any issue through the mainline leg coming off or on the helix. Oh, and the L-1 just clears the next deck on the helix here... 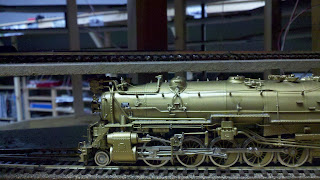 The three of us also spent some time discussing how we thought I should continue with the rest of the trackwork. I really want to get the layout operational, and I'm extremely happy with the combination of the ME turnouts and the Frog Juicer. It turns out to be about the same or lower cost than other options for actuation, and I really like the idea of just flipping the points instead of any sort of actuation on the fascia at this point.

The handlaid turnouts actually have enough friction to stay in place, at least for something like the Whiting Street Yard where they are all installed. We discussed that for future hand built turnouts I could make a tension spring under the throwbar so it's less visible. The issue with that is it will take time for more experimentation until I find an approach that works. Another option is the switches that Mike Rose is installing on his turnouts built by Jim Lincoln. Those would probably be cheaper than the other options, but again it's going to take me time to get it up and running.

So for now we landed on using the ME turnouts for the layout. If I decide that I can't detail them to my satisfaction, then I can replace them with the handbuilt ones later. The only real downside is that the ME turnouts only come as a #6. So I did some testing and the #6 crossovers seem to be acceptable for reliable operation.

So that's the current plan of attack. There are still a few custom turnouts that I'll probably have to build, but for now I can work on getting the layout running.
Posted by Randy at 4:08 PM