I've been looking forward to building (at least one of) the gas holders for the New Britain Gas Light Company. Initially I was hoping to build the main one, which is about the size of a 5-gallon bucket if made to scale. I wasn't quite sure how I'd make the tank, but have some ideas.

Here's the picture from the box of the Walthers kit: 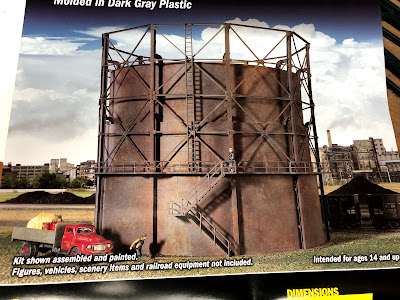 And here's a picture of one of the holding tanks in New Britain: 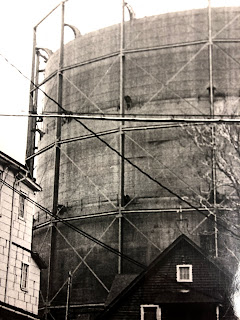 Overall, my preference is for folks to see the structures and recognize them for what's being modeled, rather than seeing "the Walthers kit." Aside from the size itself, the major visual issue is the two courses of bracing versus four on the prototype.

As it turns out, the way the kit is designed, it's not all that difficult to address most of these issues, I'll probably tackle some of the detailing stuff later. Here's a look at how I address the major points:

The kit comes with two sets of main supports. One makes it look like the tank is nearly full, the other with the tank lower. Using the supports for the higher tank position, I cut off the very bottom, which is designed to fit into slots in the base. 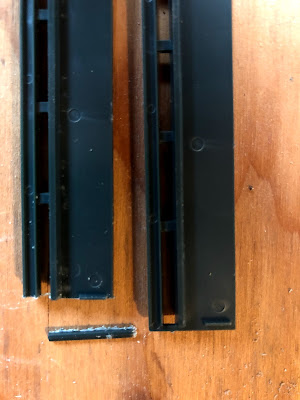 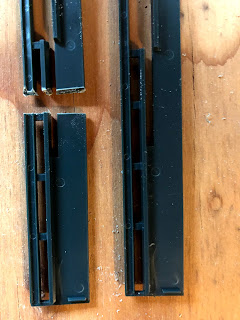 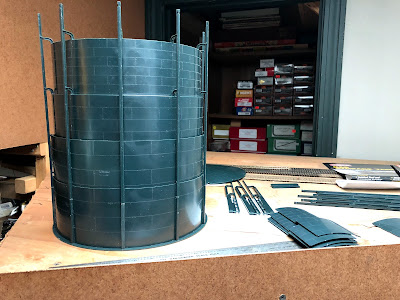 The lowest course as designed leaves enough of a gap between the tank and the support to squeeze in another course. This is the model half-built, and here it is with the tank completed, which required a second kit to get enough pieces for the extra tank course. I suppose I could have tried casting the part, but it seems like the time and money for the making the mold and casting the resin wasn't really going to save anything vs. getting the kit now while it was still on sale. In addition, I have other parts in case I need them. 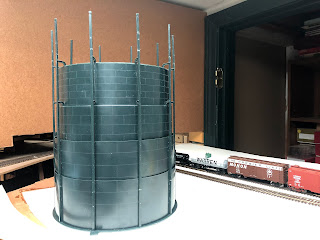 For now I've tacked on a few of the Walthers supports with the center horizontal bracing removed. It doesn't look too bad. I think that the vertical supports may be a little too high, and I might lower it so the bracing reaches the ground, but on the Walthers' model and a lot of prototype photos I've seen, the lowest course doesn't have any bracing because it doesn't move. 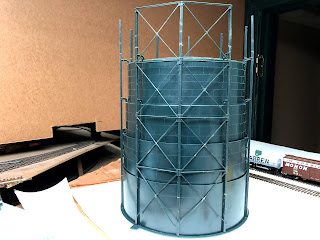 But overall, I like the changes. The proportions look better to my eye, and the number of courses of both the tanks and bracing match the prototype photos. I'm considering replacing the horizontal braces with channel as seen in the prototype photo, and I might scratchbuild the bracing altogether so it ends at the top of the first course. This would also allow me to end the bracing at the top of the first course, and will also make the individual sections of bracing proportioned more like the prototype.

Email ThisBlogThis!Share to TwitterShare to FacebookShare to Pinterest
Labels: Structures