So the building is pretty much done for the Middletown Scale House. I also needed to build the scale track itself. The process is the same basic idea as what I did in Part I and II for my scale track, except that it needed a second row of PC Board ties for the gantlet track. 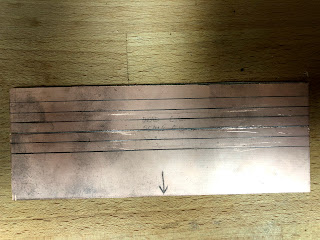 A few things I decided to try a little differently. First, I noticed that the PC Board ties weren't centered under the rail on mine. So I first drew, then cut each line. I cut it all the way through the copper because it would also separate that strip from the rest of the copper, requiring less heat and more control when tinning.

One rail was placed with the PC Board tie at the edge of the line, and the opposite rail was just covering the line with the same edge to ensure they were better centered under the rails. 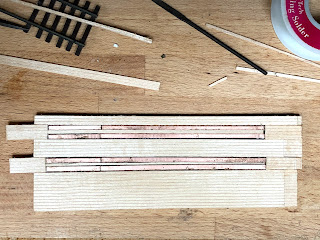 I then went through the process of adding the boards and weathering them. Note that there are a few small pieces at the end of the scale tracks to provide the 2' clearance at either end. All of the end pieces are overlapping so I could saw them even together. 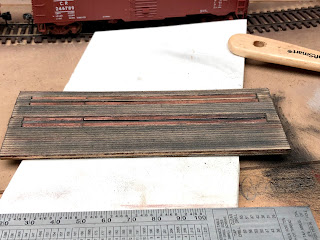 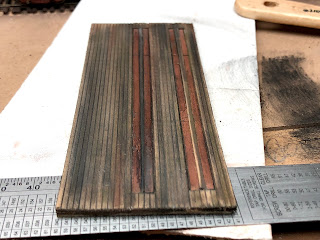 The process of decorating was similar, but this time I applied the Pan Pastels while the stain (ink) was still wet. This worked better I think. I then sanded the whole thing to reduce the amount of color and brightned it with the neutral gray tint again. 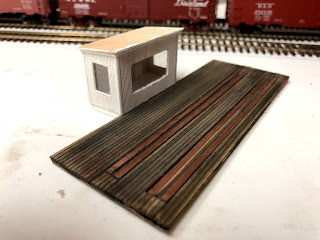 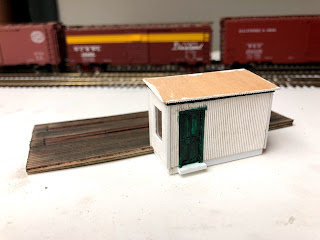 When looking at the picture, it's clear that the scale house is white. I'm on the fence as to whether I think the framing is brown or green. Brown would have been the most common, but it really looks like a dark green to me, and NH Hunter Green seemed like a good choice. Chris liked it, so that's what matters. I haven't weathered the building at all yet (and still need to finish the roof).

So this part of the process was, overall, very similar. There is one thing that I thought of after the fact, which might have been more important than I would have thought. I could have tinned the tops of the PC Board ties before soldering them to the main base. It wasn't a big deal tinning them in place, but would have been easier if they were already done. 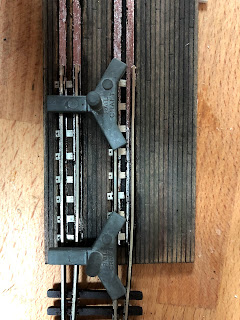 So the gantlet track itself is made from two Micro Engineering turnouts, with all of the ties (and frog) removed just past the jumper wire. Because the through track doesn't have storm guards, I used some etched tie plates I had on hand from Proto:87 Stores. These are actually turnout ones, and longer, but the longer part will be beneath the storm guard and not visible.

The flux was enough to keep them in place, and they can be soldered. I didn't tin them, just pressed the track down and soldered the track and tie plates to the PC Board tie at the same time.

I then used two track gauges to keep the rail in gauge while soldering each of the other two rails. The distance between the through track and the scale track is within the prototype range, and was largely dictated by the turnouts themselves. Because the points are so close to the scale track on the prototype, I cut all of the rails on the turnout to match the shortest rails so the track joint would be in the center of the scale, and I wouldn't have to use any extra pieces of rail. I didn't use rail joiners, I just aligned the rail while I soldered it. I also painted the track with my standard Rustoleum Camoflage (Brown) before installing it. 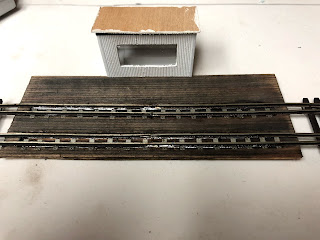 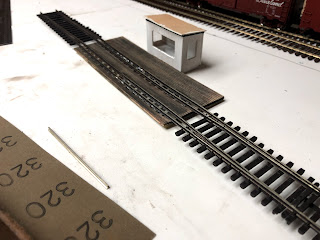 So the problem I have is that the PC Board itself has warped. The ends curve up. I don't know if it was the many applications of heat, or what, but it did. This is a single-sided board, so I don't know if one with copper on both sides would have been better. But I do think that had I tinned the PC Board ties first it might not have warped, or not as much. Chris and I have both decided it's workable, and once it's attached to surrounding trackwork it shouldn't be a problem. It's just a bit annoying that it did.

I'll be putting it all on a styrene base, finishing the concrete frame around the pit, and doing the roof and windows when those arrive. We'll be able to install it on Chris' layout soon!
Posted by Randy at 10:22 AM