One of the few Sunshine kits I have is an ATSF Rebuilt Ft L & N flat car kit (#66.2). It's an interesting prototype, because it was originally built as a 50' flat car, and extended to 53'6" by adding a new section in the middle of the car when rebuilt. Another aspect I really like is that the early ATSF flat cars had fishbelly center and side sills.

The Rock Island performed a similar modification with their USRA clone 43' flat cars, that they later lengthened by adding a 10'6" section to the middle of the car. Since the Red Caboose kit is a USRA clone flat car, I wondered how hard it would be to do the same?

Well, it's a bit more work than might be expected. Pete gave me two extras he had, and I started experimenting. One issue is that on the extended cars, the wood decking extends beyond the car sides. On the Red Caboose kit, the deck is part of the (nearly) one-piece body. For some reason that I've never figured out, there is a section in the middle of the deck that is a separate piece.

Because of the design of the model, though, it meant I'd need to remove the deck and essentially turn two of the cars into flat kits to reassemble and build a new deck. Here's a quick test run: 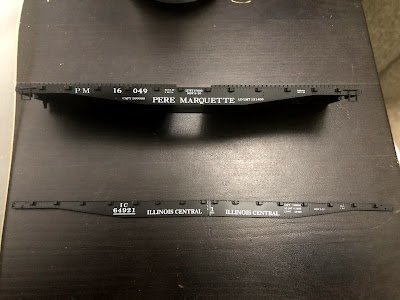 The top is an unmodified car, and the IC parts are both from the same model that I cut up. It's hard to see that the IC car is 10'6" longer than the PM car, but it is. There's a vertical rivet line where the crossbearer is on the original car, and I cut just outside that line (after measuring with a caliper) to get the right length. The rivet lines will be shaved off and two splice plates will need to be added.

To get this far, I started by cutting off the ends. Then I scored along the seam between the steel side and the wood deck, and then a deeper score on the inside so I could snap off the deck. It will probably be easier to use a couple of kits, since the stake pockets won't be installed already, but I think it's definitely a viable project. I don't have any info on the underframe design, etc., yet so I'll need to do some research before progressing, but I like the idea and the two splice plates where the extra section was added will make for a unique car. Additional cars were rebuilt from 46' flat cars and 7'6" additional sections. I don't have a photo yet, but it's possible that they could be similar other than the location of the splice plates.

If you can find one, Sunshine produced the car as kit #45.9, but this looks like it will be a relatively easy and worthwhile kitbash. Perhaps that's how the masters for the kit were made?

By the way - the ATSF kit I have (#66.2) has bulkheads. I don't need the bulkhead version, so I'm happy to trade for one of the kits without the bulkhead, or if somebody can use the bulkheads on their own, let me know.
Posted by Randy at 9:19 PM