Quick fix - Power to the Points

One of the things that I planned to do, but didn't was to solder very flexible feeders to each point on the Microengineering turnouts. The points are a separate piece of rail that receive power from both ends, and the one end is through a rail joiner.

Since I don't love adding feeders, and I was laying track at a rapid pace, I skipped the step. For the most part I haven't had any issues, even in the fully scenicked portions of the layout.

But while I was running trains for an open house this past weekend, I did have a spot where the locomotive would frequently, but not always, stutter or stall. This is a location where two turnouts are connected points-to-points, so initially I thought that since there was no feeder in that location I'd add a pair. 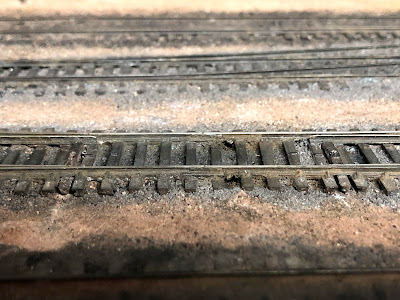 Once I add a bit of ballast, the new feeders will be entirely hidden. But it didn't resolve the issue.

So I tested power on each separate piece of rail and found one of the two points is not receiving power. This is a scenicked and weathered turnout.

So I cut a small piece of stranded wire, stripped the end and wrapped all but one strand to get them out of the way. I left a small section of insulated wire as a handle.

I put a slight kink as a "hinge" in the wire, tinned it, and soldered it to the back side of the points, right above the rail joiner. It's almost entirely hidden behind the rail. If I need to to it on the front points, then I'd do it on the front of the rail to avoid issues with derailments, although it's small enough I'm not sure it would matter. 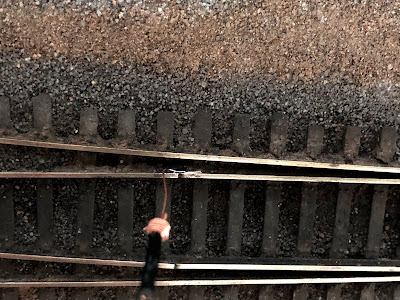 Once I tested the rail for power, I cut off the "handle." 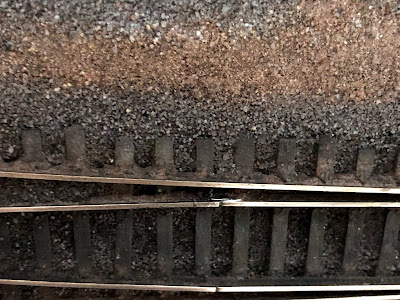 Since I'm lazy, I'll only do this where it's actually needed, but it really took longer for the soldering iron to heat up (and for me to type this up) than to actually do the fix.
Posted by Randy at 6:50 PM