So in the last post, I mentioned that the primary job of the Station Agent is to write out switch lists for the crews. But what are they, and how do they go about creating them?

For years, Chris and I were trying to hunt down an elusive NH Switch List. We had an early one: 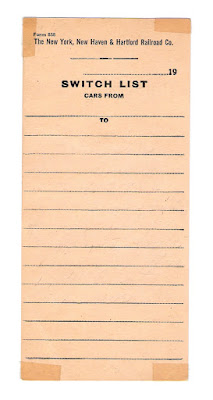 I'd seen some other switch list forms on from other railroads, but nothing that directly applied to our particular era.

We had come to the conclusion that crews often used them to do their work, and also had come to the realization that they were prepared for the crew, by the Agent. This makes sense, because while the crew would have waybills for the cars on their train, they wouldn't have any idea what work to do in a given town in regards to pick ups. This doesn't mean that the conductor might take that paperwork and write his own switch list in whatever format they prefer.

The first New Haven document that had specific information about switch lists is a document that describes the installation and use of a new computerized system installed by IBM in 1945 in Maybrook and Cedar Hill, to be expanded over the next few years to other major yards.

They showed a comparison between the old: 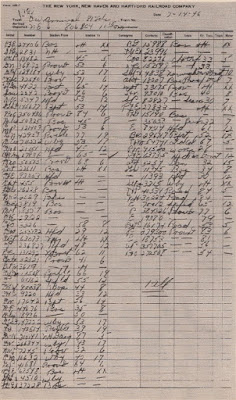 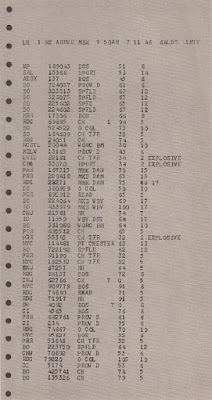 As this is a switch list for the Maybrook hump, it notes that it was made in triplicate, with copies for the hump yardmaster, the car marker, and general yardmaster. They were not provided to the trick yardmaster, home route clerk, or record clerk at the general yard office. In addition, it specifically states it was transcribed by the yard clerk fro the bills or inbound train arrival sheet.

In other words, they didn't know what cars were coming in until the train arrived.

For the new computerized switch list, it was transmitted ahead of the train, and copies were also furnished to the receiving yard office file, trick yardmaster, home route clerk, and record clerk. However, this only applied to yards with the new equipment, and small yards (like New Britain) would have to handle the paperwork the old way.

An important thing to notice is that while the handwritten switch list is on a form for that purpose, it only loosely follows the format, and there are two columns when the form is designed only for one. In other words, they didn't follow the format of the form or fill in all of the columns.

It ignores the columns for Station From, Consignee, Contents, Classification, Seals and Rider (which indicates this particular form was probably only used at the hump yards).

Computerized
The computerized form contains the following information:
In the header:
Inbound train (L&H 1-92) arrived in Maybrook at 7.50 am on 7/11/46 with 64 loads and 1 empty.
Then the same info as the handwritten oneL
Road - Car No. - Destination - Weight - Track No., plus notes (several are listed as explosive)

What's clear in both examples is that it only lists important information for the crew to do their work, and nothing more.

I also came across what look like several B&O switch lists, specifically for blocking an outbound train:

This handwritten list is on the back of a B&O Home Route card. Without any more info, it's hard to know exactly what it was, but that's what it looks like to me. It's similar to a couple of NH Home Route cards that I have with what are clearly notes taken by a new employee at a yard, basically things to remember about the new job.

George Ford, once an agent at Thompsonville, has a sizeable amount of old railroad paperwork and had a folder labeled "Switch Lists" that simply held manila cards. He also had one of the old switch list forms, blank, with his wife's shopping list on the back.

The reason it has been hard to find NH switch lists is because they weren't a form required for the railroad to do business. They were simply a tool for the crew to do their work, after which they were just thrown out. Although they published some forms for the purpose, it appears that agents would use what was handy, rather than order the actual forms.

In talking to Dale and Joseph, who are both freight conductors on prototype railroads, they confirmed that they get switch lists when they come on duty. There's a different list for each cut of cars they receive, which is essentially a wheel report, in that it lists the cars as they appear in the cut. In addition, they get switch lists for pick-ups in town. They receive them via email, but also paper copies, which they just throw out when done.

They also confirm that where there is more than one crew, they all receive the same paperwork. The crews work out who will do what work between them (although since they do this every day, it's largely known by them anyway).

So for the agent on the layout, their switch list just needs to include whatever info the crews needs to do their work, and will probably follow the format of the handwritten NH example pretty closely. For inbound trains it requires the industry and track number or spotting location if needed. For cars being picked up, the outbound train and block must be noted so the crew knows how to build the outbound cuts.

They compile the lists from several sources:

Waybills from inbound trains. They list the cars in the order they appear on the train.

Report of Cars on Hand. This notes loads and empties that are ready to pull as reported at the end of the previous day (something that Joseph confirmed they still do on the Pioneer Valley Railroad). The loads have waybills, the empties have Home Route Cards unless they are a direct connection. Then no paperwork is required. The Agent has this paperwork to work from.

More requests for empties or loads to pick up that I provide during the session from industries.

In the past, Chris and I have used a Santa Fe switch list that I modified to add a New Haven header. Going forward, I may let the agent use whatever he would prefer for them, and if I can dig up a blank form 1426-1 switch list form, I'll have those available too.