For my operations, I'm using form 1464 - Empty Car Waybill and Home Route Card as part of the process. It's an interesting piece of paperwork, intended to help ensure that the car routing rules for empty cars was followed. Basically this means the car is returned to the same junction and road from which is was received.

Cars received from a road with a direct connection did not need these cards. When empty they were returned to the nearest junction with that railroad.

These are generally printed on manila cardstock and are about the size of half a waybill.

In reality, there were a number of different form numbers, and I think the variety of the cards highlights their importance on the railroad.

This early version serves a slightly different purpose than the later ones. You can tell it's the original version of the card because it's simply Form 1464. As revisions are made, the New Haven added a revision number. So the next version of this form would be 1464-1, or revision 1. Most of them do not include a date, so we're reliant upon finding used forms to know when that version was in use.

This is just an Empty Car card, not a Home Route Card. It is used when an empty is confiscated for loading. In this case the car was in Wallingford, and it is being sent to Brick Yard 5, presumably also in Wallingford.

Form 1457-G: Home Route Card
It appears that Home Route cards were a separate form at the time. While this one is not dated, the style and paper stock leads me to believe it is from the same era, perhaps as late as the '20s. 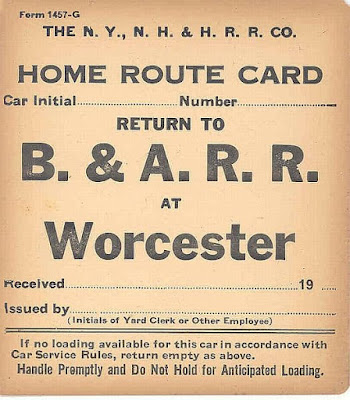 As you can see, this form is designed to tell you exactly which interchange and road to deliver the car once it has been emptied. Each day that a foreign car is on the road the railroad paid a per diem charge to the owning railroad of the car. This card would be with the waybill of the loaded car. When the car arrived in town, the Home Route car would be filed by the Agent. When the car was empty, this card would be pulled from the file and serve as the waybill for the return trip.

At some point, these two cards, the Empty Car Waybill and Home Route Cards would be combined into a single form. They would also continue using pre-filled versions of this form, like this one that is specifically for the B&A at Worcester. The letter designation ("-G") is for this location. It's not a revision number.

I know this because I have copies of several of the later forms thanks to George Ford. 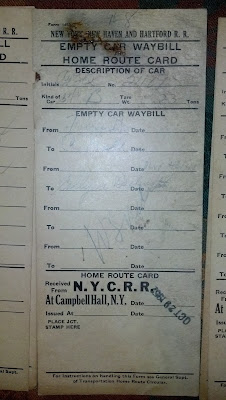 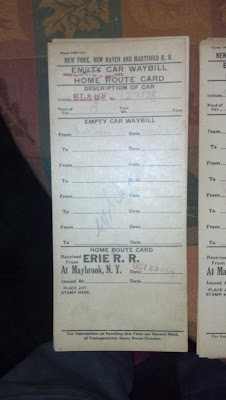 As you can see, there is a section in the middle of the cards now for reloading, and the point to return the car is printed on the form itself. However, it is unclear whether the appending number ("-2") is indicating a revision of the card, or a different form altogether since one of them is printed for NYC at Campbell Hall, and the other is the Erie and Maybrook.

Based on several others, I think it's just the form number in this case, not the revision number: 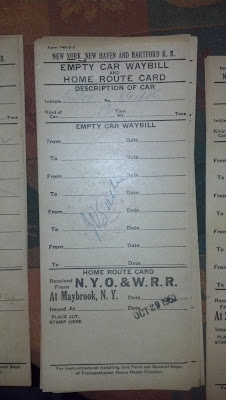 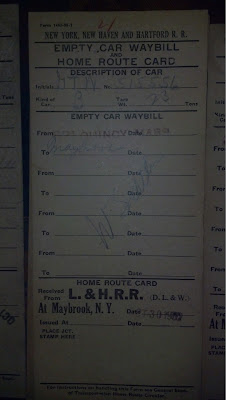 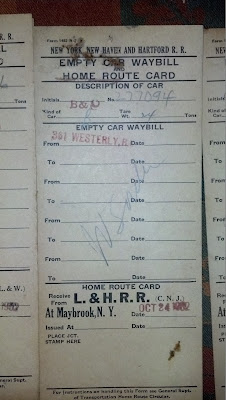 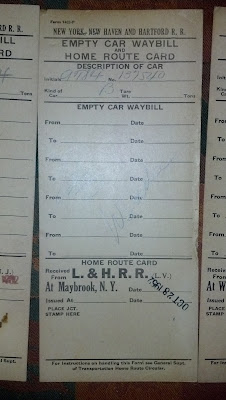 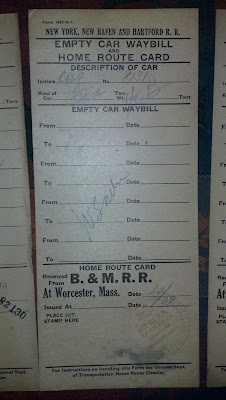 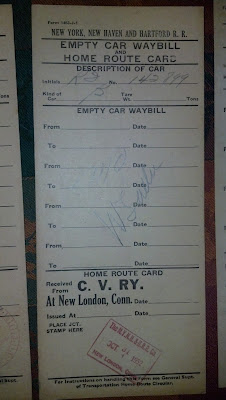 Note that several of them are for the L&H railroad, but note a specific connection beyond that road.

Form 1464: Empty Car Waybill and Home Route Card
But what about the form I'm using? It appears this is a blank card that doesn't have a specific loading point pre-printed on the form. In this case I have several revisions.

In this case I have revisions -5. 6, and 7 in addition to the original I posted above. You can see minor differences as the form was revised, first with the addition of a section on the interior condition of the car, then with a place to note the last commodity and type of floor. I have blanks for -6, and -7, but might modify one back to the -5 revision since I know that one was in use in 1952. I don't have any for the late '40s yet, so I'm not sure what would be different there.
Posted by Randy at 4:21 PM