Return of the Son of Crossing Shanty

So building and installing the crossing shanties seemed simple enough. Until Main Street. For years I assumed the two-story one at Elm Street handled these gates as well, although I had no idea how they would be mechanically connected. But then I found this picture: 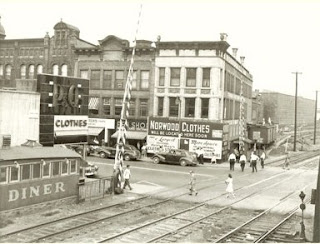 Sure enough, there's a shanty right behind the gate on the northeast side of main street. The date is unknown, but looks like the '30s or '40s. No problem, I can do that. 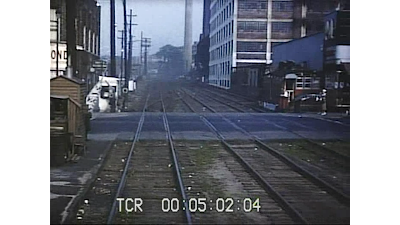 But in the Kent Cochrane video (c1952/3) it's on the southeast side of the tracks. It still looks like a small square shanty. Again, not a big deal, they moved it. So the question would be when. 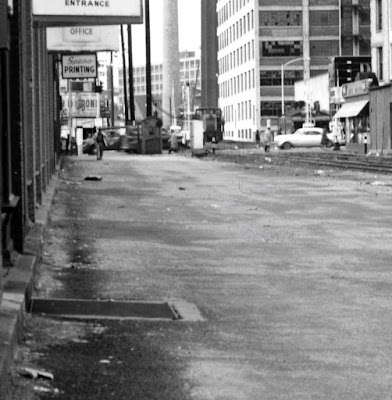 In this post-1956 picture it's still on the southeast side of the tracks, and is clearly a simple square shanty. 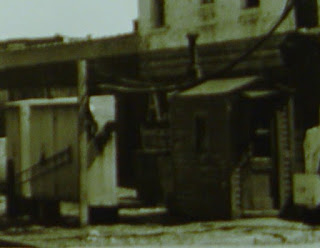 And in a later picture ('60s?) when the arcade was demolished, is a good shot of the front. This structure will serve as the model for the "standard" crossing shanty I'll build for East Main St., and Stanley St. if I can fit it. Looking at it more closely, it's really rectangular in shape. Looking back at the Washington St. shanty, it looks a lot like it was the same size, then an addition was added on. I don't know if that's the case, but I'll use that as a starting point.

Here they are under construction: 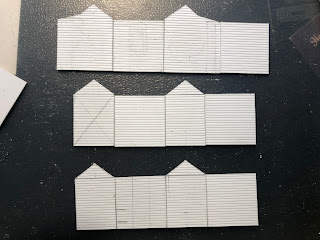 The Washington St. one is on the top, and the two small ones will be for Main and East Main Streets. The size is based on a 30" wide door, and a 24" wide window, then just working the dimensions until they looked "right."

Note that in the Cochrane video, the electrical box isn't present yet. I'm guessing that was added shortly after the video for the automatic crossing gates. 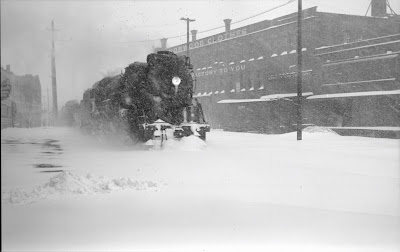 Since it's not there steam era photos, such as in this c1947 shot by Kent Cochrane of an R-1-b on a winter day, I figured I'll make it moveable, placing it on the northeast side of the tracks for the 1948 and earlier sessions, and southeast for the '49 and later, at least until I find more specific information as to when it was moved.

And then I noticed this: 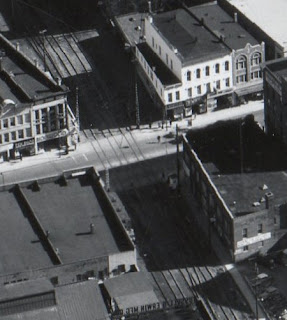 This is a crop of one of the 1955 Thomas Airviews, and the crossing shanty is on...the southwest side of Main St.? Huh?

That doesn't make sense, because we know it's on the southeast side after 1956 (because of pictures taken after the station is demolished). The Cochrane video is c1952/3. So why would it be on the other side of the tracks in 1955 between these two dates?

As noted, I can make it moveable, but I need to double-check the date of the Cochrane video. But based on the photos in the late steam era, I think it's probably still on the northwest corner in (at least most of) my era.

While I'm at it, I should probably get started on Embassy Diner...
Posted by Randy at 3:32 PM