The Son of Crossing Shanty

After completing the two-story crossing shanty at Elm St, I decided I might as well work on the other ones that I'll need.

Washington and High Streets
On the layout, Washington St. and High St. become one and the same. I don't have the room for the additional block of Russell and Erwin, and as a result had to eliminate a runaround and a siding (although as I type this I can see the benefit for the runaround at that location and will have to see if maybe I can squeeze it in...). Anyway, I know there are crossing shanties at both locations, as can be seen in these aerial photos from Thomas Airviews taken in 1955: 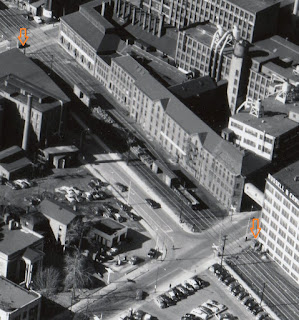 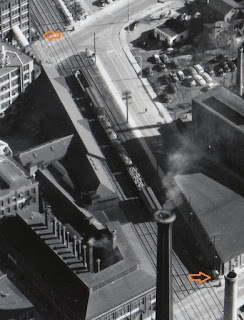 Other than the aerial photos, I don't have any pictures of the High Street one, although it looks like a simple square shack. But I do have photos of three sides of the one on Washington St.:

The front, taken from a picture on a snowy day (and the first photo I had of the shanty). 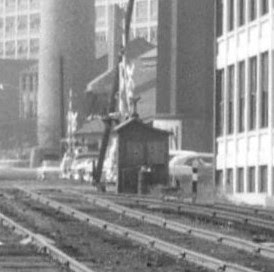 The back, in the background of a photo taken from Main St. In this photo, the second block of Russell and Erwin buildings have been demolished for a parking lot. But it also demonstrates the view I will get on the layout, since the smoke stacks will be right next to Washington/High St. so even though I've eliminated the city block, the major structures will still be present, and in largely the correct location for photographs. 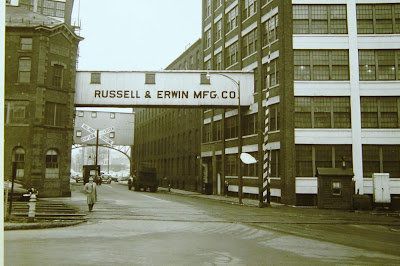 And this excellent photo of the side taken from Washington St. If this was the only picture I had, I would have assumed a simple square structure, without the compound roof that is evident in the other two photos. And while I can't build this scene exactly, I will build the factory buildings that are on the left behind the smokestacks, which will allow me to still build the two pedestrian bridges between the factory buildings.

Another aspect that I'm working on for this, and other scenes, is the fact that they not only have the manual gates still in use (thus the crossing shanties), but they are of an older style that are long enough to span the entire road. While Walthers makes manual gates like these, they are too short and too chunky. 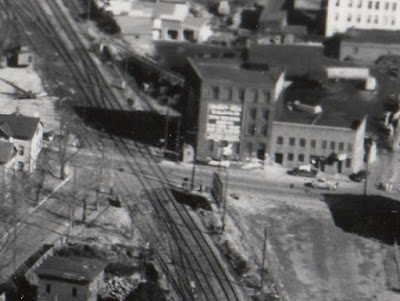 It's also a helpful photo of Stanley Svea (the building still stands), and the surrounding area. You can see the elevated coal trestle on the far side of the building. This will be a simple square shack.

East Main Street
I don't have any photos, aerial or otherwise, of the East Main St. crossing. None of the maps I have note the location of a crossing shanty either, although my assumption is that there must be one. How to find out?

The Employee Timetable. Rule 1705 tells us what crossings have flashing light signals, and in New Britain in 1948 (the one I have handy), East St. and Wooster St. do, but not East Main St..

Rule 1707 tells us that the normal grade crossing whistle signal is not used in New Britain between Stanley and Curtis St., but that means it is used at East Main St.

Rule 1713. Public Crossings at Grade - Stop and Protect per Rule 898.
There are only two places within New Britain on the Highland Line where the train must stop and protect, Myrtle Street (which is a switching lead for Fafnir Bearings), and the Bonali private track at Wooster Street. Which means East Main St, must have a manned crossing shanty.

I don't know what it looks like, or what side of the street, so I'll make it a small square shack on the north side, since that's where I have space.

Berlin Line
I have pictures of two-story crossing shanties at Church St and Chestnut St. 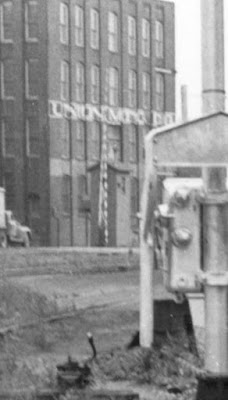 This is taken from Elm St. and is from the series of photos in 1956 installing the Elm St. grade crossing. 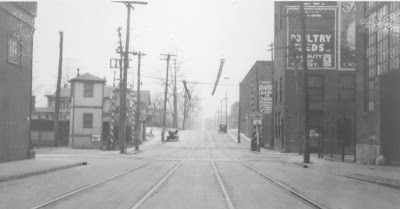 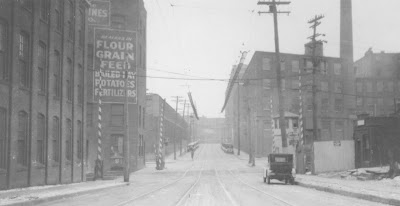 This is a pair of photos looking East and West of Chestnut St c1920s (?). The Rogers Door and Sash building is still there, but the rest is largely gone. The flour, grain, feed (and poultry feeds looking east) sign is on the C. W. Lines grain silo. I was excited when I first learned of it, since I could have a grain silo, to find that it's just another brick building. In any event, it won't fit on the layout (it's in the middle of where the Berlin Line ducks under the helix).

I don't have any pictures of Park or Whiting Streets, nor do shanties show up in aerial photos, but the Whiting St. one is on the valuation maps. So I know the location (it will be on the lift up of course...), but not whether it is one or two stories. Because it's a wide open area, I might go with a single-story one, but all of the ones that I have pictures of on the Berlin Line are two story, so I might use one of those as the basis of the model.
Posted by Randy at 3:22 PM