Bill Welch and Thanks

For those who haven't heard, Bill Welch passed away on November 15th of pancreatic cancer. My mom passed away 11 years ago on Thanksgiving morning of the same terrible disease. This year in particular is a tough one, because we have lost a lot of great modelers before their time.

It's only in the last couple of years that I met Bill in person, but we had quite a few email discussions before and after. Known to many as the Extreme Modeler or the FGEX/Our Companies Guy, he was an excellent modeler, and generous man.

I'm sharing a photo that was the last correspondence I had with him shortly before he passed. Chris and I were prepping several new collections of photos to catalog for the photo library, and as soon as I saw this one I said, "I have to send this to Bill Welch."

While there are plenty of other modeling buddies that will enjoy the subject matter, it reminded me of Bill because of his love of finding photos of unusual freight cars to model faithfully. Not unusual in terms of a rare car, but with minor differences from the standard of that car. Details such as slightly bulging corner bracing on a single sheathed box car, a damaged fascia board on a reefer, or freshly replaced boards in a wood running board.

This photo is taken from a series of photos after a derailment of New Haven train NO-7 in Newtown CT in 1959. It's the rather unusual repair that immediately jumped out at me.

So here's my little tribute and thanks to Bill Welch, along with all of the other modelers that have inspired me. And I hope we all take as much pleasure in (modeling) the little things like he did. We'll lament the loss of Bill and the many other modelers this year, but be thankful for how they have left our lives, modeling and otherwise, richer and better. 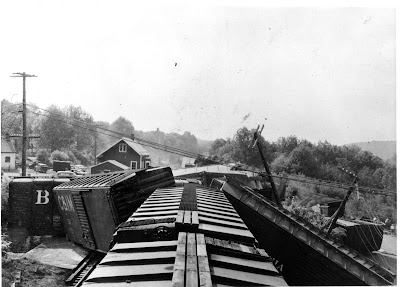