When I removed the backdrop over the east-end helix, it provided an opportunity to include East Main St. on the layout. I was pretty happy to be able to do that, since one interesting aspect of New Britain are the large number of crossings at grade. For a long time it had looked like only Main and Elm Streets would be on the layout, eliminating that aspect.

This would, however, require a turnout in the middle of the street. Not a big deal, I've done it before, but when I looked at it more closely, I found that moving a single turnout eliminated this issue.

This required some of the modifications I make on the Microengineering turnouts to make them fit.

For this I removed all of the ties except one just beyond the frog. I also removed the throwbar that extended beyond the rail when switched toward the other track, plus the ends of a number of the ties, leaving just the portion with the tie plate/spikes to keep it in gauge. You can see that the other switch on the diverging route had the same modifications.

This allows me to move the points to this turnout to just past the frog of the mainline turnout. The spikes on the single tie I left in place will also ensure that the track stays in gauge. 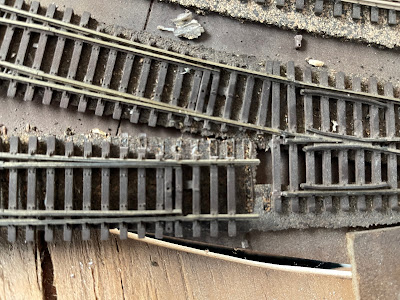 This moves the points far enough out of where I'll be running East Main St. I used a spare piece of masonite as a guide. 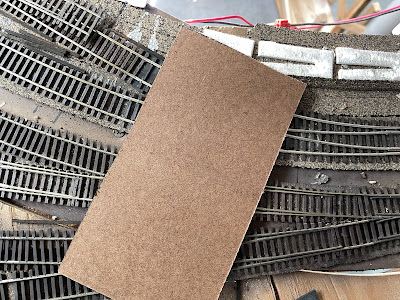 Ballast will hide the partial ties and disguise the modifications. I also rearranged the industry tracks a bit since they needed to move too: 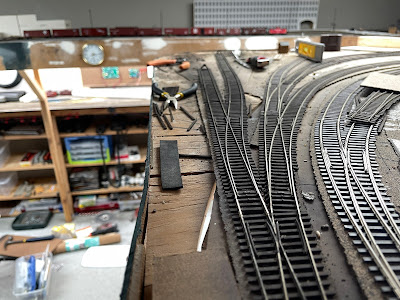 This will help separate the Hardware City Fuel tracks form the track for the City of New Britain storeyard, so that's a bonus. Now I just need to solder the straight rail to attach the two turnouts together, and add a strip of styrene to glue the other rail to the frog plus ensure there won't be a short. I don't solder joints on the track often, but it's essential for modifications like this to ensure smooth running and electrical conductivity.

Another bonus was that these two tracks were the only two still connected to the electrical bus in this section of the layout. Why is that a bonus? There is a location above the second desk where the bus, for some reason I don't recall, ran underneath a support beam when it clearly should have run above it. Since all of the other feeders need to be redone, this meant I could also pull the bus out to that point and route it properly. Of course, I could have just done that to start, but I was being lazy and using the feeders as an excuse not to do it. So the whole east side will get new feeders too.

In the photo can also see another turnout on the right sitting on top of Track 5. Right now there is a Walthers turnout as a (maybe permanent) stand-in, because the geometry needed couldn't be accomplished with the Microengineering turnouts (a curved switch with the outer radius at 24"). But, since this allows me to move East Main St. over at least 6 inches, the industry track can move too. Which means I will be able to use a Microengineering turnout there, which I greatly prefer.

You also may notice that that turnout on the westbound mainline for Track 5 is also a Walthers turnout. I am going to replace that with a handlaid turnout, and I'll do a detailed post and maybe a clinic on how I handlay turnouts, along with the installation of a Fast Tracks Diamond Line crossing.