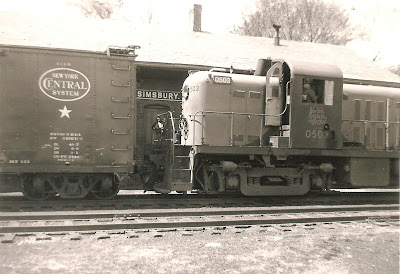 What a pleasant surprise! This is, of course, YN-3 in Simsbury, c1948-51. The freight house is still there, now as Plan B Burger Bar. (Excellent burgers, too!)

Bob thinks he may have seen a couple other photos from the same sequence, but can't seem to find them right now. So there may be more to come...

Interesting NYC box car, too. Unfortunately the photo is too blurry to make out the Lot number. The NYC had two major and one minor class of early steel box cars.

The first group was 6,500 steel auto cars built in 1916. They were later modified into single door box cars starting in 1937. The rebuilt cars are available as resin kits from Westerfield.

There were also 9,500 double sheathed auto cars built in 1916. Many of these were rebuilt 1935-7 into steel auto or box cars. One group of the rebuilt box cars was released in resin by Sunshine.

The NYC also built nearly 30,000 cars to a design produced, but never built, by the USRA. They were as numerous as the Pennsy X29 box cars in this era. These cars were built through the '20s. These cars are also available as resin kits from Westerfield, or in plastic from BLI. The Westerfield models cover the life of the cars, with BLI good for a smaller group.

In addition to these cars, there were also 4,000 auto cars built to this design. These are available from Westerfield.

Which car is this, though?

The rebuilt double sheathed cars have a side sill that is narrower than the car body itself, like many rebuilds. This isn't evident in this photo.

The 1916-built steel cars have a stiffener below the side sill that runs from bolster to bolster, so that can't be it either. The best I can tell, they also had ladders instead of individual grab irons.

So the USRA design cars would make sense, especially since there were so many of them. The side sill looks like a match, and the (blurry) build date looks like it's from the '20s. But those cars only had 6 grab irons, not the 7 in the photo.

Although, another look and now I think the blurry lot number might be 414-B. In that case it would be in the 101000-101999 series of box cars, built in 1920 to the basic USRA steel box car design, but with slightly larger dimensions. There isn't an existing model that matches, as it's 1" longer and 6" taller than the other cars built to that general design. This makes some sense since it was built before the 1923 ARA recommended practice (basically the X29 design), since the NYC cars built after that time generally conformed to the ARA recommended dimensions.

Another thing of note is the 5-pointed star under the herald on NYC box cars indicates it is used in grain service. Many of these cars were converted to box cars. They were assigned lots 659-B, 696-B and 718-B. Lot 659-B is available as Westerfield 7951. Note that the model has ladders instead of grab irons. I don't know if any of the double door cars would be in grain service, nor how many of the cars received ladders. I also don't know what industry in Simsbury would have received grain, or if the cars stenciled for grain service were used only in that service.

The northern part of the Canal Line job is interesting during the postwar period. As I noted in this post, YN-3/NY-4 was eliminated by September 1953. Since this was the "Canal Local," what trains worked the job after that date?

Alternate schedules actually started before that time. In Spring of '52 the job was moved to originate in Hartford as YA-1/AY-2 (with 'A' being the symbol for Hartford, and 'Y' Holyoke). By fall of '52, it was back to originating in New Haven.

In fall of '53 it was handled by NX-28 which was a local that originated in Plainville and operated to Westfield.

In fall of '56, the through train is NY-2/YN-1, and the local traffic is handled by NX-25. That's the Cedar Hill - Meriden - New Britain local, and operates to Plainville, plus Collinsville and Westfield as needed.

By fall of '57 NX-28 is now a Hartford to Westfield local, but by fall of the next year NX-28 is gone and Canal Line north freight is being handled by NX-25 again.

In spring of '62 traffic to Simsbury is handled by the (lower) Canal Local, NX-18 at this time, which also handles Collinsville on alternate days. This is the case through at least spring of '65, the latest freight schedule I have.

In this post with several train orders I indicated that I thought the two orders from 1968 were likely for the Holyoke freight. With this new info, I think it was NX-25, or the New Britain local.