I've been continuing my work on the Rapido X31A box cars, but I've seen (or been told in person) several comments about the quality of the casting of the trucks. I found that interesting, since nothing jumped out at me. At least two have mentioned they will use the superior Bowser ones intead.
That piqued my interest, and since I have both I thought I'd compare.
Which do you prefer? I put the same wheelsets in both 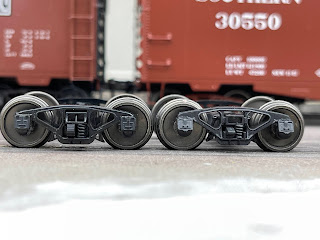 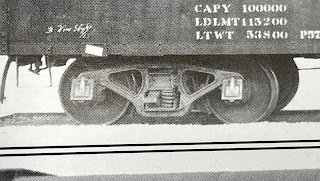 And after I painted them with raw umber oils and stippled in raw umber Pan Pastels. 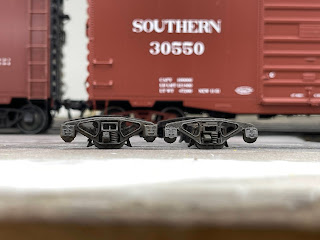 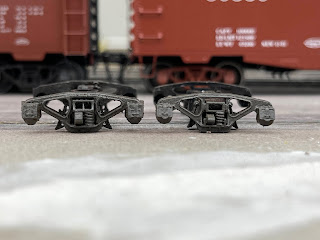 I'll do additional weathering, but I like this as a base.
My thoughts? The Rapido is superior. It's the one on the right.
First let me point out that the Bowser truck is at least a decade old. I don't know when they first produced the car, but it is a very well tooled truck.
It's not easy to see in the photos, but the brake rigging is cast as part of the sideframe, while on the Rapido trucks they are separate parts and in line with the wheel treads.
The bolster is different, with the Rapido one a better match for the prototype, as are the journal box covers.
The Bowser truck is also lacking a spring plank. It's the U-shaped steel sheet that can be seen under the springs in the prototype photo. This spring plank spans the truck between the two side frames. A patent was issued in 1940 for the spring plankless truck design, with the application from 1939, 3-5 years after these cars were built.
Another comment I've heard is that there is no raised lettering on the Rapido truck. Well, there isn't any on the Bowser truck either. But I also haven't been able to find any prototype photos where it is anywhere near as obvious as it is on other types of trucks.
The Bowser truck isn't a bad truck at all. But the Rapido one is quite a good match to the prototype photo. At least to me.
Posted by Randy at 2:11 PM