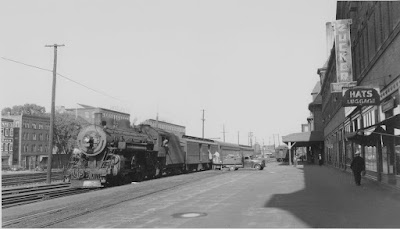 So here's another great shot of the passenger service at New Britain. This one is looking eastbound, showing a good portion of the Railroad Arcade. This was a building built by the railroad at the same time as the station. The building housed stores on the first level, and apartments on the second level. Originally, the station platform extended all the way to Main Street, which is behind where Kent is standing when he took this photo.

On the layout, the station and the arcade are just off the layout. I'll be making a model, or at least a facade, that will connect to the layout for the purpose of taking photos like this one.

The steel baggage car was formerly made as a resin kit by F&C, and rumors persist that Steve will eventually release a one-piece body of it. The second car is the ex-Besler train coach, imported in brass by Crown Custom. The heavyweight looks like one of the series with the taller windows that NKP Brass imported as an O&W coach.

I haven't identified a match for the truck, but it should be easily identified by somebody with more knowledge than me. I'm not sure what the truck is loading/unloading. They have a regular station cart with baggage or perhaps storage mail. Most of the passenger trains through New Britain carry REA traffic, it's just interesting that the truck is not labeled as such. Although it's possible that it is the shipper's truck, and they simply opted to load from their truck, rather than unloading it to the platform before loading it on the baggage car. I also find it interesting that so many of these trains carry REA traffic, since most of the passenger service through New Britain only goes as far as Waterbury (or Hartford eastbound). Train #472 comes from Waterbury to Hartford, and trains #131-136 are Boston to Waterbury and back (which also has an RPO).

In this case, I think it's #463, as the shadows indicate afternoon. During the summer this would be 4:46, (5:46 during daylight savings). This train handled REA traffic from Hartford to Waterbury (assigned 3'). Note that despite the full trees, #1007 still sports its pilot plow.

But one of the reasons I'm always hunting down additional photos of New Britain, despite the large number here at the station is that each different angle may provide a view of something in the background that I don't already have.

In this case a look at the coal and coke sheds for Union Manufacturing: 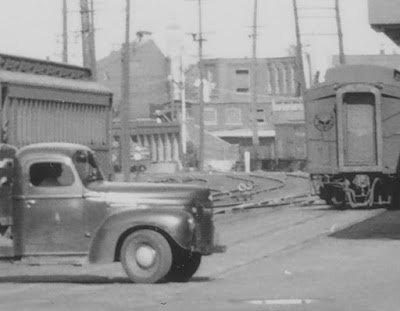 I find these quite interesting. The track is clearly labeled on some maps, and does not have an in-ground hopper for coal to be dumped. Looking at the height of the lower wall, it would appear that they most likely received gondolas of coal and coke that were unloaded by shoveling. At least that's my best guess. There's a gondola (probably coal for the T-2-b 0-6-0 switchers) and what looks like a New Haven double sheathed box car, both on the mechanical department track.

Fortunately, I don't have to worry about unloading the cars, just building the structure and spotting a few gondolas. The are visible in aerial photos, like this one: 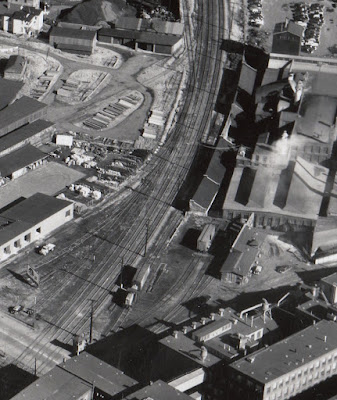 But for the trackside view, that crop of that photo of #1007 is the best I have so far. In the aerial photo (from 1955) you can see a 44-tonner moving a New Haven box car on that track. Another box car is sitting on one of the mechanical department tracks (the same one as the gon and box car above), which used to be inside the engine house here. The workshop and one wall of the old engine house still stands. City Supply and Swift & Upton lumber are across the mainline. The stub track between the mainline and the billboard that now ends at Elm Street used to be to the two yard tracks (#15 and #17) that had, by this time, become a parking lot.

Despite the usefulness of such photos, it's amazing how much you can't see. I'll address something that's hiding in the shadows of that engine house wall in the next post, along with what used to be where those piles of lumber are.