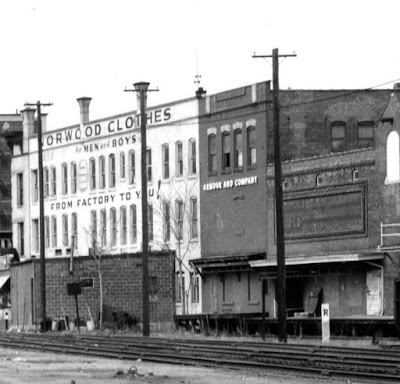 Here's a crop of a photo of New Britain Yard in the late '50s if I recall. It's a good shot to get details around this end of the yard, including the 'ring' post. The employee timetable note that the normal whistle signals for grade crossings were not used in New Britain, so there aren't whistle posts.

But the main reason I made this crop is to get a better look at the Armour and Swift distributorships that both took reefers in my era. Of particular note is the "Swift's" sign, and you can barely make out the word "Swift's" next to three lines of text.

Now at some point, I saw a photo of a Swift distributor with the same sign. My assumption is that it was in an article on meat reefers, or something like that. The three lines of text were yellow and legible, and I thought, "interesting, too bad I won't need that in New Britain."

Aaaannnd then I found this picture. Apparently I did need that sign, and I haven't been able to find the photo since. So if anybody knows what the three lines of text are, or even better, have a photo so I can replicate it, that would be great!
Posted by Randy at 9:49 PM