So I recently picked up the last Bethlehem Steel gondola that I didn't yet own (LV) from Tangent. It's a great looking and great running model, and it reminded me of how a couple of their gondolas don't run well because the wheels scrape the bottom of the car. They have suggested just using a Kadee washer, but I really didn't want to raise the car because I like how low they sit. I haven't taken any measurements to see if they run too low, so maybe that's the correct fix.

In any event, after removing the trucks, I attacked the weight with my Dremel and (what I think is) a routing bit to take off just enough material to make them run freely. It was easy to figure out where to do it, because the wheels had left marks on the bottom of the car. 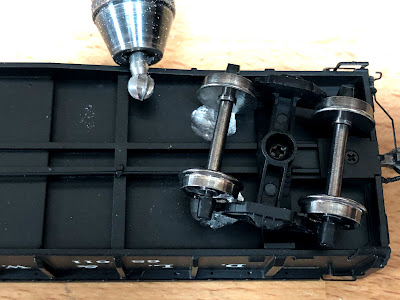 I believe the cars that had the issue were the ACF 70-ton welded cars, and it may have been a single run that had an issue. The Wabash car was the first Tangent model I got and Bill and I were impressed by its rolling characteristics. When a second run was released I picked up the PRR and DL&W car (pictured) and those were the ones that had this problem for me.