The Proto Meet is done, and as always I had a great time and it's something I look forward to every year.

Ops Session
First I wanted to get the layout operational so I could host an ops session on Thursday night. It's something that I want to do annually. Although I really need to get Whiting Street in operation, I decided it didn't make sense to try to cram that in before the show, and worked on the session instead.

Despite a couple of weeks of work, I still had a number of issues to address. One was a bad turnout, that would only stay on the diverging route. Of course, this is a crossover between Track 1 (the mainline) and Track 5. It was easy enough for them to hold it into the correct position when using it, but I don't know why it suddenly stopped working on the night of the session. It's one that has been operational and scenicked for years now.

I've already fixed it, although I'm not exactly sure how. It involved a thorough cleaning (scraping) with a dental tool. trying to adjust (bend) the centering spring, which is under the throwbar, etc. Somewhere along the line it started working again. However, a more permanent fix is planned. More in a moment.

Proto Meet
The most important thing for me is the inspiration I get from seeing the modeling, but more importantly, from friends. The only clinic I got to was the scenicking one in the main room.

Missing clinics wasn't entirely planned, our daughter's nurse was sick this weekend, so I didn't make it back for Saturday evening (I really wanted to go to Bill Welch's clinic) and I missed his clinic on Friday too, because several of the guys wanted to see the layout, but there was enough traffic that we didn't make it back from that and dinner.

But I get a lot out of just seeing old friends, and met some new folks too that I hope to stay in touch with. One of whom is a brakeman that worked the New Britain job in the late '60s, and another was a signal maintainer on the line at the same time. For example, I now have confirmation that the scale track was not only present, but still used even in the '60s. I also learned that even at that late date they switched out Stanley Works twice a day.

I had a number of in-progress things to display, and hopefully that helped some folks who I talked to about what I'm doing and how, and it also led to other ideas about what I can do differently/better.

On Sunday, I was on the layout tour (Chris and I usually alternate, since he's stuck at work every other year). I had a good turnout, and again spent a lot of time with some new friends learning a lot of new things.

The biggest thing I get out of the weekend is motivation to get more happening on the layout (and hopefully the blog), and that's already happened.

First, I want to have more frequent ops sessions. I don't have a set schedule yet, but the biggest challenge I've always had is that everybody else seems to be a good distance away. So I'd like a big list of people to draw from. In addition, I really want to have it open to as many people as possible. I'm hoping for once or twice a month, but it probably won't start until mid to late summer because of the work I'd like to complete first.

But I've set up a newsletter so folks can sign up and be on the list for when the sessions start:

In addition, there are already some changes underway. In the Fafnir section of the layout I had a lot of electrical issues (that weren't there a week before). This probably had something to do with the work I did to separate Stanley Works electrically, and the installation of a circuit breaker. In any event, I didn't get it fully working. But it's also an area that I wasn't always happy with. The bulk of the track was moved from the old Berlin Line section, largely intact. In addition, I've since found a lot more information on the track arrangement on that side of town, and wanted to make some adjustments. 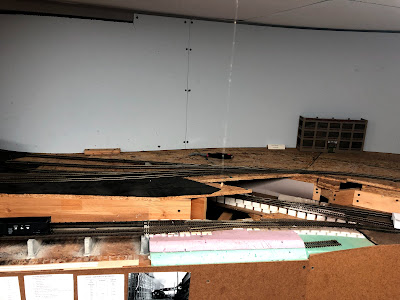 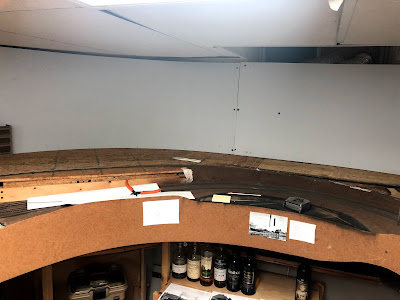 ...I've torn it all up. There are some infrastructure issues (a part of the benchwork is plywood that is slightly lower than the rest because it was never intended to have trackwork on it, for example), and I can adjust Myrtle Street to be a much better arrangement to better fit structures. As a bonus, Stanley Works has a little more room too, so I can make adjustments there too (which looks like it will amount to at least 50% of that track arrangement too).

This is one of the benefits of operating for a while, and in using Microengineering track, since it holds it's shape and most of this track is not securely attached yet. Lockshop Pond may be adjusted a bit as well. Much of the track in this section will just be replaced, because the ME yard track system switches will also save space.

There are three sidings to add to the east side of town too, maybe a fourth. Plus we have to address the changes I've been making to the backdrop and area above the helix. I also need to finish the engine servicing tracks.

Signals and Switches
I'm excited about signalling, because I've learned that prototypically I have three pairs of signals to install. It's Automatic Block territory, so the mainline switches are tied into the signalling system. Because of this, I think I'm going to need to move to some sort of actuation for the mainline switches, since it will be difficult to detect the state of the turnout for the signals otherwise. That's OK, because I also really like how my buddy Dale has his mainline turnout controls locked, and requires a key to unlock them before throwing them.

These are still hand-thrown turnouts on the prototype. So part of my prefers the idea of Blue Point, Bullfrog, or similar control options. I can devise a method to lock the control, and they have contacts for the signals. But if I go with the Rapido powered option, then I automatically have the ability to turn the Rapido switch stands for the mainline switches. Right now I'm also testing Proto:87 Stores option for turning switch stands when throwing the points manually.

While I like that throwing the points directly makes it more intuitive, having only the mainline turnouts on the fascia is a good compromise. And I really like the combination of being able to lock the turnouts, tie into signalling, and operating targets. About half of the mainline switches are already scenicked as well, so it will be a bit of a project.

And, of course, I'll have to build the signals. The Highland is one of the lines with left-hand semaphores. I'm already working on getting the parts for those.

Not all of this has to be done to get the operating sessions running again. The paperwork worked fantastic this time (and I ended up being the Agent, which worked very well since I could easily see what I will change for the future). I'll cover that in more detail in a future post. But there's lots to keep me busy for the next couple of months!