Well I didn't get around to taking any pictures at the NE Proto Meet. But I had a great time. The layout tour went very well. The only issue was that I found out our coffee maker doesn't work. But 18 people signed the guest book and everybody seemed to really enjoy the layout.

Chris hung out up on the deck to direct traffic and chat with the visitors. As expected, they came in a few waves, but never too many to accomodate.

Since the meet Chris decided that we should build the new F&C NH 36' wood box cars. This is a re-release of the old NHRHTA model, although Steve says it's all new castings and it's a one-piece body. Here's most of the parts after flash has been removed: 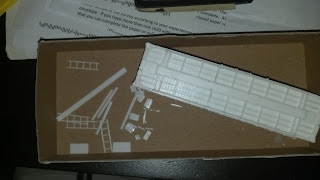 The coupler height is way too low (about 0.07") and the trucks don't clear the crossties. Here it is after the addition of 4 red and one gray washer. I'll build up a bolster by drilling a hole to accomodate a styrene tube to build up a new bolster. I also had to modify the coupler box and file the coupler opening a bit to get it to fit properly.﻿ 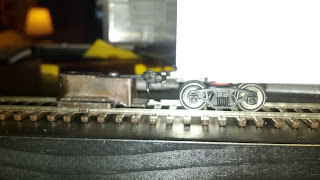