The track gang showed up!

I wandered downstairs this evening, and found myself testing out the track layout for Stanley Works. After two stints in the basement tonight, most of the track is laid: 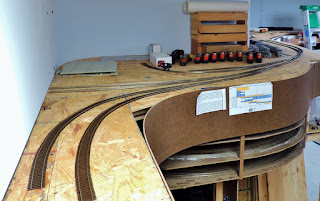 The very sharply curved track is the locomotive track for the Stanley Works HK Porter fireless 0-4-0. There is another industrial siding next to that one.

Just beyond the corner is a runaround, with the left track also serving as an industrial track. Just after these converge at the other end will be a gate and the end of the Stanley Works property. New Haven crews will drop off and pick up beyond that gate, and the Stanley Works crew will do all of the switching in the factory.

There are a couple of missing tracks, but I think it will be enough for operations.
Posted by Randy at 12:24 AM