Getting Ready for More (or Less) Operations

In past operating sessions, the layout has operated well. It's more than exceeding expectations in regards to creating a prototypical operation, complete with a freight agent/yard master. But the reality is, while I know exactly what I want in terms of paperwork, waybills and such, I'm not there yet. In addition, it was also clear that the amount of work can be overwhelming for folks not used to as much switching work. Combine that with the fact that there will soon be a new section of the layout to start testing and working into the ops sessions, it's a good time to create a scaled-back operating session.

So that means reducing the number of trains, and the number of cars to work. While we could just choose some, why not model the traffic in a different year?

In the busiest years, such as early 1947, the amount of work is substantial:


Along with the freights, there are 8 passenger trains through the day.

It still boggles my mind that there was this much traffic through the region. But it is a lot of work to manage. In addition, right now we need to be testing the mechanical aspects of the equipment and layout so I can keep moving with the scenery base. It's also been a while since we've had extensive testing of the layout. A couple of years ago, it was getting regular use, either with ops sessions, or testing and preparation. That hasn't happened in a while.

To me, I'm not just modeling the prototype equipment, track arrangement, structures, and so on. It's been said, "if you're modeling the 1950s, you're modeling 1959 poorly." I understand the sentiment, because if you choose to run equipment that left the roster in 1950 with equipment that didn't exist until 1957, then you aren't modeling 1950 , 1959 or any year in between accurately. And I agree with that assessment.

But it's also quite possible to model the history of the railroad. The infrastructure in New Britain, that is the trackwork, didn't change (much) between 1946 and 1954 when the mainline was single-tracked:

I'm planning on seeing if I can build an insert to cover Lockshop pond. If it works, I'll probably build two - one when the parking lot was being built, and one as a parking lot. It might be a bit more difficult to do the same for the two tracks that became a parking lot in the yard, although the leads remained east of Elm St.

Since the Railroad Arcade will be a facade to be connected to the layout for the purposes of photos, it's easy enough to construct it as modules so I can add the correct storefronts for a given year. 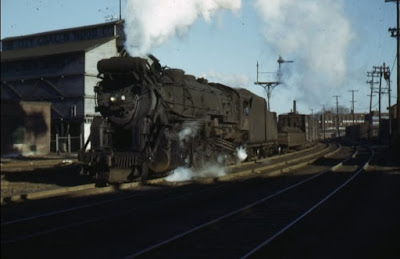 City Coal and Wood will be made removable for the same reason, because it will be very noticeable when it's gone.

Cars and billboards can be switched, and the roster of locomotives and freight cars can be adjusted for the year. The variety of locomotives is one of the particularly interesting thing about the range of years I've selected. The only equipment-related issue that's not easily addressed are the reweigh dates on freight cars. These aren't typically something easily noticed while operating, but I can be selective when taking photos. Although you only see one side of the car during an ops session, so I could put a different reweigh date on each side.

Of course, I love the mix of the '47 session, with big and small steam, along with road and yard diesels in a variety of paint schemes.

If the session ends at 7:00 pm, we could eliminate an A/B/A set and the R-1-b, bringing the total to 11. But in the 1949 session it eliminates the FAs altogether, leaving a total of 8 locomotives.

7:00 am to 7:00 pm
Even-numbered trains are eastbound, odd-numbered trains are westbound.
If we want to, we can run AO-5 at 7.25 pm and YN-1 at 7.30 pm. They pick up the cuts of cars on Track #5 and #6 respectively, and what will make that interesting is working the individual blocks into the existing train.

One final train, passenger #472, is schedules for 9.20 pm, and that one is unique in that it picks up a baggage car that has been sitting in front of New Britain station all day and is full of storage mail.

Overall it's a very easy session to be prepared for in terms of equipment. But even better, it will allow us to focus on testing the switching jobs, which is the primary work on the layout. We've made changes to Stanley Works (more track, and we think we have a better idea of how they operated and interchanged with the New Haven), and Whiting Street makes a big difference in terms of work for the two New Haven switchers.


All of this hides the fact that there's a lot of work during the session, switching out 50-60 cars. The switch crews are classifying, setting out, picking up, weighing some cars, and blocking the outbound trains.

I've been considering splitting the Agent's job into an Agent and Yardmaster job. The Agent would continue to handle the waybills and write out the list of cars and destinations, along with the list of cars to pick up. The Yardmaster would organize that work into switch lists for both NH switching crews. I think that it's more prototypical and will help take some pressure off of the Agent and the switching crews. In other words, in terms of understanding the layout and how to operate it will really require one fully-qualified yardmaster.


The through trains probably don't need two crew members most of the time, but if there is somebody free a brakeman would help when they are dropping off and/or picking up cars. The layout could be operated with as few as 5, and as many as 9.

So that's the current plan. A reduced operating session, probably with simplified paperwork, to get things going sooner rather than later, and hopefully frequently too, for testing purposes. Because once Whiting Street is in, I want to be working on all of the ground cover, ballast, roads and vegetation as soon as possible.