One Word Can Bring You Round...Changes

I already used the Bowie reference, so we'll go with Yes this time.

I mentioned briefly that I'm making some changes around the layout, particularly pretty much the entire west side of the layout. Chris recently asked whether he should alter the positioning of Wethersfield Lumber.

This is really the "art" of model railroading. We rarely have the space to do everything to scale, so compromises must be made. How to make those compromises and still make it look "right" is the art.

I'm clearly willing to make significant changes, at least at this stage where I'm not ripping out lots of scenery to do it. But like Chris, I've been operating these sections of the layout for years. So I know it will work operationally, and now it's really a question of whether it aligns visually. And in some cases, rather than new information, it's that a new approach that didn't occur before presents itself.

A lot of this decision-making process for me is identifying your purpose. I have two primary purposes. Operations and photography.

First is operations. I want the layout to work as closely to the prototype as possible. So that means attempting to have every siding and every switch in a prototypical arrangement. As it turns out, I'm going to be adding quite a few (formerly) missing sidings, but that's for another post. The number of sidings affects the traffic, and the arrangement the actual operations themselves. Sharing the layout in an operational capacity is more important to me than showing it off in an open-house arrangement for viewing only.

Second is photographs. The compromises we have to make to fit the layout in a small space is much easier to hide in a photograph than in person. For example, if you have a road heading into the backdrop, the illusion only really works from one angle. If you design it for the angle you will photograph it (typically one in which railfan photos are available of the prototype), then it will work in photos. In person, the illusion is easily broken. Furthermore, if I decide to use photo backdrops, they also work better in photos, since the photo squishes everything to 2-D, and you can't easily tell the transition from a 3-D model. Of course, the biggest reason is because more people will see the layout in photos online than will be able to see it in person.

But the other aspect is available photographs of the prototype. There are typically common places where photographs are taken of the railroad, and it's these vantage points that inform our understanding (and reinforce our memory) of those locations.

For those that do see it in person, I want it to look great, but I also enjoy the process of modeling. When visiting another layout, I'm always interested in seeing how things have been done. "Looking behind the curtain" is a lot of fun, seeing how a given modeler addressed these sort of compromises. Most of the time I'll have seen the layout in photos first, so this gives me an opportunity to learn new tricks.

Yes, I want to model the scenes as close to prototypically accurate as possible. But knowing that I can't, and understanding my own aims helps me focus in on how I'll model them.


Designing the West Side

The design of the west side has been based on the prototype trackwork, of course, but also upon two primary photos: 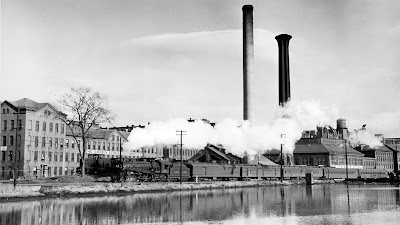 
The first one is obvious, it shows an I-2 with train #131 in front of Lock Shop Pond, with a DEY-4 pushing a load of coal up the Russell & Erwin coal trestle. Corbin Screw is across Myrtle St. in the background. This is how the scene is coming together on the layout. 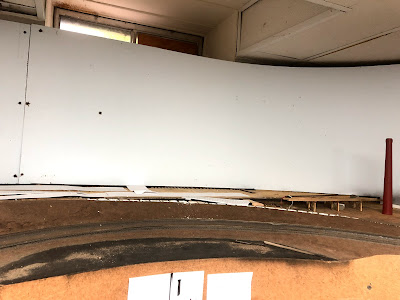 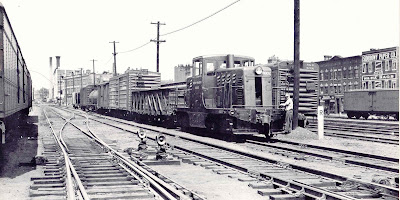 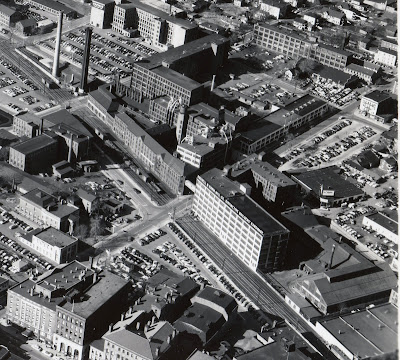 The actual layout of the area shows that you can't see the building between Washington and High Streets. The elimination of this block is probably the second biggest compromise on the layout (the biggest being the elimination of a chunk of the Berlin Line, including several industries, due to it ducking under the helix).

Note that most of the Corbin Screw building is now a parking lot in the aerial photo.

But also note that since there isn't an easy place to take photos between High and Washington Streets, that there aren't nearly as many photos of that building. You can clearly see the parking lot to the right of Washington St, and Kent and Tom McNamara took a great number of photos looking east at the corner of that parking lot and Washington St. So it's also a view that is well known from published photos, which makes it a location I want to model more accurately from a visual standpoint.

There have been a couple of things bothering me about how all this is actually coming together, since I've basically had to eliminate that block on my layout. First is that there is a siding along that building (actually a runaround and a siding off of that). Operationally, that second track in the complex makes quite a difference. So one solution I came up with was to put the siding alongside the building I could do, essentially replacing Washington St. This meant that I could build something resembling the missing structure behind the power plant, and have the two pedestrian bridges over that, since I don't have any Washington St. 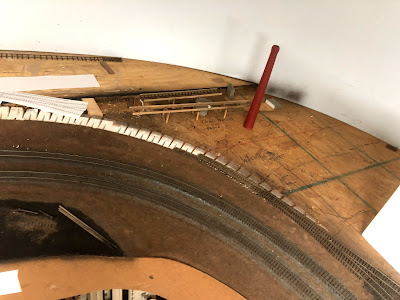 You can see how there's not enough space for a street, a large factory building, and another street. But, in part to make more room to the left for Fafnir Bearing, if I rotate the coal trestles closer to the factory building, I can still build a structure behind the power plant with the pedestrian bridges now over Washington/High St. 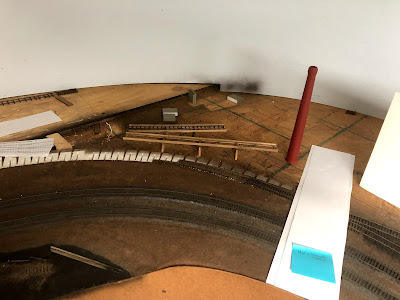 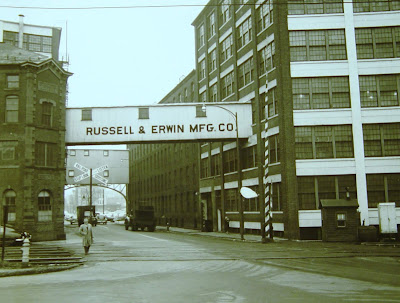 And with a little modification to Lock Shop Pond, I can get the same scenes photographically: 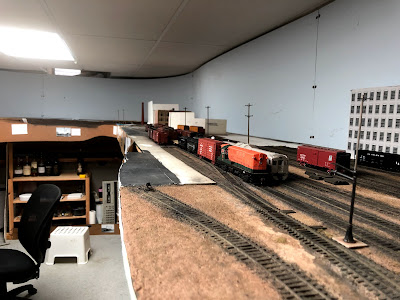 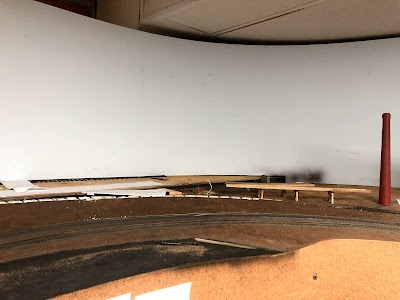 I can also put a second siding along the front of the factory if I want to. It pushes the building back, but it won't change the scene significantly in regards to photos like this one: 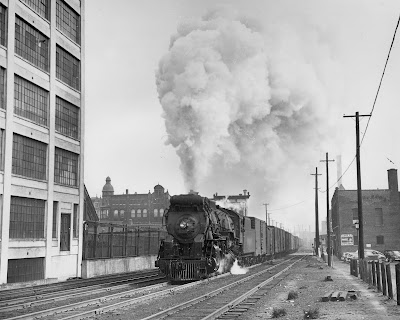 Not much of this will be "right" but it will work for taking photographs in these locations.

All of the changes outside of Stanley Works on the west side of town are entirely due to the visual aspect of how things were fitting together. While driven mostly by the Fafnir Bearing section, it's given me the opportunity to revisit this section and how I'd like to do it. The only real operational improvement is that the coal trestle won't have as steep a grade to climb anymore. I'm hoping to move them as far to the left as possible, and/or shorten one or both to fit the structures in better. But overall I think that this scene will work much better than what I had before and will be worth the bother of ripping it all out to reconfigure.

More on the changes to Stanley Works to come...and modifications to the east side of town too!

Hmmm...since I've totally rebuilt the Berlin Line too, it appears the only section I haven't changed is New Britain Yard, between Main and Elm Streets...
Posted by Randy at 12:08 PM